A teenage girl is the latest victim of a brazen sex attack on a Melbourne tram.

The 14-year-old was on the 96 tram from Southern Cross Station to St Kilda, when the unknown man approached her from behind about 10.30am on Sunday, February 2. 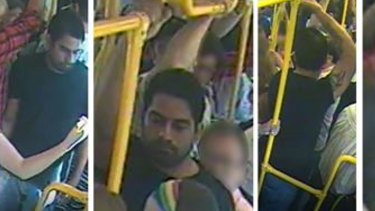 Police want to speak to this man about a sexual assault on a Melbourne tram on February 2.

Police have been told the man sexually assaulted the girl and immediately left the tram in St Kilda.

The alleged attacker was described as being of Indian sub-continental appearance, aged 25 to 30 years old, about180cm tall and with a medium build.

He was wearing a black T-shirt, blue jeans, white runners and has distinctive tribal style tattoos on his upper right arm and forearm.

Police have released images of the man in the hope someone can identify him, however it is not known why it has taken nearly two months since the day of the attack for the images to emerge.

Two of the alleged incidents also occurred on the 96 tram.

Anyone who recognises the man or with any information is urged to contact Crime Stoppers on 1800 333 000 or submit a confidential report online at www.crimestoppersvic.com.au

Hoda Muthana case: Pompeo's team says ISIS bride 'not a US citizen' as attorneys face off

Troian Bellisario: Figuring out what to wear to the Sussex wedding was a ‘nightmare’