Home » Lifestyle » Thanks to social distancing, the drive-in is having a moment

Date nights go back to the future! Thanks to social distancing, the drive-in is having a moment – HANNAH BETTS road-tests retro romance

This car could be systematic, hydromatic, ultramatic! Why it could be Greased Lightnin’!’

The last time I saw Grease, was aged seven in 1978 in Birmingham, with my long-suffering father.

Forty years later, I am watching it on a giant screen in South London with my long-suffering boyfriend. A gale is blowing, and we are sitting in an open-topped car, while I reacquaint myself with the feeling of having popcorn in my cleavage. 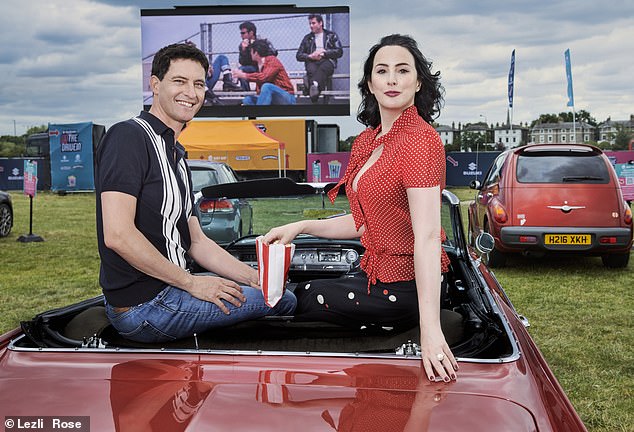 Hannah Betts gives her verdict on attending a drive-in screening of Grease in south London. Pictured: Hannah and Terence

With a social-distancing summer upon us, there will be drive-in concerts, theatre, sport, karaoke, discos, bingo, stand-up comedy and — of course — movies. For here, in Blighty, we will finally have available that staple of American 1950s adolescence: you and your baby on a Saturday night, a milkshake in one hand, popcorn in the other, necking on the front seat of your convertible.

Our chosen set-up, Suzuki Presents @TheDriveIn, will be springing up in 12 cities, including Birmingham, Newcastle, Manchester and Cardiff, until October.

On offer are the delights of Toy Story, The Lion King, Joker, A Star Is Born and Back To The Future. But, come on, how can middle-aged lovebirds opt for anything other than sing-a-long Grease? There’s even a drive-in in the film.

If I sound over-excited, then this can be attributed to the fact that, like the rest of Britain, we haven’t been on a hot date since the beginning of March, before the nation’s diaries became one collective lockdown washout.

Naturally, my beloved and I have spent a lot of time together since then. It’s just that this has in no sense been quality time.

Sure, we’ve worked under the same roof, shared the same tedious meals together, walked the dog. However, there’s been no reason to dress up, dig out my heels or — in his case — engage in any grooming whatsoever. 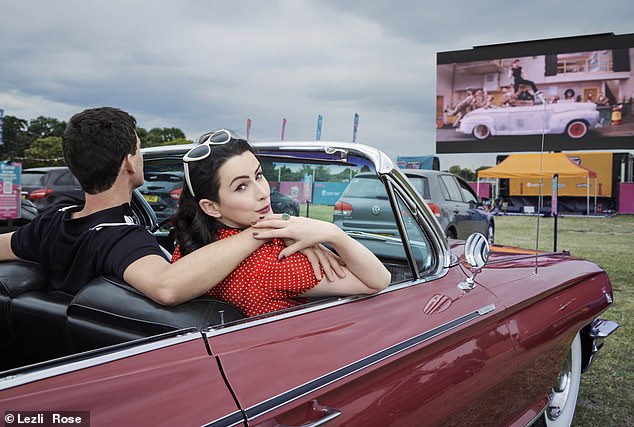 ‘Can you wash your hair, apply deodorant and wear something without food stains?’ I plead. By way of reminder, I inscribe ‘date night’ in the dust obscuring his shaving kit.

Still, four months since our last night on the tiles, I’ve lost track of what I used to do scrubbing-up-wise. I manage to score both of us haircuts (thank the gods) and contrive a cack-handed manicure. Doing my make-up is a joy: from my on-theme Fifties’ eyeliner flick to my cherry lipgloss. However, I’ve forgotten how to put an outfit together, have lost my red bag and can’t find the right earrings.

Will we need coats? Cash (remember cash)? A thermos?

Four other drive-ins worth the trip

The Utility Live drive-in outdoor concert series is offering performances from The Kaiser Chiefs, KT Tunstall and Beverley Knight. Plus, comedy acts and musical theatre, including the West End show Six The Musical (from £61.85 for a car for two people). The events run from now into September, and take place in 12 UK venues. You can bring your own food and drinks (livenation.co.uk).

This month, 4TheFans launched a series of drive-in football events, screening Premier League games in Manchester. The tickets cost £10, with three people allowed per car, as well as half-time match analysis, ‘entertainment surprises’ and access to food and drinks delivery to your car. They are set to announce more in Brighton and Birmingham (4thefans.tv).

Manchester venue EventCity is hosting a summer schedule of Park N Party events at £35 per vehicle. As well as interactive films, including a Mamma Mia! experience, it features in-car pub karaoke, discos and bingo events into August (skiddle.com/groups/parknparty).

Thornton Hall Country Park in North Yorkshire is hosting interactive drive-in events this month. Child-friendly films include Moana, Shrek, The Lion King, Toy Story and Finding Nemo. Plus, other events such as bingo. Tickets cost £28 for the car, with four guests. Order food and drink from an app direct to your car (driveinevents.uk).

How did I ever leave the house pre-corona? Was it always this taxing? It feels like a trip up Everest. And to think we used to sally forth on dates several nights a week.

We take a taxi to Blackheath in South London where our screening will take place. I feel a bit nervy. I’ve forgotten how to flirt, having endured weeks of functional rather than frivolous conversation.

We arrive in a windswept field and clamber into our red 1962 Cadillac Eldorado, borrowed for the occasion. ‘Here’s your ride, Peggy Sue,’ Terence declares, opening the door for me. I hop in, spreading out my circle skirt on the plush leather.

So busy are we admiring our new wheels, we neglect to notice that our entertainment has started, its audio relayed via a little portable wireless (less snazzy modern vehicles listen via their car radio).

The Malibu beach scenes of the film’s opening only confirm that we are very much in South London. It’s not raining. However, the weather will be familiar to anyone who has braved a British seaside resort — brisk, breezy, not exactly the Californian dream.

Ten minutes in, I remember that I never actually liked Grease. Even when I was seven, it seemed sexist and a bit dull. A friend who attended another viewing with her family tells me that they winced over the sexual assault references in this PG-rated — but in no sense PC — retro film.

As for the songs, while the Barry Gibb/Frankie Valli title song is fantastic, all that cod Fifties stuff proves a bit wearing. And, yet, somehow I do appear to know all the lyrics — even the talking bits in Sandra Dee — meaning I never need look at the subtitles.

Not that I’m allowed to sing along, obviously; not in a convertible from where others might hear. When a few stray notes do escape my lips, Terence is the picture of English mortification.

Instead, I am mostly occupied explaining the plot to him, despite there being almost no plot to speak of, and his having seen it several times before. ‘Oh, I see, their relationship was in the past!’ he notes after 45 minutes, as if we were watching Chekhov in the original Russian.

I take to introducing every scene as if for the visually-impaired: ‘They are on a sports track./They are on a date./The entire school is participating in a hand-jive competition — and somehow this isn’t a euphemism.’ 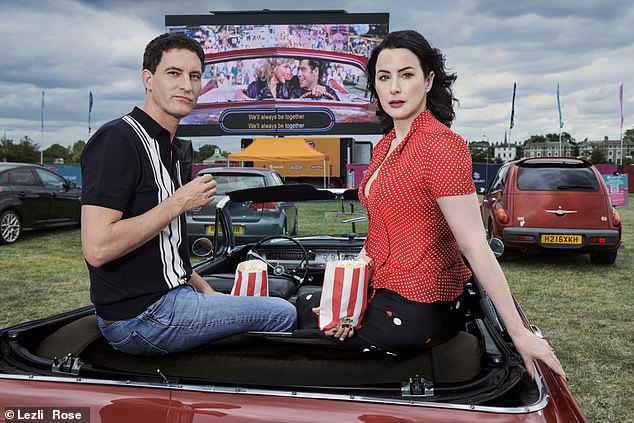 Hannah said the experience was nice for spending time with Terence, that isn’t concerned with whose turn it is to go to the Co-Op. Pictured: Hannah and Terence

‘But, it’s full of 40-year-olds pretending to be teenagers!’ he exclaims. I point out that this is precisely our own situation and we let this one pass.

To add to the surrealness of the scene, starlings line up on top of the drive-in big screen as if trying to reclaim it for nature.

Meanwhile, families wearing joggers sit with their windows steamed up, disconsolately mouthing lyrics, while teenagers in orange cagoules ferry chips to the Priuses. Terence orders a burger but I make him eat squatting next to the Cadillac so he doesn’t destroy it.

On the upside, Grease is mercifully short when you’re almost 50 and not really paying attention: a few snogs, a car race, a dodgy makeover and that’s your lot. Plus, it really is rather nice to spend some time with Terence that isn’t concerned with whose turn it is to go to the Co-Op.

I snuggle into his shoulder, and not purely because he makes such a convenient windbreak.