Home » Lifestyle » The dinner party is no longer serving its purpose

We’re all busy, so, when we want to get together, a dinner party seems the best way to kill multiple birds with one stone. But recently it has come to my attention that the dinner party as we currently know it is no longer serving its purpose.

The last dinner party I attended, the hostess ended up barricading herself in the kitchen when the slow-cooked Greek lamb went awry due to a faulty oven thermometer. She literally shut the door on us all while she called someone in Greece for advice on how to proceed. 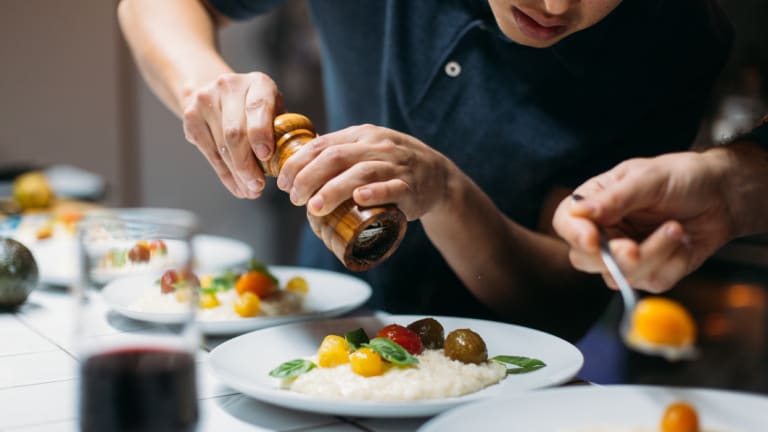 The cook is often banged up in the kitchen.Credit:Shutterstock

Meanwhile, we all sat in the dining room conversing politely about common topics whilst surreptitiously wondering if someone should order in some Thai.

My own most recent dinner party was spent in a lather of sweat over a hot stove, madly whisking Béarnaise sauce to perfection while people took turns to "visit" me in the kitchen (whereupon they would stand in the way of the cutlery drawer).

Then, when finally seated, all I could do was worry about whether or not everyone was having a good time. Every pause in conversation I held my breath hoping it wasn’t a portent to the eventual death of the overall atmosphere. You could say that I’m just uptight, but I’m pretty sure a lot of people have this experience.

It’s the "ready-set-go connect" – your time starts now and ends when everyone stops drinking – aspect.

It’s the forced First World fabulousness of it all.

It’s the way the burden of providing that fabulousness (not to mention the dishes) falls to one person or couple.

It’s the box-ticking belief that social connection will happen if we schedule it for a three-hour window.

I’ve realised recently that the real human connection in my life comes from more unexpected places.

Relaxed nothingness time with people you love is a salve for the soul. So much more so than the perfectly executed dinner party.

Some years back, my sister – a stand-up comedian – returned from six years in the UK. I had missed her and so, as soon as she returned, I didn’t want to waste another minute. In an effort to inveigle my way into some aspect of her life (and also to get some stage time), I made a suggestion that she put some music into her act.

What began partly as an ulterior motive for me to get on a stage with my guitar has gradually evolved into the purest of motives: to spend real, unstructured time with my sister, which still works for us eight years on.

Relaxed nothingness time with people you love is a salve for the soul. So much more so than the perfectly executed dinner party.

Every other weekend, my sister and I meet at the airport and travel to whatever destination her tour demands. Within all this, we simply spend time in each other's company.

My favourite time spent is the pre-show hours in the dressing room. This is where we just "hang around". As an adult, hanging around is a luxury.

Sometimes we do the Good Weekend quiz (with consistently poor results).

Sometimes we don’t talk at all.

Sometimes the only words I hear from the other side of the multi-mirrored dressing room are a despairing cry of: “Dear god, my face.”

But it’s this time in my life, this time spent with my sister just for the sake of it, that sustains me in everything else I do.

As does the time I spend with another friend on our mutual creative project. Catch-ups – of the sort you expect from a dinner party- can happen within that world we are creating together. But scheduled connection is not the raison d'être.

With other "valued players", I now favour a mini-break/holiday with individuals. We used to do group holidays but it’s becoming so difficult to get everyone to commit to the same weekend – husbands have other things on, someone has to stay home for sport – that it just never happens and we never see each other.

So I’ve moved to a new model of designated lady-breaks.

Most recently I had a weekend in Patonga with one of my oldest friends: we played Monopoly (where I was shocked by her 10-year-old’s ruthless, Ron Medich approach to property acquisition), walked around the riverfront picking out the house we’d buy if we won the lottery and watched the final episode of Keli Lane: Exposed in rapt, mutual silence.

It was probably the mutual silence and TV-watching that clinched the deal for me. That resting point where you don’t have to "connect" but you are just there in that moment, together.

Call me weird, but I think that’s what human connection is about.

ECB shuts down one of its websites after hacker attack

Western University student on exchange in Spain hospitalized with coronavirus