Home » Lifestyle » The Emmys Were Extremely White — So Why Did The Show Reward Itself For Diversity?

After the 2018 Emmy Award nominations were announced, Variety noted that 36 of all acting nominations went to performers of color, an entire six more than in 2017 (whatever that’s worth). And the opening number of the Emmys, performed by Kate McKinnon and Kenan Thompson, was all about diversity, or, more specifically, congratulating the Emmy Awards on their diversity. "We’re also celebrating the fact that this year’s Emmy Awards has the most diverse nominees in Emmy history. One step closer to a black Sheldon. We solved it!" Thompson quipped before launching into a musical number that also featured Kristen Bell, Titus Burgess, Ricky Martin, Sterling K. Brown, RuPaul, and Andy Samberg (who was kicked off the stage for being straight, white, and male). "We solved it. We shot with the times. There’s room for all of our voices but mostly Shonda Rhimes," they sang.

And, yes, it was a joke, and all in good fun, but there was a part of the number that rang true. The fact is, the Television Academy and Hollywood does seem to be patting itself on the back for their diversity, when really, they still have a long way to go. And the 2018 Emmy Awards proved as much. 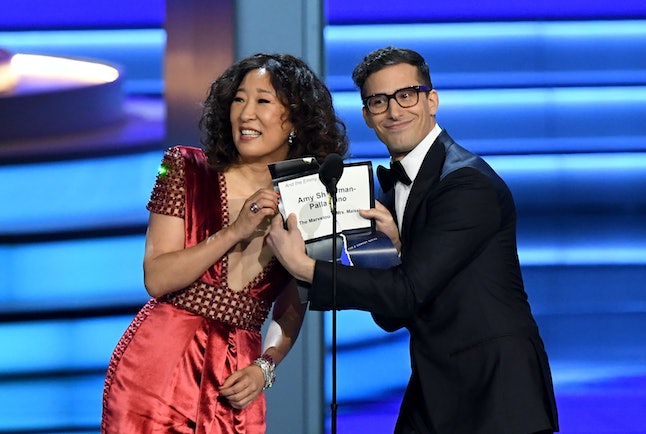 The opening number also made sure to give a shoutout to the history making nominee, Sandra Oh, who became the first Asian woman to be nominated for Outstanding Lead Actress in a Drama Series thanks to her role in Killing Eve. During the bit, Oh turned to the camera, saying, "It’s an honor just to be Asian." And, even though it was meant as a joke, for the first half of the show, it definitely felt as if performers of color were mere props in the diversity tableau the Emmy Awards were trying to paint. The honor of being a minority was, at least for the first hour and a half of televised awards, the only honor nominees of color were awarded.

It’s true that many winners, like Amy Sherman-Palladino, who won three Emmys for Outstanding Directing, Outstanding Writing for a Comedy Series, and Best Comedy Series for her work with The Marvelous Mrs. Maisel, broke barriers in their own right. It’s not everyday that women win awards as showrunners and directors at the Emmys. In fact, Sherman-Palladino became the first woman to win for comedy writing — ever. But even with these glass-ceiling-breaking wins, the parade of all white winners on a night that was constantly congratulating itself on its historic diversity was especially glaring. The fact is that many of the most popular shows of the night are majority white shows. The Marvelous Mrs. Maisel, which took home five awards total, features an all white cast. Game of Thrones, which took home Outstanding Drama Series, is also a majority white cast. And the lack of wins for Atlanta was especially notable.

Thankfully, subsequent wins for Regina King (Outstanding Supporting Actress in a Limited Series or Movie) and Darren Criss (Outstanding Lead Actor in a Limited Series or Movie) helped break the monotonous string of white (and mostly male) winners. As did Thandie Newton’s win for Outstanding Supporting Actress in a Drama Series, and RuPaul’s win for RuPaul’s Drag Race. That said, there was still a lot left to be desired. (Though it should be noted that there were a handful of performers of color who won Emmy Awards this year that were not televised, like Tiffany Haddish and Kenan Thompson, both of whom won for their work on Saturday Night Live.) 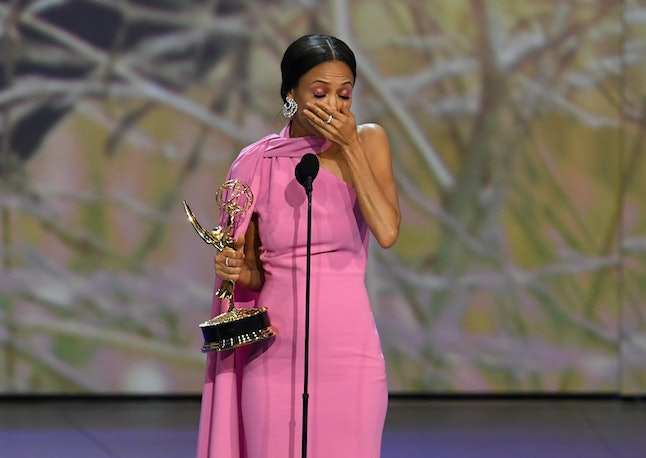 The fact is that a majority of the people on stage at the 2018 Emmy Awards were white, cisgender, straight, and male. And that fact stood out to viewers. So much so that when the Television Academy President Hayma Washington emerged onto the stage and instructed the crowd to congratulate themselves on their own diversity, it felt almost like a farce. "Look around you, and think about who we are honoring tonight. We are more diverse, more inclusive, and more committed than ever to telling stories that represent all of us in 2018," he said. "Let’s give ourselves a hand."

Well, Mr. Washington, we did look around, and while the Emmys might be more diverse than ever, they looked pretty monochromatic to the viewers at home. While Washington’s sentiment, that the Emmys were committed to continuing to honor diverse nominees and stories, is a nice one, what became clear tonight is that audiences are impatient for change. We demand it. And no, we don’t think that you should congratulate yourselves until the job is truly done. Don’t be fooled by the opening number, we have solved nothing, and we will continue to fall short if we don’t continue to expect more from our television and our award shows.

'The Blacklist' Season 9: Is the Real Raymond Reddington Still Alive?

GHD January sales 2019: get 20 per cent off straighteners, hair dryers and stylers