DOMINIC SANDBROOK: Michael Foot was paid by the KGB, but he was more of a patriot than Corbyn the Kremlin stooge will ever be

The late Michael Foot was a very unlikely candidate to be a Soviet spy.

With his thick glasses, long white hair and ubiquitous walking stick, the Labour leader in the early 1980s would have found it impossible to escape notice in a crowd, let alone to lose an enemy tail.

Courteous, idealistic and immensely erudite, Foot was always more interested in writers such as his beloved Jonathan Swift and George Orwell than in nuclear strategy and military secrets. 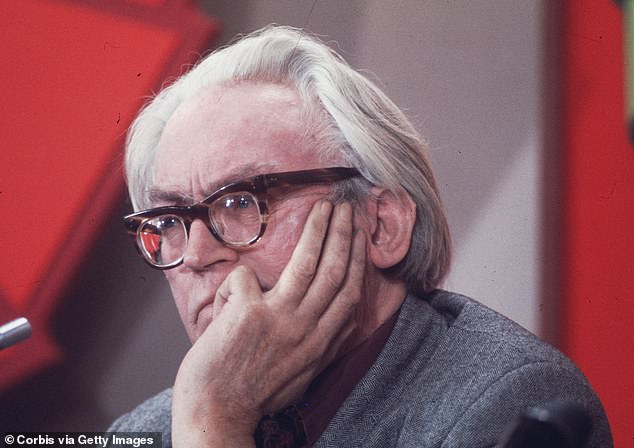 Michael Foot, pictured above, became Labour leader aged 67. He fought the 1983 general election on a socialist manifesto, but resigned days after defeat. In 1985, two years later, a former colonel of the KGB Oleg Gordievsky alleged Foot was ‘their agent’, codenamed Agent BOOT

So when, almost a quarter of a century ago, the Sunday Times accused him of being a KGB informer, Foot was furious.

He sued the paper and won. And that was the end of that — or so it seemed.

Last Saturday, however, the Times began serialising the historian Ben Macintyre’s biography of the double agent Oleg Gordievsky, who spied for Britain inside the KGB from 1974 to 1985.

And to the unbridled fury of Foot’s old allies on the Left, it turns out that the original allegations were almost certainly true.

The story comes directly from Gordievsky himself. Preparing for his new post as the KGB’s top man in London, Gordievsky went through the relevant files and discovered a 300-page thick folder on somebody called Agent Boot — in other words, Foot — who had been meeting KGB contacts for lunch for 20 years.

One page listed payments to Foot, which came to a total of £1,500, the equivalent of more than £37,000 today. And although there was no suggestion that Foot had revealed secrets or betrayed his country, MI6 took Gordievsky’s information very seriously.

They passed it on to the Cabinet Secretary, Sir Robert Armstrong, who decided not to tell the Prime Minister, Margaret Thatcher. But in the meantime MI6 drew up a plan to tell the Queen if Labour won the next election — which, thankfully, they never had to put into effect. 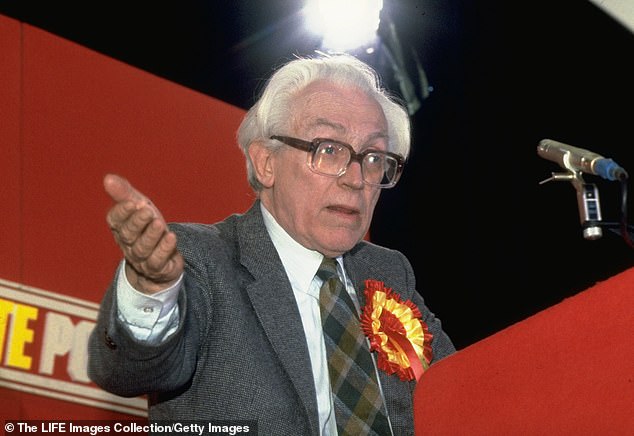 Foot first fought the 1945 election in his home constituency in Plymouth, and won the seat for The Labour Party for the first ever time. He then served in Harold Wilson’s shadow cabinet, before becoming leader himself

When Macintyre published his first extract at the weekend, the Left went ballistic.

‘Michael Foot loved this country. That’s why he wanted to make it better for everyone,’ Jeremy Corbyn tweeted piously. ‘Smearing a dead man, who successfully defended himself when he was alive, is about as low as you can go.’

You’ll note that Mr Corbyn had nothing to say about the substance of the allegations. There is a good reason for that: they are probably true.

There is, after all, a long tradition of high-minded Left-wingers fawning before anti-Western regimes.

Think, for example, of writers like George Bernard Shaw and H. G. Wells, who abased themselves before the monstrous Stalin, or the historians Eric Hobsbawm and Christopher Hill, who closed their eyes to the horrors of the Soviet system. Time and again, supposedly clever people on the bien-pensant Left have fallen into the trap.

Today, for instance, they miss no opportunity to laud their beloved EU over so-called ‘Brexit Britain’, to blame America for all that is wrong in the world, and to find excuses for the latest atrocities by Vladimir Putin’s killers.

As Orwell wrote of their predecessors in the 1940s, they felt it their ‘duty to snigger at every English institution, from horse racing to suet puddings’. All the time they were ‘chipping away at English morale, trying to spread an outlook that was sometimes squashily pacifist, sometimes violently pro-Russian, but always anti-British’.

Did Michael Foot fit into that category? He was certainly very Left-wing, but unlike today’s Labour leadership, he was not an uncritical admirer of anti-Western regimes.

As Macintyre writes, Foot was a ‘peculiar sort of agent’. He did not hide his lunches with Soviet officials. He leaked no secrets. Although he took money, he probably gave it to the Left-wing magazine Tribune. Indeed, he probably never thought of himself an agent, which is why he was so appalled when the story first emerged.

There is no doubt that Foot was immensely foolish. But as Macintyre notes, he ‘retained his intellectual independence’. He was not a Marxist, hated authoritarian regimes and was often very critical of the Soviet Union, fiercely attacking their suppression of the Prague Spring in 1968.

And despite his opposition to nuclear weapons, Foot always remained fervently patriotic. 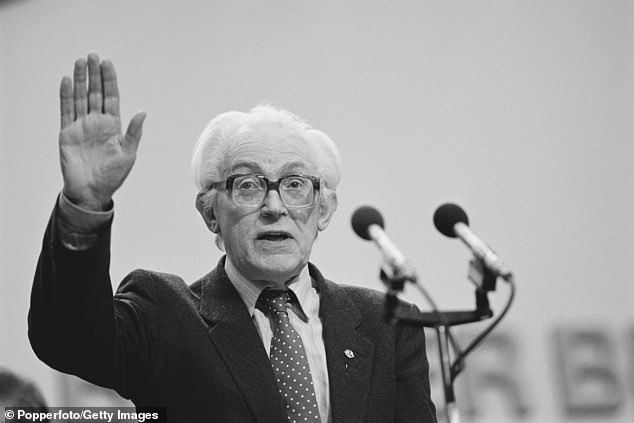 Foot is pictured waving from the platform at the annual Labour Party conference in Brighton, England on 4th October 1983. He was a supporter of British withdrawal from the then European Economic Community

It is often forgotten that when Argentina invaded the Falklands in 1982, Foot was the first to call for an armed British response, for which Mrs Thatcher was always very grateful. There is an obvious contrast here. It is, of course, with the man who currently occupies Foot’s role as Leader of the Opposition.

Like Foot, Jeremy Corbyn flirted with the Communist intelligence services during the Cold War, holding at least three meetings with a Czech secret agent called Jan Dymic. But there the comparisons end.

Foot was always very critical of the Communist bloc. But Mr Corbyn, according to Dymic’s report, was consistently positive about the Soviet Union and regarded the West as the aggressors in the Cold War.

Given Foot’s hatred of authoritarianism, it is impossible to imagine him rushing, as Mr Corbyn did, to find excuses for the appalling Russian assassination attempt on the Skripals in Salisbury.

Similarly, it is impossible to imagine him bleating that Theresa May should seek Russian cooperation in the investigation, which Foot would have seen as a staggeringly unpatriotic thing to say.

It is impossible to imagine Foot, as a critic of the USSR, appearing on the propaganda channel RT — which is funded by the Kremlin and every day pours out anti-Western venom — as Mr Corbyn has done.

It is even harder to imagine him accepting £20,000 to present a phone-in show on Iran’s Press TV, a channel directly funded by a theocratic Islamist regime that suppresses women’s rights, flogs homosexuals and tortures dissidents. Jeremy Corbyn, however, was perfectly happy to take Iran’s money and promote its interests.

Whatever his faults, nobody doubted that Foot hated oppression and was utterly committed to free speech.

By contrast, Jeremy Corbyn has never had a bad word to say about Russia or Iran, let alone the blood-soaked Marxist regimes in Cuba and Venezuela.

Mr Corbyn got two A-levels, (both grade E) and left his North London Polytechnic Trade Union Studies course after a year. The ideas rattling around his head are that the West is always wrong, Israel is the fount of all evil and the Russians are always right.

To expect greater sophistication from him would be like expecting his malevolent Marxist Shadow Chancellor, John McDonnell, to say something positive about British business. 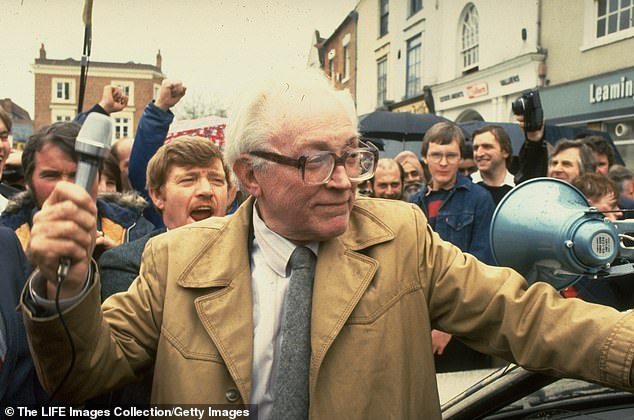 Foot pictured in Market Square in the heat of a general election campaign against the then Prime Minister Margaret Thatcher. He was born in Plymouth, Devon, in July 1913

Above all, Michael Foot would have loathed the thought of Jeremy Corbyn wading in to defend him. For back in the early 1980s, Mr Corbyn could be found among Foot’s most ferocious critics.

At the time, Corbyn and his friends believed that Foot was a traitor, a crypto-Conservative sell-out who had betrayed their beloved messiah, Tony Benn. In return, Foot despised Benn, Corbyn and their far-Left allies. He publicly denounced what he called their ‘sectarian intolerance’, words that could easily be applied to the Labour leadership today.

Michael Foot may have been naïve, but I suspect he would have hated the idea of his party falling into the hands of a man as vain, shallow, ideologically extreme and intellectually non-existent as Corbyn.

And as a patriot, he would have shuddered at the notion that one day his beloved party would be led by a man whose heart lies in Moscow, Tehran and Caracas, not in Britain.

So even if Michael Foot was foolish enough to accept lunch from the KGB, perhaps we should not be too harsh. He would never, ever have accepted lunch from Jeremy Corbyn — he did have some standards.

Head teacher apologises over 'name and shame' board in school

The Real Reasons to Watch 'Solo', Other Than to See Donald Glover as Lando

Lady Gaga Surprises Fans at A Star Is Born Screening