Based on a 2018 novel by Stephen King, the 10-part series The Outsider (Fox Showcase, Monday at 1pm and on demand) pulls off a remarkable high-wire balancing act.

On the one hand, it’s a dead-straight crime drama, with Ben Mendelsohn’s police detective Ralph Anderson wrestling with his own grief over the loss of his only child a year earlier as he investigates a child murder in his sleepy hometown. On the other hand, the chief suspect is a supernatural ghoul. 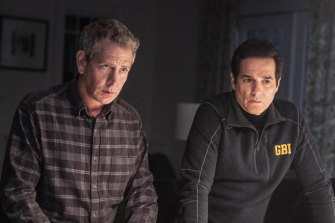 We get an early glimpse of this creature – named by the Hispanic police chief Yunis Sablo (Yul Vazquez) as el cuco after the mythical child eater he grew up fearing – but it’s so fleeting that you might easily miss it, just a dude in a hoody lurking on the fringes of the action.

But as the series progresses, he (or she or it) begins cropping up more frequently – at the scene of a crime that’s about to happen, at the funeral of a victim of a crime that has already happened, in the “imaginings” of a child or the “dreams” of an adult somehow touched by these terrible events. But is he real?

Ralph is struggling to understand how a decent man like schoolteacher and soccer coach Terry Maitland (Jason Bateman, who also directs the first two episodes) could become a killer – and how he could be seen in two places many miles apart at the moment of the murder.

In this week’s seventh episode – directed by Australian Daina Reid – Ralph finds himself the last man standing up for a logical roadmap through this impossible landscape.

“You don’t get to do this anymore Ralph,” says his wife Jeannie (Mare Winningham), who claims to have seen the hooded creature in their house, and whose grief is every bit as real as her husband’s.

“Do what,” he asks, his face a twisted mask of pain and confusion.

“Play like it’s reasonable and rational to ignore everything that’s unreasonable and irrational that’s happening right in front of your face,” she says. “If you guys are going to stop this thing you need to start getting over yourself. If you can’t, or won’t, allow that to happen, then you need to just step to the side. Because right now you’re standing in everyone else’s way.” 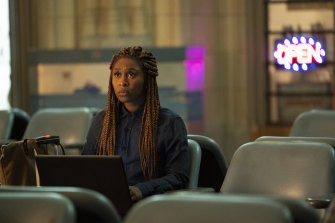 It’s classic King, this eruption of the otherworldly in the midst of Middle American normality. There are echoes of the clown of It! in the hooded creature, not least in its preference for young children. There are shades too of Bob, that representative of generalised evil in David Lynch’s Twin Peaks.

A couple of years ago, I wrote the following in response to the film of King’s killer-clown tale. “That’s the real horror in this version of It!: the cycle of abuse, and the forgetting or repression of any memory of that abuse, which allows for it to resurface and repeat as the victims become perpetrators in adulthood.”

A similar dynamic appears to be at play in The Outsider, where evil is a contagion, passed from carrier to carrier by physical contact, fed by the taking of young victims, and always lurking just out of view.

Seven episodes in, I’m still not sure where this is all heading. But I suspect it won’t be pretty – or completely and comfortingly removed from reality, no matter how ghoulish things get.