Home » Lifestyle » The story of the Sherwood Rangers, the British Band of Brothers 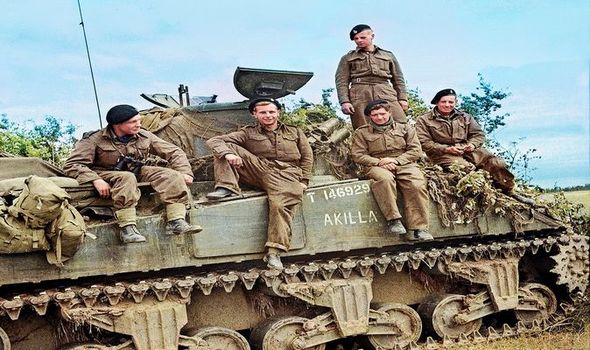 It was July, 19, 1944, in an old farm building near the Normandy town of Caumont, when newly-promoted Captain Bill Wharton of C Squadron, the Sherwood Rangers Yeomanry, found time to sit down and pen a letter to his wife, Marion. “Do you realise, my dear,” he wrote, “that our last summer together was 1939! We married, I haven’t played tennis since then, haven’t seen you in shorts, we haven’t swum or sunbathed together or picked strawberries. What a lot we have to make up for, Darling.”

In fact, he had spent just a month with her since heading overseas with the regiment in January 1940. Back then, the Sherwood Rangers, had only just become full-time soldiers rather than the part-time Territorials they’d been in peacetime.

They’d still had their horses – the Yeomanry regiments such as theirs were the last in the British Army still to be mechanised. After a mounted charge with sabres drawn against Arab insurrectionists in Palestine, they had briefly converted to artillery. In late 1941, while still in the Middle East, they began the process of converting to tanks. A little over 18 months later, having helped lead the way at the Battle of Alamein and fought across Egypt and Libya and up into Tunisia, they were part of the victorious Allied forces that finally kicked the Germans and Italians out of North Africa.

With 12 battle honours to their name, General Montgomery now wanted them for the cross-Channel D-Day invasion of Normandy.

It had been quite a journey for the Sherwood Rangers, and not least for Wharton too. The son of a printer from Retford, Notts, he had joined in the ranks, become a well-regarded non-commissioned officer and so had been given a field commission while still in Egypt.

Now, seven weeks from the start of the Normandy invasion, he had been promoted to Captain and was one of the most popular officers in B Squadron: kindly, affable, unquestionably brave and utterly dependable. How he missed his wife, though. Briefly reunited at the start of the year, they had had four blissful weeks together, the long years apart failing to dim their love for one another. Now Marion was expecting their first child – all the more reason to make it back home.

Being in a tank regiment, however, was a very dangerous occupation. In fact, statistically, he had no chance at all of surviving unscathed, and he had already had his fair share of close calls.

On D-Day itself, June 6, 1944, he had launched his “DD” swimming Sherman tank from the landing craft only for it to sink like a stone. He had been perched on the turret and managed to swim clear but three of the five-man crew had drowned.

Since then, the Sherwood Rangers had been in action almost non-stop, fighting the 12 SS Panzer and Panzer Lehr Divisions, two of the best the Germans had. Even so, on June 26, Major John Semken’s A Squadron t managed to destroy 13 enemy tanks for no loss of their own – with Sergeant George Dring and his crew, in their Sherman, Akilla, single-handedly knocking out two Tigers, one Panther and two Panzer IVs, an astonishing feat.

Nonetheless, the Sherwood Rangers did not always have such good days. Wharton and his crew had been shot at, shelled, mortared, and dodged mines. Tanks were smelly, claustrophobic and crews dreaded being hit and “brewing up”, being incinerated alive as you tried to claw your way out. On June 27, a day after Dring’s record bag, Wharton had seen an entire troop of three tanks knocked out, with several old-timers – and friends – killed.

He’d also rescued his squadron commander that day, jumping clear of his own tank, running over to Major John Hanson-Lawson’s burning Sherman, and dragging both him and another of the crew clear. They were badly burnt and the Major was evacuated back to Britain.

“Yesterday,” he had written to his wife on June 28, “was the most miserable time since we landed. My spirits reach zero when I contemplate the loss of such splendid men.”

There is a persistent impression that compared with what was going on along the Eastern Front, the armies of the Western Allies got off lightly in those final 11 months of the war. In truth, it all depended on which part of the Army a man was serving.

The British way of war – and American, for that matter – was to use technology, global reach, and mass industrialisation to do much of the hard yards and try to keep the actual fighting to a bare minimum. The “steel not flesh” strategy they had adopted before the war had begun was, for the most part, pretty successful, with overall losses fewer than the other major combatant nations despite huge global reach on land, in the air, and at sea.

The British Second Army in Normandy and Northwest Europe, for example, was a spear with a very long shaft but a short, sharp point. It’s easy to imagine the majority were infantry or in tanks or gunners, but in fact service troops made up the biggest proportion at some 43 percent.

Gunners amounted to 22 percent, but infantry just 14 percent and those in tank regiments eight percent. Of this group, only 40 percent were in the three sabre squadrons and reconnaissance troop that made up the fighting component of the Sherwood Rangers and other armoured units.

It was, then, a pretty small proportion but for those in the infantry or in tanks, the chances of getting through unscathed were statistically zero. A staggering 140 percent of those in tanks in the Sherwood Rangers became casualties between D-Day and VE Day. Every tank was hit at some point and whether those inside were unscathed, wounded, badly wounded, or killed was largely a matter of luck. The men understood this too. At the end of July, the Sherwood Rangers were back in the thick of the fighting, this time on Operation Bluecoat, a major drive south from Caumont.

Six days of frenetic fighting saw yet more casualties, although once again, Wharton managed to survive. “I sometimes wonder,” he wrote to Marion on August 5, 1944, “if I am running my luck too far.” Fear gnawed away. Men could take only so much. Five weeks later, Wharton’s B Squadron was badly hit during an operation to cross the Albert Canal in Belgium. Gheel (now Geel) is a largely forgotten battle, but more than eight entire five-man tank crews were killed or wounded and 11 tanks destroyed. Hanson-Lawson’s replacement as squadron commander, Micky Gold, lost an eye and was invalided home.

Bill Wharton made it through but barely recognised the squadron after that. “Again, I have had the bitter experience of seeing some of the best boys go,” he wrote in a letter home, “and that feeling of intense loneliness when I was left to carry on.”

He also had a huge responsibility to bear. Wharton turned 32 that autumn of 1944, but there were 19-year-old troop commanders, and squadron leaders, like Major John Semken, who were just 23.

A tank commander had to have his head and shoulders out of the turret or else they would be effectively blind: periscopes were aw next to useless. That made them vulnerable. Troop commanders had three, then four, tanks to command, squadron leaders 19.

They had to listen to their own crew on the intercom, also the B net radio frequency that connected the squadron, and very often the wider regimental A net as well. They had to spot the faintest sign of movement, be able to read the lie of the land, and concentrate constantly. They had to think how to evolve tactics on the hoof, cooperate with the infantry and make split-second decisions on which the lives of their men often depended.

In summer, when the days were long, they were lucky if they got three or four hours’ sleep. Come winter, they had to deal with the cold, rain, mud, and a host of horrible privations.

The mental and physical strain was immense. How did they do it? And how, amidst the violence and relentless fighting did the men of the Sherwood Rangers manage to keep their humanity? Enough to lay on a special Christmas Day for the children of the Dutch town where they were billeted, or to notice a first snowdrop in spring?

Bill Wharton was one of the lucky ones.

He was sent home on a course in October 1944, returned in January 1945, and was badly wounded amidst the freezing cold and snow of the attack on Heinsberg, a German border town not far from Düsseldorf. For a few days it was touch and go, but he somehow pulled through, and was able to return home to his wife and new baby daughter Pam, his war finally over.

The losses continued, however, right up to the end of the war as the Sherwood Rangers fought on relentlessly. From the long summer days of midsummer in Normandy, to the mud and mire of Geilenkirchen in November, to the big freeze and snow of the New Year, to the battle through the Reichswald, to the crossing of the Rhine to Bremen and then nearly to the gates of Hamburg where the fighting finally stopped.

By that time, they had covered thousands of miles, endured some of the fiercest fighting, and amassed 18 battle honours since D-Day and 30 in the entire war – more than any other single unit in the British Army.

It is impossible not to feel awe for what they went through and what they managed to achieve.

Brothers In Arms: One Legendary Tank Regiment’s Bloody War from D-Day to VE Day by James Holland (Bantam, £25) is out now. For free UK delivery, call Express Bookshop on 020 3176 3832