Home » Lifestyle » ‘The threat grows’: Victoria considering shutting border to all of NSW

Victorian health officials are actively considering shutting the border to travellers from all of NSW, as epidemiologists warn against any delays to pulling that trigger while the coronavirus crisis in Greater Sydney deepens.

Urging Victorians not to cross the Murray, Health Minister Martin Foley said on Thursday that his government was growing increasingly concerned about the potential of COVID-19 leaking out of Sydney into regional NSW.

COVID testing in Fairfield, in Sydney’s west on Thursday.Credit:Kate Geraghty

While Victoria recorded its eighth consecutive day of no COVID-19 cases on Thursday, Greater Sydney recorded 38 new local cases, including 20 who were in the community while infectious.

“We’re concerned that the situation is clearly not heading in the direction that all Australians want NSW to be. The risk grows, and the threat grows,” Mr Foley said.

“Having worked so hard to get to this level that we had in Victoria, we do not need Victorians entering and coming back from NSW, so please do not travel to NSW from Victoria.”

NSW Chief Health Officer Kerry Chant said while the virus had seeped into Sydney’s south-west, singling out Liverpool, Canterbury-Bankstown and Fairfield as areas of concern, the city was also “seeing cases pop up everywhere”. 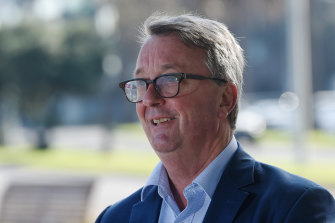 “There’s certainly cause for concern that NSW hasn’t got control of the outbreak at this point. It feels like a very reasonable thing to be on guard for what may happen over the next little while,” Associate Professor Vally said.

“It feels pretty straightforward – if you’ve got a situation you’re concerned about in NSW, and certainly the evidence right now is that they’re in a critical point and it’s unclear what’s going to happen in the next few days, you can see the rationale behind wanting to impose a hard border.”

However, Deakin University chair of epidemiology Catherine Bennett said strict measures, which were not consistent with the risk profile of regional and rural NSW, could be “counter-intuitive” and pose a greater threat.

“To make regional NSW a red zone when they don’t have cases or exposure sites … is pre-emptive and it makes it very difficult for a lot of people without any measurable gains in terms of health protections,” Professor Bennett said.

“This is what the orange zones are for. You’ll probably lose touch with a lot of people if you shut the border to NSW entirely as they’ll be more likely to want to fly under the radar because they don’t want to do 14 days of quarantine.

“You’re better off having something that acknowledged there’s some risk … and identify people and test them, and if it turns out they’ve been to a place that is an exposure site, you have their contact details because they have applied for a permit.”

Mr Foley ruled out easing border restrictions with NSW, and instead warned more areas, apart from border towns, could be declared a red zone.

The state shut the border on New Year’s Eve after the Avalon outbreak but the hard closure led to police resources being over-stretched. Mr Foley said policing a closed border would be different in the future.

“I wouldn’t rule out [a hard border to stop people entering the state altogether] but the Victoria Police advice is that they also have learnt a lot over the course of the last 18 months in terms of how most effective policing is engaged,” Mr Foley said. “Their advice has been that it is more effective for this highly visible, highly mobile, technologically driven responses

“There’s high level of compliance, and increasing presence on big roads, little roads, in between roads along the border as being quite effective.”

Coronavirus restrictions will be eased in Melbourne from 11.59pm on Thursday, bringing the city into line with rules applying to regional Victoria. Under the new rules, mask-wearing will no longer be mandated in schools, or in offices and factories where there is no public interaction.

Stay across the most crucial developments related to the pandemic with the Coronavirus Update. Sign up to receive the weekly newsletter.

How Germany has tested thousands of air passengers for coronavirus