While, as Shakespeare noted, the course of true love never did run smooth, some couples face more obstacles than others. They may have a large age gap, or different religions. They are often told their relationship is bound to fail.

That response is quite common according to Brisbane psychologist Dr Rachel Hannam. “We can be
quite superficial,” she says. “We can look at a couple and think, ‘Oh my gosh, they’re from such different backgrounds!’ Or, ‘They don’t have anything in common.’ It can be so easy to judge a book by its cover and think, ‘Oh, they’ll never last.’ ” 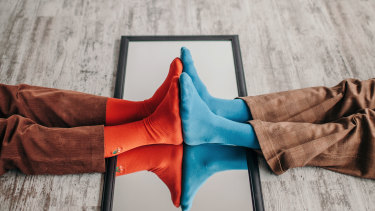 “It just happens that ‘my person’ was born too early. Anyone who knows us knows we are perfectly matched.”Credit:Stocksy

Relationship psychologist Meg Tuohey, from Melbourne, says society is comfortable accepting relationships that fit the norm and those that deviate by “about 10 per cent”. Other couples, though, are often dismissed. “The fact that it’s true love isn’t accepted at first glance because it doesn’t fit the cultural narrative,” she says.

But such relationships can work. Santina, from Sydney, knows this first hand. She was 27 when she met her future husband, Will, who was 46, at work. While she noticed the age gap at first, once she got to know him she said it “didn’t matter at all”.

But it mattered to other people. One night, when the couple went out to dinner, an older woman started yelling, “It’s just not right! He’s old enough to be her father!”

Santina calls these comments, and others like them, an “honest mistake, not malice. It’s just what ‘normal’ looks like.”Some remarks are more barbed.

On her wedding day, Santina’s mother voiced concern that her daughter’s nuptials had an expiration date, saying, “It could probably work for 10 years, but after that the age difference will just be too noticeable.” The fact that Santina and Will’s relationship is still thriving 17 years after they met is testament to how far off the mark she was.

While Santina doesn’t take these digs to heart, she’s sick of the tired trope that her husband must be  a dirty old man while she must be a gold-digger. “I love the idea of changing the conversation, because this is very normal for me. It’s not society’s business.”

Hannam agrees with her. Besides, she says, people aren’t very good at appraising others’ relationships.

“I always say, let them judge. Other people can think what they like. No one can know what it’s like to be on the inside of your relationship. You can’t control what other people think, so you’ve got to stop trying.”

Santina has done just that. “It just happens that ‘my person’ was born too early,” she says. “Anyone who knows us knows we are perfectly matched and connected.”

Religion may seem an even greater challenge than age. But it’s not insurmountable, says 38-year-old Maya*, a moderately religious Hindu from Sydney. She met her future husband Jacob*, 43, who’s Christian, through a dating website in 2015. Both had been married to partners from the same religions as themselves. “So we’d gotten our heads around the fact that you can tick all those boxes and it still doesn’t work out.”

They couple have always supported each other in their respective religious beliefs. Maya often accompanies Jacob to church on a Sunday, and Jacob joins Maya at her temple. Neither expects the other to “pray, or anything like that”, Maya says.

Maya believes their greatest challenge will be when they welcome their first baby this year. The couple plan to introduce their offspring to both religions, and say neither would mind too much which one their children relate to. She hopes this plan goes smoothly. “Obviously, life would probably be easier if we both were the same religion.”

“I always tell couples they need to write their own script. If they want to make the marriage work, sometimes they have to choose between their family’s expectations and their spouse.

It’s a hard choice: ‘Do I fall back into the beliefs and expectations of my family of origin? Or do I rewrite the script and make a new set of rules and world for myself and my partner?’ ”

While that may sound like a recipe for a family rift, Hannam says, “Blood is thicker than water, and 99 per cent of the time parents are going to eventually accept your decision to break away from your family’s culture or religion.”

And then there’s the long-distance relationship. Being physically separated can drive a wedge into even the most loving union, says Tuohey. Such couples are often told they’ll never last, and this is commonly the case – unless there is an end date in sight. Without sharing space intimately
with a loved one on a regular basis, she says it’s harder to fill those “connection buckets”.

Meanwhile, couples that seem “mismatched” can also bear the brunt of being told they’re doomed to fail. For example, one might be a raging extrovert while the other is more reclusive.

Differences in physical ability can also cause people to assume a relationship won’t survive – let alone get off the ground.

Take the case of 26-year-old Shane Burcaw from Pennsylvania, who has spinal muscular atrophy and uses a wheelchair, while his girlfriend Hannah, 23, is able-bodied. Burcaw, author of Laughing at My Nightmare, has said this often leads people to assume she is his carer.

“If I saw two young people out having a nice meal together, I would probably assume that they were dating,” he wrote in a column for The Morning Call website. “This, however, does not seem to be the assumption people make when you throw a wheelchair into the picture.” Burcaw added, “We never
think twice about the fact that our relationship is abnormal in any way. We simply make it work.”
When couples seem mismatched, they no longer fit into the prescribed view we have of love, says Tuohey. Because people can’t wrap their heads around how such couples work, they often assume

There was no glaring obstacle in the path to enduring love for Lisa and Brett from Melbourne, yet they still copped plenty of unsolicited advice about how they’d never stay together long-term. That’s because they started dating as 12-year-olds and, apart from a brief break when they were 14, have been a couple ever since.

Over the years, Lisa, now 38, has weathered a barrage of comments, which usually follow the same well-worn path: “Oh my god, how could you be with the same person for so long? Don’t you get bored? Don’t you feel like you’ve missed out?”

When they announced they were getting married in their early 20s, people gratuitously warned them that childhood sweethearts have a “really high” divorce rate.

Lisa brushed off these biting observations: “I’m not just going to follow the crowd or wreck something that really works for me in my life because of what other people say.”

Now a mother of two, Lisa believes finding her true love as a pre-teen was incredibly special, not a drawback. “As long as the relationship works for the people involved, and it’s not hurting anyone else, that’s all that matters.”

Tuohey couldn’t agree more. In fact, she says that couples who have been told they’re bound to fail often develop an “us against the world” mentality which draws them even closer together, causing them to “thrive in the face of cultural rejection”.

“Couples that are in love against all odds have a fight to protect what is sacred to them,” she says. “They can protect the sanctity of their love by keeping their belief that they are perfect just the way they are.”

This article appears in Sunday Life magazine within the Sun-Herald and the Sunday Age on sale November 17.