Over the coming days, it is not hard to predict that this remark will be repeated in online forums and conversations around Victoria when the talk turns to this week’s IBAC hearings into branch stacking in the Labor Party.

In June last year The Age’s reporting brought us the extraordinary inside story of what then Victorian government minister Adem Somyurek called a “stackathon”, with Mr Somyurek and his supporters at its heart. Premier Daniel Andrews emerged almost unscathed, in part because he moved swiftly to sack Mr Somyurek as a minister and also because the secret recordings obtained by The Age showed Mr Somyurek’s utter contempt for the party’s leader. But another reason, and perhaps the most important, is that, as The Age’s reporting also revealed, the Liberal opposition had its own extensive branch-stacking operation. 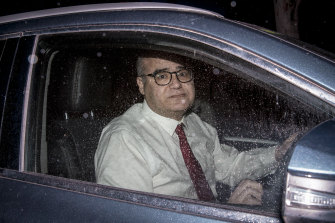 After the recent fall of NSW premier Gladys Berejiklian at the hands of her state’s anti-corruption body, the Independent Broad-based Anti-corruption Commission hearings in Melbourne and reaction to them will be keenly watched here and in Canberra by politicians of every stripe anxious to discern whether the public really has had a gutful of this sort of chicanery.

Since neither branch stacking nor a small amount of factional work by MPs’ staff is illegal, IBAC’s inquiry is focused on misuse of taxpayers’ money for “party‐political work or other improper purposes”. But even as a fourth minister quit this week over the allegations, IBAC Commissioner Robert Redlich was moved to ask how it was that nothing seemed to have changed since the “red shirts” scandal during Labor’s first term, which revealed the misuse of public funds to pay for ALP campaign staff in the lead-up to the 2014 Victorian election.

Beyond serious questions surrounding the police investigations at the time, the answer is that Mr Andrews and his government were returned in a landslide in 2018. For such behaviour to change, it has to have a demonstrable cost at the ballot box.

But before corruption can even become an electoral issue it has to be brought to light. The role of federal Labor MP Anthony Byrne – a whistleblower who owed his seat in Federal Parliament to Mr Somyurek’s powers of recruitment – has been crucial. The Age believes that these matters must be reported in depth and with prominence because until we address them as a community, it will be impossible to tackle wider problems in our political life.

Complaints about the decline of trust in our politicians, the quality and diversity of the people we elect to our parliaments and the resultant fraying of our democracy all point to the dangers of treating corruption as something that’s simply a fact of life in politics. Until we clean up the processes by which candidates are selected and seated, we will keep getting parliamentarians with no real incentive to do the right thing and whose primary loyalty is to powerbrokers.

When politics is the game of a few, done primarily in back rooms by “faceless men” and women, decisions vital to our future will take place out of sight. It is why we have covered IBAC’s repeated calls for greater resources and powers and argued that a federal anti-corruption body with teeth is essential if we are to be taken seriously as a nation on issues of governance.

Mr Andrews has said this week that it remains to be seen if “more needs to be done” to address this problem and that he will await the outcome of IBAC’s inquiry – a line echoed by federal Labor leaders. This has been a persistent problem in Labor, but it has ramped up in recent years. In its current iteration, as The Age has reported, issues, including the possible misuse of grants to community groups, were being raised in late 2017 and early 2018, “but instead of referring the matter to an external investigator or agency, a decision was made to deal with the issue inside [the Andrews] government”.

This inquiry will no doubt provide us with significant new and lurid details, but The Age believes the verdict is already in on the need to stamp out ethnic branch stacking in Labor. Yes, they all do it. What are we going to do to stop it?

Peabody Awards Cancel Ceremony; Nominees to Come in May

Dozens of bodies are left on the streets of Ecuadorian city