An incredible six-bedroom estate in Surrey has gone on the market for £2.95 million – and it was reportedly where King Henry VIII enjoyed trysts with his future bride Anne Boleyn.

The property, known as Addington House, is one of Britain’s oldest – dating back to the 15th century and is located near Croydon.

The Leigh family were the Lords of the Manor during the 1400s -1600s, when it included Addington House Farm, which formed part of the hunting grounds for Henry VIII.

But it’s also believed the former King of England used underground tunnels linking the manor houses of Addington to Wickham Court to reach Anne Boleyn when she was staying with her family at the latter.

A stained glass window in Wickham Court celebrates the pair’s engagement – but as is well-known, things didn’t quite work out between the pair, with the former queen eventually getting beheaded at her husband’s orders.

Addington House has been continuously inhabited and was a working farm up until the 1960s. 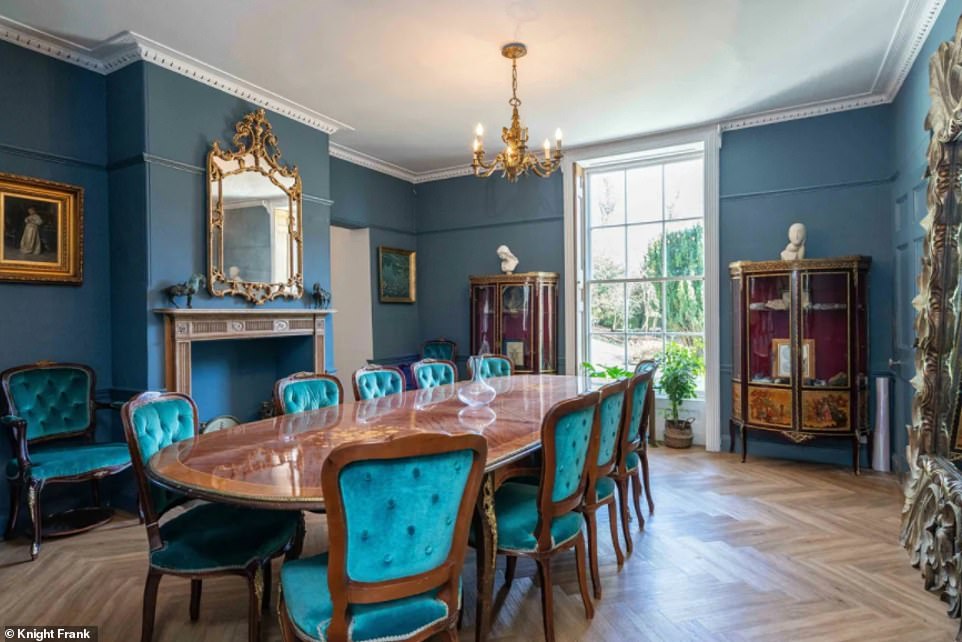 Addington House, located in Surrey, near Croydon, has just hit the market, priced at £2.95 million. It used be the summer home of several archbishops of Canterbury, and was used as a secret connection point for Henry VIII and Anne Boleyn before they got married 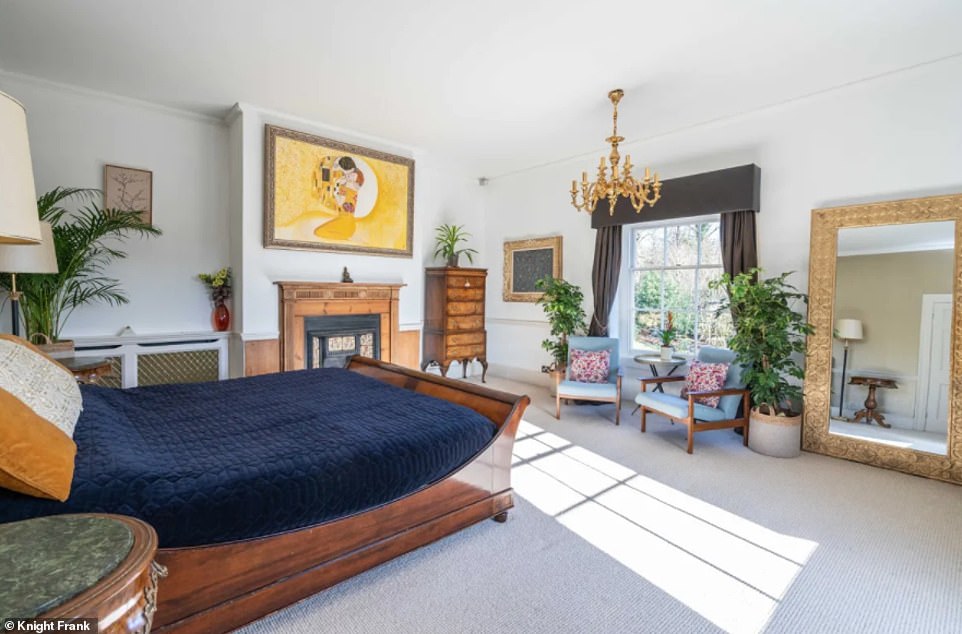 The last owners of Addington House completely refurbished it to modern standards but made sure to keep its original charms with period furniture in all six bedrooms, with dark wood beds, large mirrors and chest of drawers and chandeliers 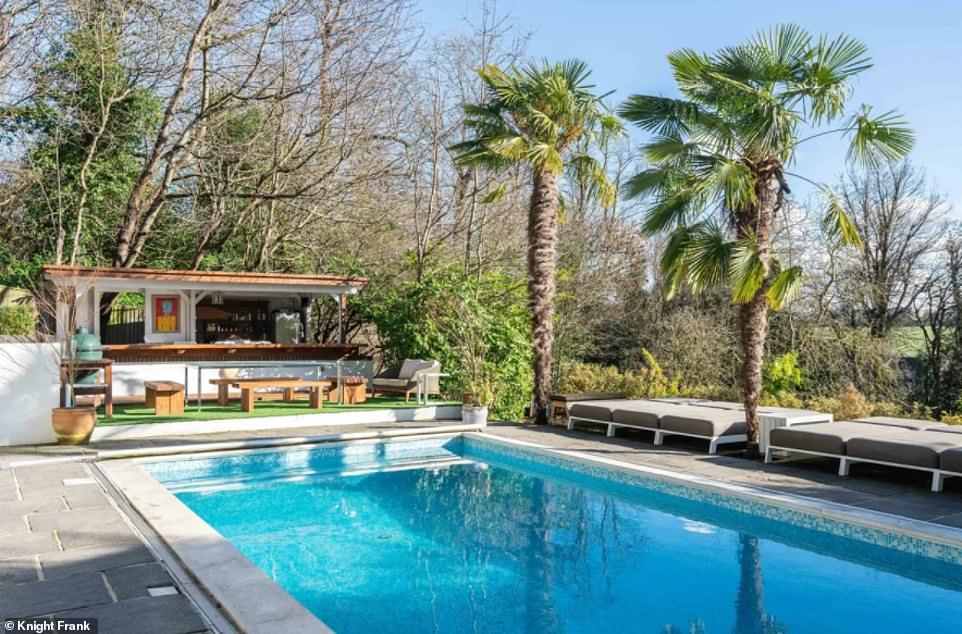 Nestled away on secluded grounds approaching 1.3 acres in the Addington Village Conservation Area, it was also formerly the summer home of the Archbishop of Canterbury and part of the Addington Palace estate – but ceased being a manor in 1807.

Since the original Addington Palace fell into disrepair and was replaced with a newer palace in 1780, Addington House is the only ancient house of the original set to remain.

The 8,257 sqft abode has been updated throughout in 2018 but still retains some of its original features which make its charm, including medieval beams, inglenook fireplaces, staircases dating back to the 15th-16th century and a Tudor bread oven.

Today, the Grade II listed abode is awaiting its next master, and offers a mix of lavish period decor  and modern luxuries such as a cinema room, a wellness suite, a golf course and six reception rooms including a games room and a former brewery turned into a music room.

Knight Frank, who are bringing the house to the market, describe Addington as an ‘enchanting property.’

Having been extended over the centuries, it offers an impressive entrance hall, seven reception rooms, a traditional kitchen, a utility room and two cloakrooms. 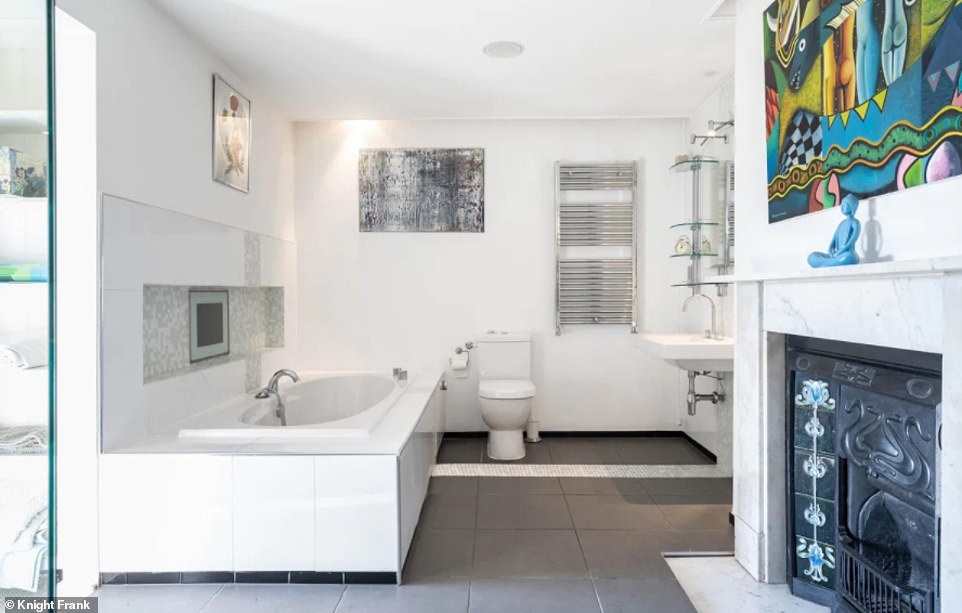 The house has three bathrooms, which have all be redone to modern standard and are all large, with all the fittings – including TV in the bath) 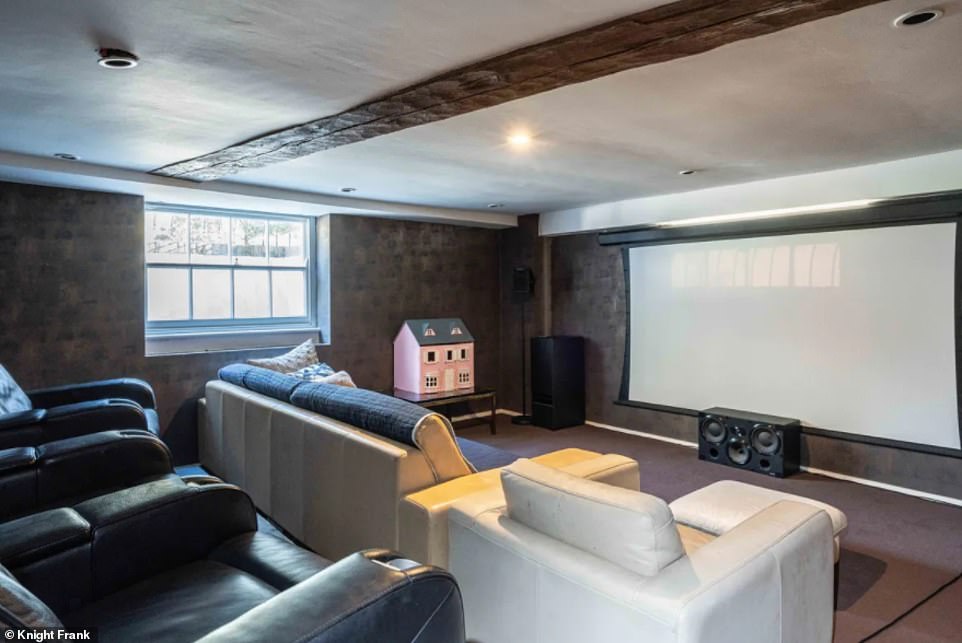 The house’s original cellar, with apparent brick work, was turned into a cinema room. It also holds a sauna and actual wine storage space

There’s also a party/music room which was formerly a brewhouse – and that’s just the ground floor.

On the lower floor, you’ll find a cinema room, games room and wellness suite as well as a magnificent wine cellar with beautiful exposed brickwork.

The first floor features six large bedrooms, including a spectacular principal suite with a dressing room and bathroom while there are a further two contemporary bathrooms on the upper floor. 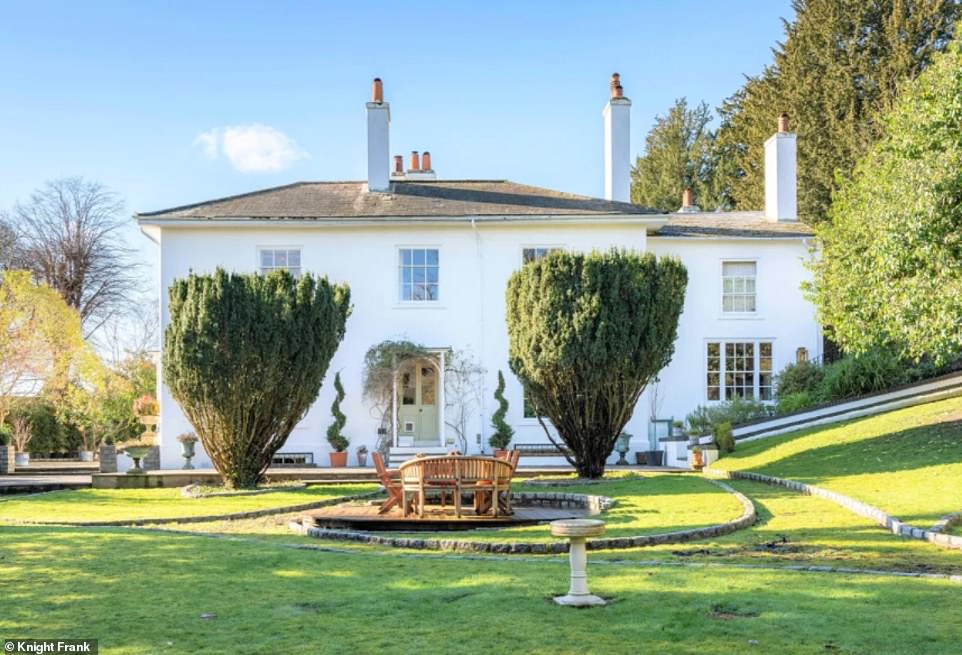 Addington House as seen from outside. The property is surrounded by trees dating back to 500 years ago and is secluded from noise and other people 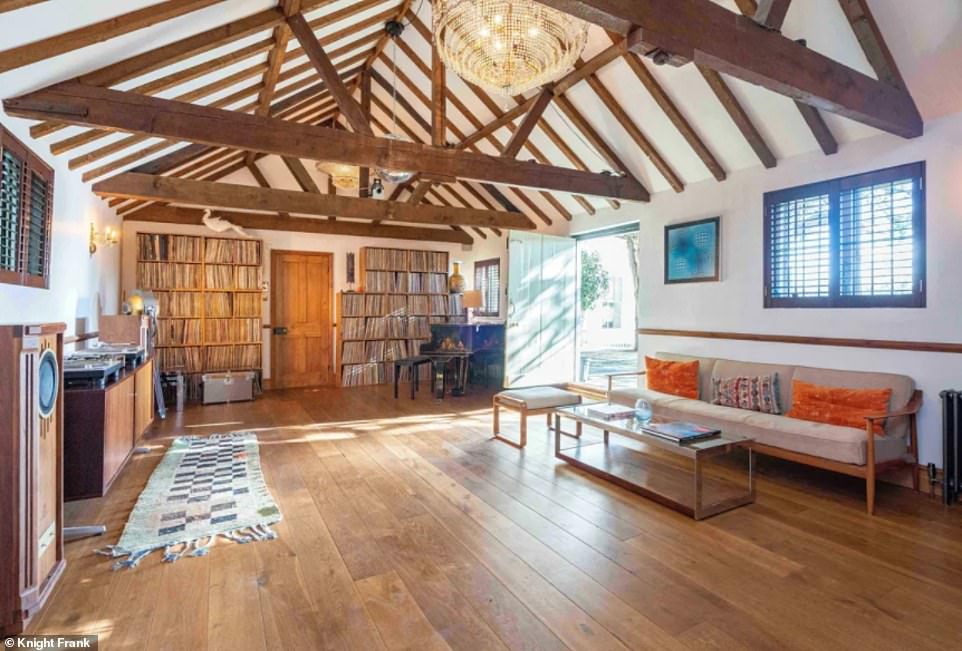 A beautiful library and reading room located near the garage ofAddington House. The property is secluded and comes with a triple garage with loft space above 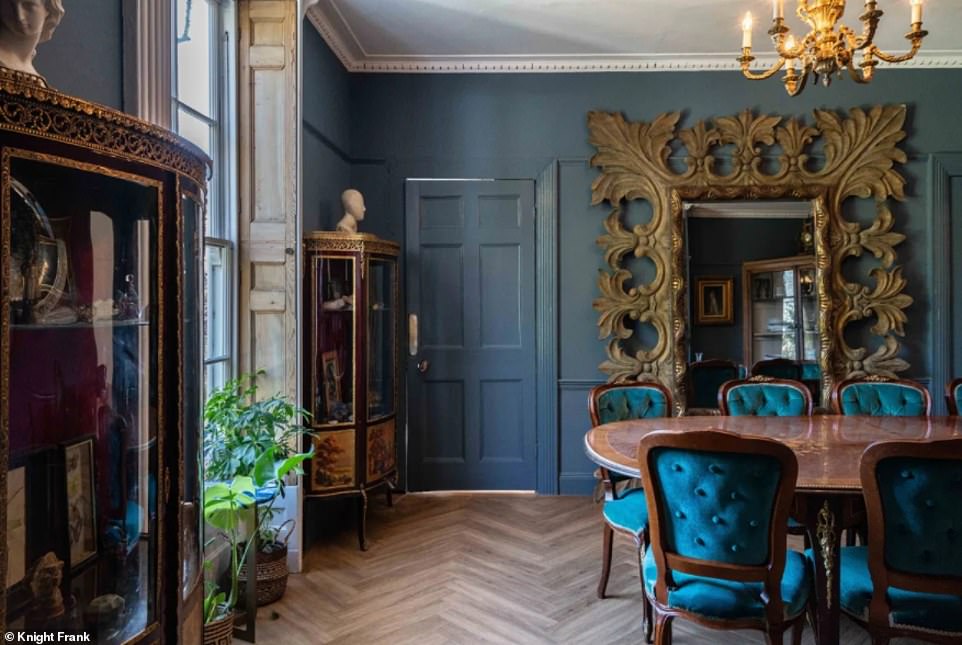 The previous owners have repainted and refurbished Addington House (like this dining-room, which they painted petrol blue) but have tried to preserve its character

The house is secluded, surrounded by perfectly curated gardens and benefits from a triple garage with a loft space above.

Just like the house, the land also is a mix of new plants and old ones. You’ll find walnut tree, lime tree, fig tree and various yew trees thought to be over 500 years old on the grounds.

As if that wasn’t enough, there’s also an outside entertaining area equipped with a heated swimming pool and a bar – perfect for lazy sunny days. 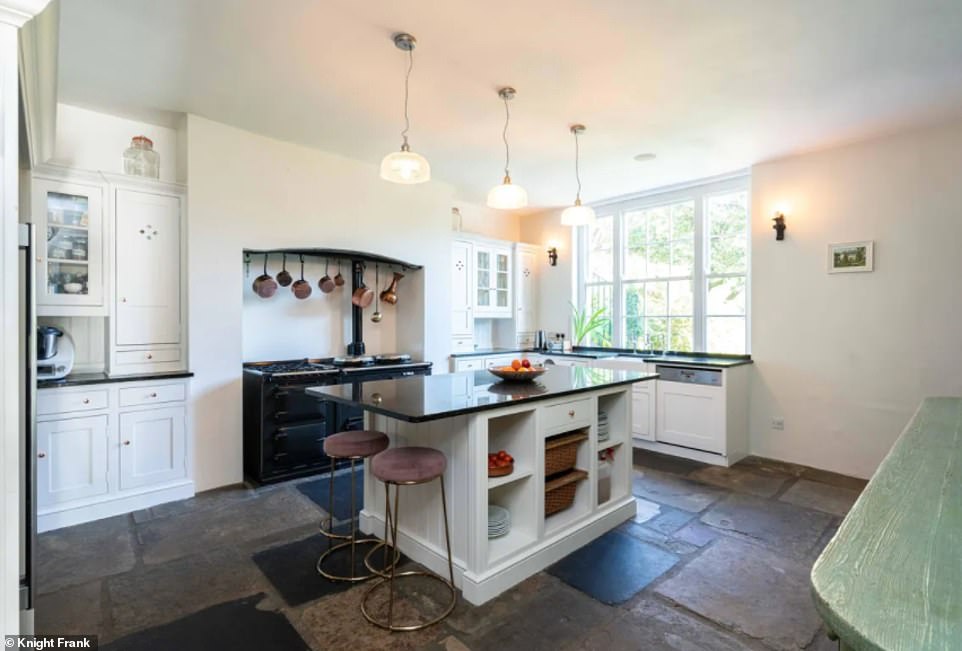 The kitchen still holds a Tudor bread oven (in black) as well as all the modern cooking equipment. The flagpole floors date back to the 11th century 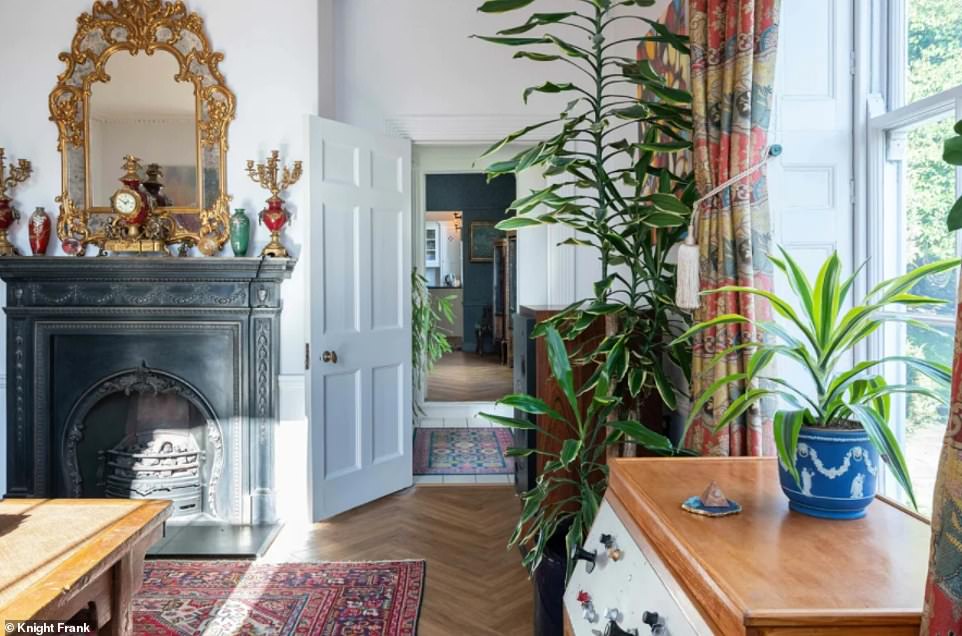 The fireplace, left, are from origin, and the house’s staircases date back from the 16th and 17th century. Original brockwork was also preserved 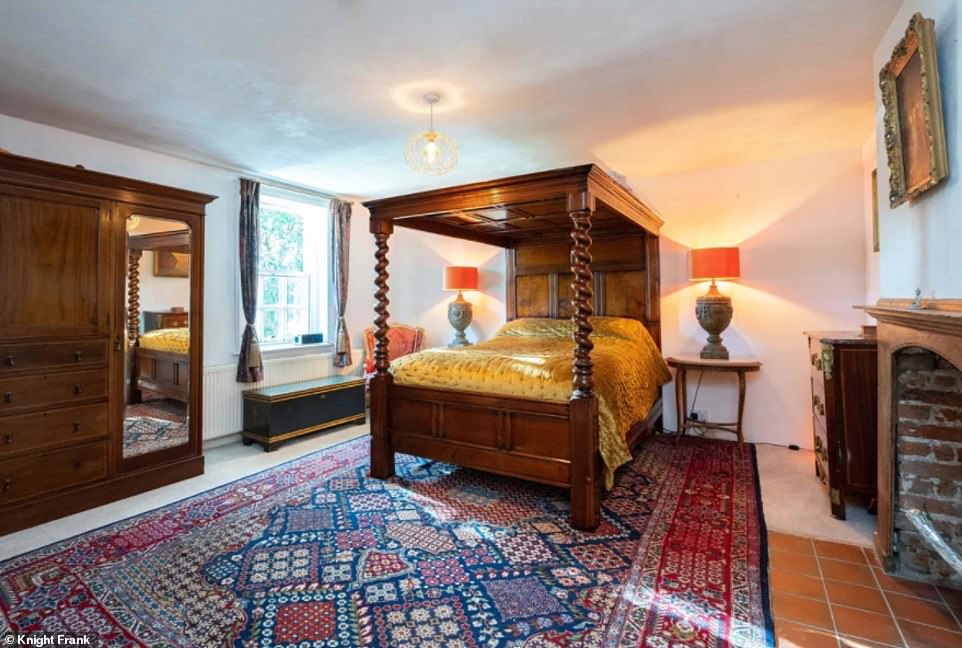 Another of the rooms on the property, with a wooden poster bed and matching wardrobe and a fireplace of origin. The bedrooms are evenly divided between the first and second floor of the property 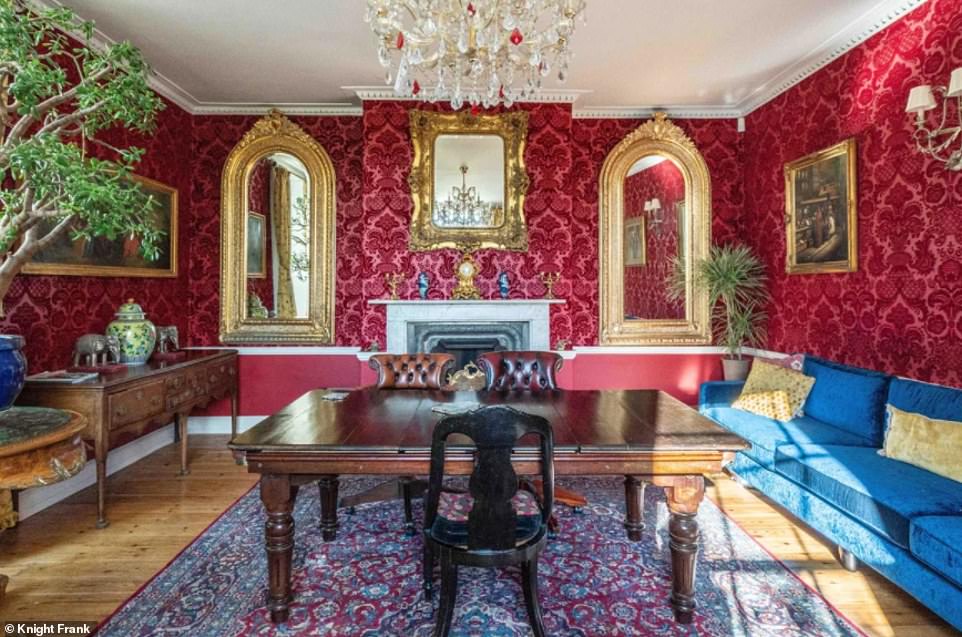 One of the reception rooms was turned into a snug study and fitted with red velvet wallpaper, luxury rugs and dark wood furnishings to add some character 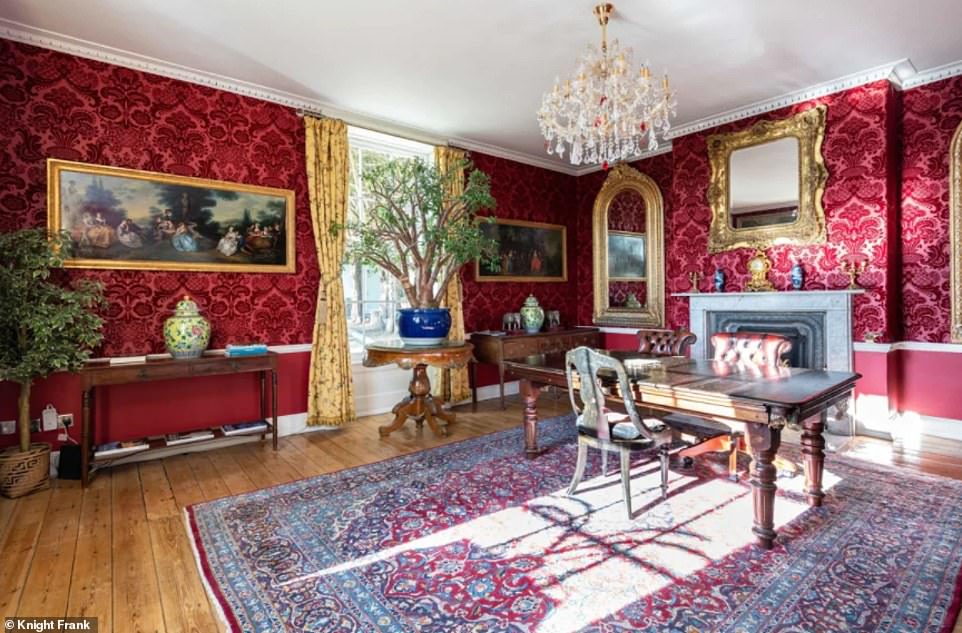 Another view of the study, which receives plenty of light and was furnished with period items and mirrors. The property is surrounded by acres of beautiful greenery

9 risky movie recastings that paid off