Three Fat Virgins Unassembled is a brutal and blazingly funny examination of the role of women in society, written by best-selling novelist Ovidia Yu. It revolves around three characters meeting for tea at one of Singapore’s classy hotels, there to share stories, to complain about husbands and bosses, children and parents. 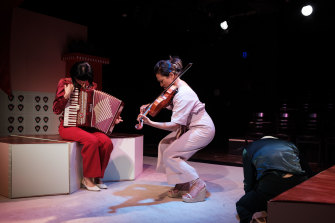 The husband who tells his wife how lucky she is before going to see his mistress. The boss who enjoys watching his colleague squirm through a faux-casual conversation about his upcoming massage. The mother who threatens her daughter with apocalyptic acne if she doesn’t finish her dinner.

Tiffany Wong, director and producer of Slanted Theatre, has brought together a cast and crew that crackles with talent and energy. The four performers, in crazy rich Asian couture and vertiginous high heels (costumes and set by Sarah Amin), jump from character to character at lightning speed, with a gesture or a word. “I am a man,” says a magisterial Happy Feraren, immaculate in white. And she is, instantly.

“I am fat,” says Caroline George, who is anything but, as she tries to turn down another cake. “I am a waiting for someone,” says Sabrina Chan d’Angelo, to the unwelcome questions of a security guard, and we all feel her discomfort, at once weary and alarmed. “I am married,” says Denise Chan, waving her ring at her girlfriends with heart-breaking hollow triumph.

The all-female, all-Asian company is at once culturally specific and gloriously inclusive. The intimate setting of the KXT stage makes for loud cackles of recognition at family dynamics, and shrieks of embarrassment as an Asian schoolgirl co-opts an onlooker to be her crush. The stories flash by, lurching from reminiscence to confession to all out fantasy, including a spectacular episode on the dangerous influence of The Sound of Music.

The play ends with a somewhat unconvincing affirmation of selfhood for the three nameless Fat Virgins. The real triumph goes to the actors who have sung, danced and played to rise up and out of their culture-bound characters.

TV, movies, Find out the next TV, streaming series and movies to add to your must-sees. Get The Watchlist delivered every Thursday.

Was Blue Bloods' Linda Murdered? Show Boss Weighs In on That Dark Hint

Feast your eyes on Britain’s biggest sausage roll — at 1.5ft long and weighing 3lbs – The Sun

The Holidate scene that has viewers doing a double take