A thrifty homeowner has revealed she gave her tired kitchen a modern makeover – using bargain buys from Wilko and The Range.

Jamie Curtis, from the UK, shared impressive before and after photos to Facebook group Extreme Budget DIY & Life Hacks.

She penned: ‘And it is finished! So pleased with how it looks now. £2.99 wallpaper on clearance at the range, furniture paint from Wilkos and two rolls of Fablon for the counter tops.’

And many were quick to take to the comments section full of praise for Jamie’s handiwork.

‘Great work! I’m on a tight budget so v helpful,’ enthused one, while a second commented: ‘I love this, why get a brand new kitchen, when you can achieve this.’ 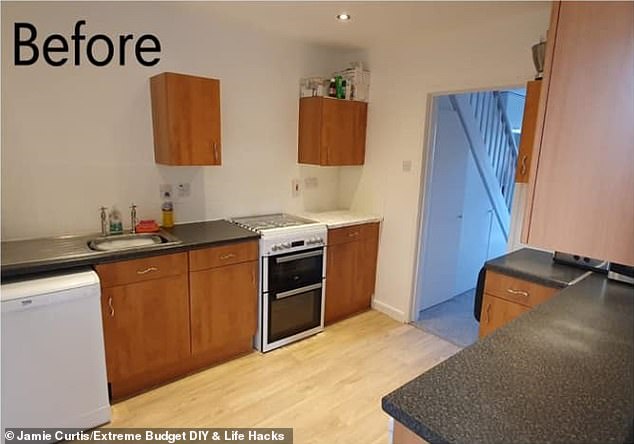 Jamie Curtis, from the UK, shared impressive before and after photos to Facebook group Extreme Budget DIY & Life Hacks. Pictured, the oak cupboards and plain walls before the makeover 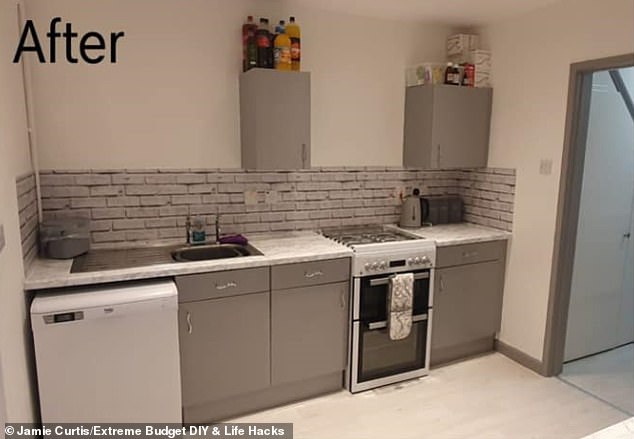 Jamie took to the Facebook group and penned: ‘So pleased with how it looks now’ (pictured)

A third added: ‘Love it. So much more modern,’ while a fourth agreed: ‘Oh, I like how the colour goes along the skirting boards and door frame too. Nice.’

In the before photo, the kitchen looks in desperate need of a modern makeover and features oak wood cabinets and granite surfaces.

But the after snap shows the cupboards are now a stylish grey, the surfaces are trendy marble and the splash back boasts a brick design.

And while Jamie did the stunning renovation on the cheap, she did admit the floor was ‘an expense.’

When one asked what she did to the floor to lighten it, the savvy homeowner explained: ‘Unfortunately that was an expense. I bought new flooring but apart from that everything else was a bargain.’

However, it didn’t stop DIY fans from across the nation commending Jamie for her impressive efforts – with many taking inspiration from her bargain transformation.

‘Love it. So much more modern,’ wrote one, while a second commented: ‘Love the new kitchen.’

‘I zoomed in to look at your worktop and then I realised it’s nearly exact same as mine. Right down to the handles on your cupboards.’

The comments section was inundated with praise from DIY fans, with one writing: ‘I love this. Why get a brand new kitchen, when you can achieve this?’

‘The Young And The Restless’ Spoilers For Tuesday, August 28: Billy And Phyllis Shock Jack!

Gemma Collins admits she LIED about making a sex tape