A DIY enthusiast has shown how she transformed her old bathroom into a boutique space for only £100.

Nursing school worker Karen Joy Grey, 54, from the Isle of Wight, painted the old yellow tiles of her bathroom a sleek matt black and invested in new bath panels and an iPad holder in order to update the room.

She told Femail she also invested in decorative items to complete the overall look of the bathroom, which had been a labour of love she completed on top of being a frontline worker during the pandemic.

She shared before and after pictures of her project on the DIY On a Budget Facebook group, racking up hundreds of likes and comments. 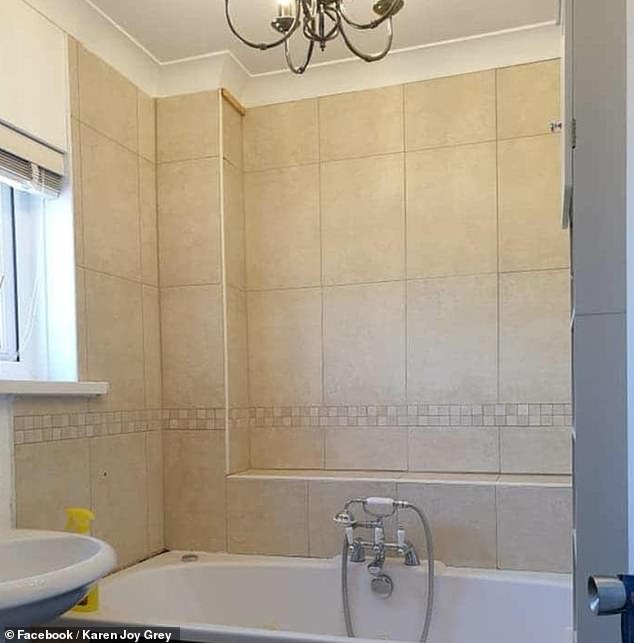 A DIY whizz showed how she transformed her old bathroom into one that wouldn’t look out of place in a boutique hotel for only £100. UK-based Karen Joy Grey painted the old yellow tiles and invested in a few pieces in order to update it (pictured before) 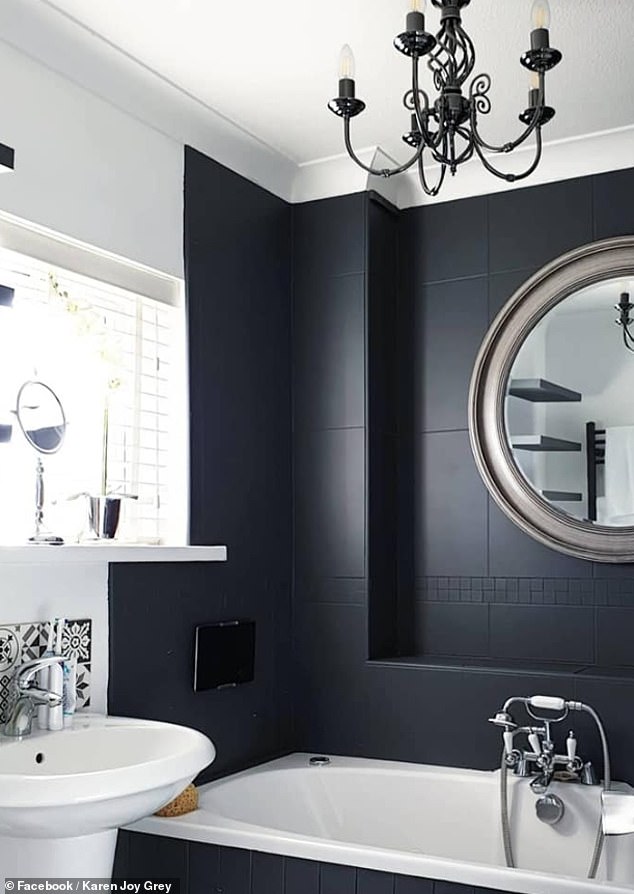 Karen Joy painted her yellow tiles a striking black, added a stencil design above the sink and replaced her bath panel in order to achieve the smart new look (after)

The proud DIY enthusiast said the bathroom overhaul only cost her £100. She was so pleased with the results which she said inspired her to redo her fitted wardrobe

Proud Karen first shared a picture of the bathroom as it looked before the makeover.

Its tiles were yellow and white, while the walls looked in need of a lick of paint.

Karen explained she wanted to create a ‘sanctuary’ in the busy home she shares with her family of eight.

She was as inspired to complete the makeover by joining DIY communities on Facebook.

‘I had already painted the front door using the paint from Frenchic,’ Karen said. 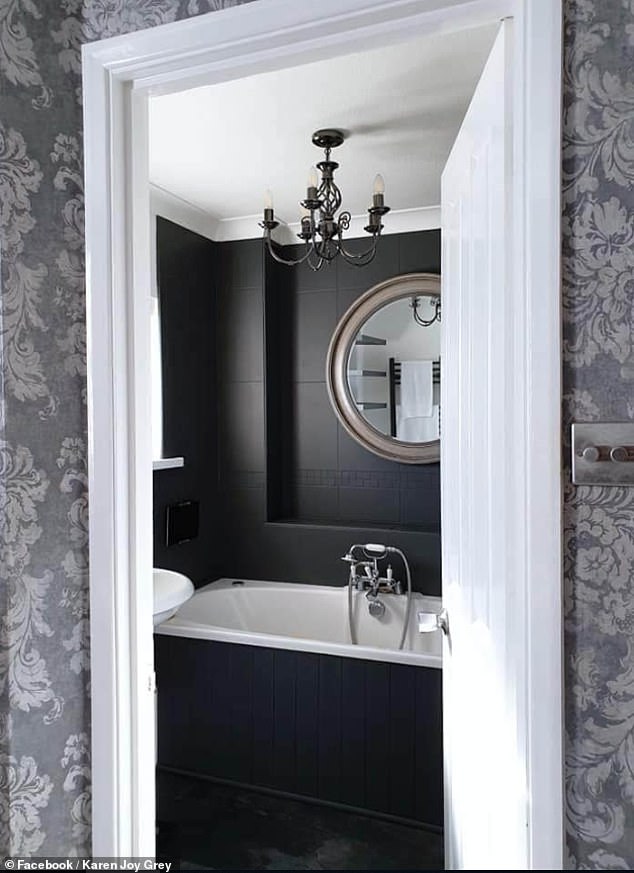 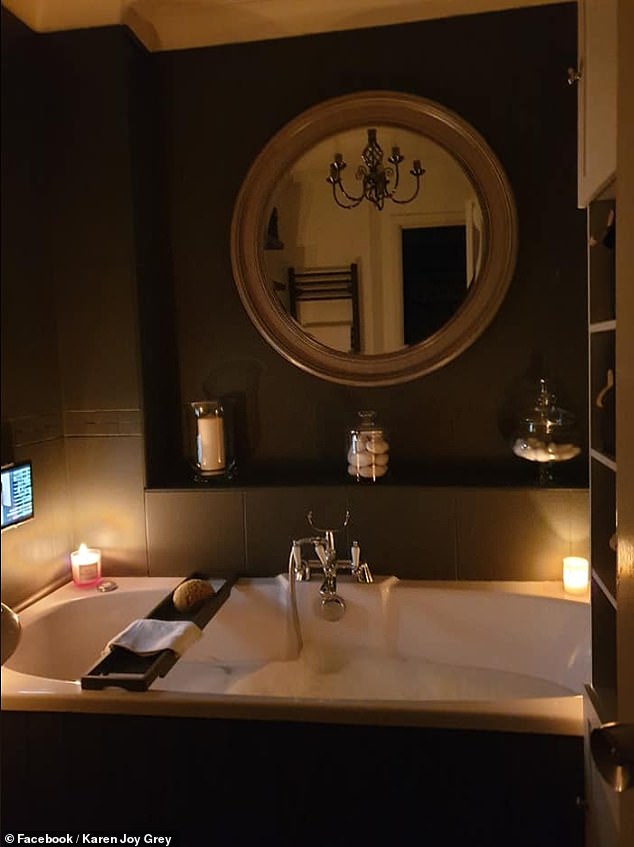 Karen shared a picture of the candlelit bathroom, complete with a bubble bath, a chic mirror and an iPad in order to convey its new atmosphere

‘I joined a Facebook group about it to learn how to paint my door, it was much easier than I thought and it transformed my front door… then my garage… and I saw people painting kitchens and all sorts.

‘My en suite was so grim I thought why not? Can’t make it look worse! My husband is so good, he lets me get on with my mad schemes and then helps me when I ask.

‘I already had the shelves, but took them down and painted them after I painted the tiles.’

The nifty mum mixed things up by using chic black paint, which she applied to the wall against the bathtub.

She kept the bathroom’s ceiling white, as well as the wall where the sink is located.

Karen added she invested in a new bath panel, which is also painted in black to match her tiles. 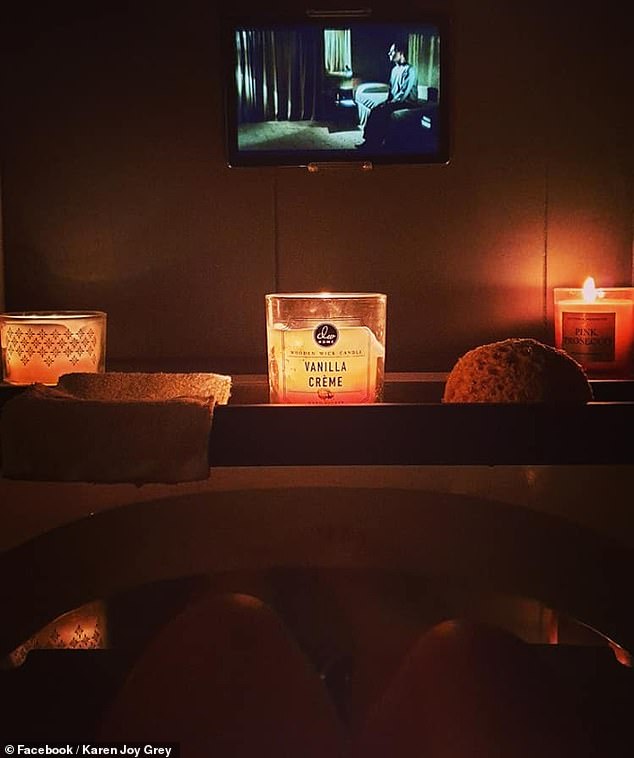 Karen shared a picture of herself in the bath, with only her knees showing, to show what it looked like from inside the bathroom

She also used some some leftover laminated flooring she had from her conservatory in order to redo the floor, also in black.

‘The flooring was in the garage left over from a previous makeover, the conservatory to dining room, it is from B&Q – choice is limited on the Isle of Wight – and is designed for kitchens and bathrooms because of the animals and children,’ Karen explained.

She then added some decorations to match her new setting, propping an iPad holder against one of the walls so she could watch her favourite shows while taking a dip.

‘The mosaic tile above the sink is a single tile from B&Q that cost less than £5,’ she explained.

‘The mirror was from the range and the frame was damaged so we got 10 per cent off and I repaired it with some old eye shadow,’ she added. 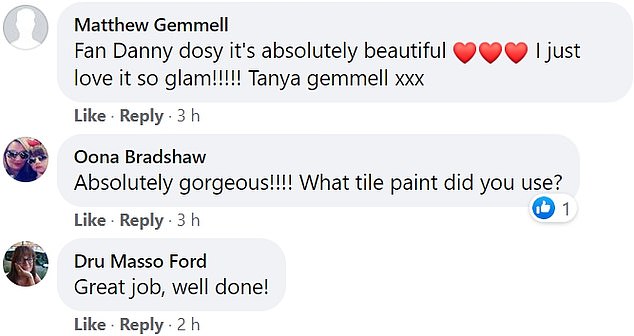 Baskets for storage on the shelves from eBay.

Finally, she invested in a large golden round mirror, which she hung above the bath.

In subsequent pictures, she had added a bath tray and some towels to the bathroom, which was candlelit, in order to document its new atmosphere.

In one last picture, Karen shared a cheeky picture of herself using the bath, watching a show on the iPad, glass of wine in hand, with just her knees visible.

Fellow DIY-enthusiasts were deeply impressed with the budget-friendly makeover.

‘It’s absolutely beautiful I just love it so glam,’ one said.

‘Amazing, well done looks like a hotel bathroom,’ one gushed, while another fan commented: ‘That’s my kind of thing. Love it.’