What it’s really like to put your pet in the hold: TikTok video showing how animals are transported in crates in airplane luggage holds goes viral – with viewers branding it ‘terrifying’

Animal lovers have slammed a video showing the ‘terrifying’ way pets are transported on airplanes.

A baggage handler Vancouver International Airport, known as Deeej, shared a TikTok video showing a dog in a carry crate on one side of the luggage hold beneath the commercial aircraft, with the suitcases on the other side.

The dog’s crate was sheltered behind a fabric partition screen and attached to the side of the hold by straps. 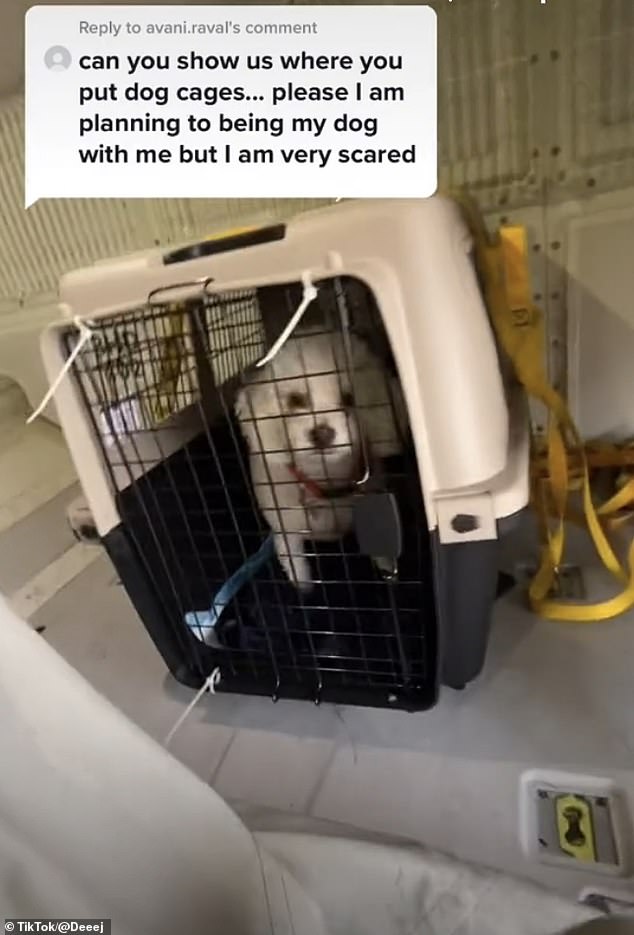 The video showed how dogs are transported on planes, with them kept in crates, which are strapped to the floor of the hold 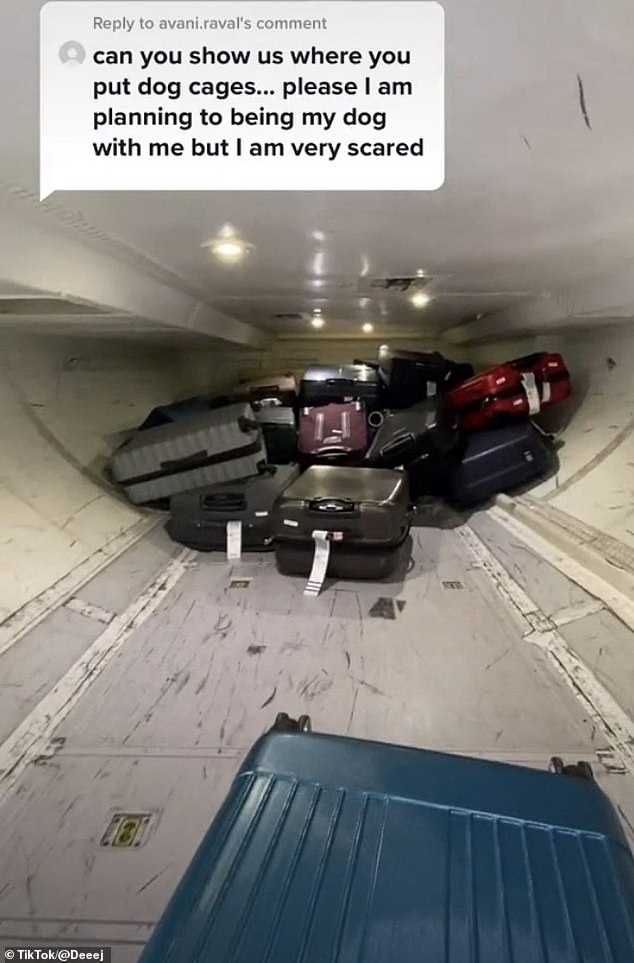 The TikTok video, which has garnered more than 7 million views, was created by an airport worker. They showed the hold of the plane containing suitcases and a dog

Deeej, who is known for sharing behind-the-scenes clips of his work at the airport, posted the video on TikTok in response to a follower who wanted to know how pets are transported.

The clip, which has racked up more than 7 million views, has been branded ‘terrifying’ by some viewers.

For the majority of commentators, seeing the way animals are treated on aeroplanes was upsetting, with one describing the process as ‘terrifying’

Is it safe for dogs to fly in the cargo?

According to the RSPCA: ‘Long journeys including the flight, transportation to and from the aircraft and waiting times in the hold of an aircraft can be very stressful and distressing for pets.’

‘Although the hold is usually ventilated and temperature controlled, this may not be the case when the aircraft is on the ground.

‘Delays can occur in flight times and regulations may not allow the hold to be opened on the tarmac, even during high temperatures. You should take all this into consideration when deciding to use this method of transport.’

The charity advises people to contact the airline prior to arranging travel to find out what its ‘pet travel’ policy is.

‘By law the International Air Transport Association Live Animals Regulations must be met in order to transport animals by plane,’ it adds.

‘These specify standards such as the design, ventilation, and size of containers for transporting dogs and cats, and also arrangements for providing food and water. They also state that particular animals are not allowed to travel by plane.’

One commenter wrote: ‘No way in hell I would ever put my dog, who is a family member, in this situation.’

Another wrote: ‘I could never do this to my dog. I’d be crying and throwing up the entire plane ride knowing how lonely and scared he is.’

A third said: ‘This gives me such anxiety just thinking about how scared the dog feels.’

However the video was supported by other airport workers, who explained pets were treated with the utmost care when travelling.

Other TikTok users agreed, saying this was a typical way for pets to be transported.

One posted: ‘The animals are safe and fine. The cabin is pressurised and perfectly safe. One of our animal services staff can confirm.’

Another wrote: ‘People just want to make up excuses to get offended. The people who pack the luggage take good care of the pets.’

A third added: ‘Most people commenting are extremely close minded. Some people have to travel with their pets as they are unable to leave them.’

Some airlines will allow your pet in the cabin with you – depending on their size.

However, some only make this allowance for assistance dogs, meaning many canines will be obliged to travel in the hold.

Airline Transportation Association say that more than 5,000 animals are killed, injured, or lost on commercial flights each year.’

According to the RSPCA: ‘Long journeys including the flight, transportation to and from the aircraft and waiting times in the hold of an aircraft can be very stressful and distressing for pets.’

Princess Diana: 7 Photos of Her Spending Easter With Prince William and Prince Harry