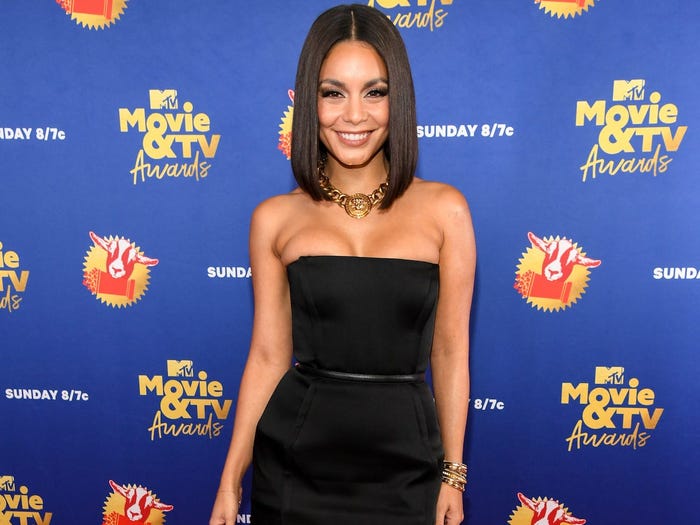 The actress first walked the event's red carpet in a black minidress from Versace. The garment was strapless with a thin belt around her waist, and perfectly matched her Casadei pumps. Hudgens also wore a sleek hairstyle, Versace choker, and David Yurman jewels.

The outfit, as well as others Hudgens wore throughout the night, was styled by Jason Bolden.

Her next outfit was even more glamorous. Hudgens appeared onstage at the start of the show in a silk Tony Ward gown. The halter dress had a jewel-encrusted neckline, thin cutouts across the waist, and a mermaid-style skirt.

Hudgens completed the look with peach makeup that complemented the coral color of her dress and matching long gloves.

Still, Hudgens found a way to incorporate a more comfortable look into the awards ceremony. During a skit featuring a goat, she wore an orange yoga ensemble that consisted of a sports bra and leggings.

MTV shared a clip of her wearing the athleisure outfit on Twitter.

She also embraced a classic movie with her fashion. To present Jamie Lee Curtis with the night's Scream Queen award, Hudgens wore a white sleeveless dress and a Versace necklace.

Both Hudgens and her dress, however, were quickly covered in fake blood as a nod to the horror film "Carrie."

Afterwards, Hudgens changed into yet another black gown. This one, designed by Christopher Kane, had a sleeveless top made from latex with two triangular cutouts across her waist. The latex extended partially onto her shiny skirt, which reached her ankles.

To close out the show, Hudgens wore her most casual look of the night: blue jeans and a red crop top. She completed the look with a red bomber jacket made from leather, gold bracelets, and black Converse sneakers.

Google cloud gaming service to launch in 14 countries this year