Avenue 5 (Fox Showcase from Tuesday, January 21 at 8.30pm) is a new comedy from Armando Ianucci, and really, I could just stop there. If you like his work, there’s a very good chance you will like this.

If you don’t immediately recognise the name, here are a few things to get you started: The Thick of It. In The Loop. Veep. The Death of Stalin. The Scottish writer-director-producer has serious form. 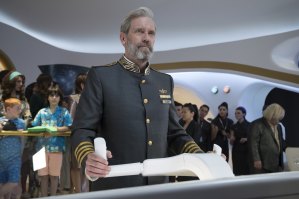 Hugh Laurie plays the captain of a luxury space cruise ship in the sci-fi spoof Avenue 5 on Foxtel.Credit:Fox Showcase

Avenue 5 is set on a luxury cruiser in space. I’m not sure if the special effects are meant to be cheesy – the four episodes (of eight) I have seen were still waiting on final VFX – but they are part of the reason it reminds me so much of the wonderful Space 1999, made by Gerry and Sylvia Anderson of Thunderbirds fame from 1975 to 1977.

I suspect it’s a deliberate echo, because in that series, a colony of lunar settlers faces disaster when an explosion pushes the moon out of its orbit. In Avenue 5, a freak accident throws the eponymous cruise ship out of its intended 55-day orbit of the solar system. Now its 5000 passengers and crew must wait at least three years to get back home.

Luckily, they have the rock-steady captain Ryan Clark (Hugh Laurie) to guide them. He’s a man so dependable that the squajillionaire owner of Judd Enterprises, Herman Judd (Josh Gad), declares that if ever he needed a double hand transplant he knows who would be left with stumps.

It’s meant as a compliment, but Judd is such a narcissistic airhead that everything he says is filtered through a lens of solipsistic self-interest and ignorance. You might wonder how such an infantile idiot could become one of the wealthiest, most powerful people on Earth, but, well, America.

Plagued by a 26-second delay in a video hook-up with the space agency on Earth, Judd asks his marvellously unemotive 2-IC Iris (Suzy Nakamura), “What is NASA saying? Are NASA saying? Is it is or are?”

“What is they saying?”

Judd gets most of the overtly ridiculous lines, but Zach Woods as head of customer relations Matt Spencer comes a close second. He doesn’t really like people. He utters words that seem soothing yet are not. His face pops up on video billboards around the ship advertising onboard services. “Do you like to drink,” he asks in one, meant to entice punters to the bar. “My dad certainly did.” Ouch.

But it’s Laurie’s character that inevitably holds the centre. Not that his own centre holds.

When a passenger asks if he’ll be doing karaoke later, he replies he sings only when drunk – so ask him again after 5. When he’s confronted with the scale of the disaster that has befallen his ship, his accent suddenly changes from American to English as he freaks out. He does his best to soothe the passengers, but privately admits he has no idea what to do.

Clark, you see, is no captain at all. He’s merely an actor – an alcoholic English actor at that – hired to play the part, while the ship largely steers itself.

“Ryan betrayed me,” says Judd, who is, of course, entirely responsible for the situation, “like a character in a Shakespeare movie”.

Avenue 5 is a sitcom structured as a drama. There’s a through narrative: will Clark, ably assisted by the whipsmart and under-appreciated second engineer Billie (Lenora Crichlow), be able to rise to the occasion and actually save the ship. But there are also characters who can be relied upon to behave in the way we know they will, to deliver the laugh lines we demand, in true sitcom fashion.

It's classic Ianucci, skewering incompetent leaders and finding a way to laugh in the face of impending disaster. It might just be the perfect show for our times.