The president of the Victorian Bar has slammed the Andrews government’s new pandemic legislation as “appalling” and revealed the government “grossly misrepresented” its consultation with the barristers’ peak body.

Christopher Blanden, QC, said the new laws, designed to replace sweeping state of emergency powers, would give the Premier unprecedented power with little to no checks and balances. 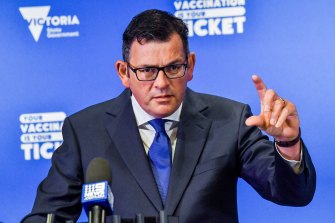 Premier Daniel Andrews will have sweeping powers to declare pandemics under laws introduced to Parliament this week. Credit:Joe Armao

“Stasi police would have been more than happy with the range of powers if they were given it,” Mr Blanden told The Age. “It’s extraordinary.”

On Tuesday, the Victorian government tabled the Public Health and Wellbeing Amendment (Pandemic Management) Bill 2021 in Parliament. It is expected to pass the lower house, where Labor commands a majority, on Wednesday.

It will be debated in the upper house on Thursday. The government needs the support of three crossbench MPs to pass legislation.

The new laws will curtail the chief health officer’s powers, giving the premier authority to declare a pandemic and the health minister the role of making public health orders.

A summary of the bill that was accidentally circulated to opposition and crossbench MPs on Monday evening contained an admission that “because of the short time frame and the complexity involved in developing this bill, consultation has not been as extensive as it would normally be”. It said 30 external stakeholders were consulted in June and July.

However, Mr Blanden has characterised the consultation process as a “gross misrepresentation” of what transpired earlier this year.

“The total extent of our consultation – in inverted commas – consisted of participating in a 45-minute Microsoft Teams meeting back in June and the only issue raised was whether the chief health officer should retain the power to declare a pandemic,” he said.

“We’ve never seen a bill, we’ve never been asked to comment or anything. Ordinarily, as happens in relation to other pieces of legislation, we’re shown the draft bill some weeks before it goes to Parliament and asked to give our comment.”

The Victorian government invited the Victorian Bar to another consultation session, scheduled for September 28, but cancelled at short notice, according to Mr Blanden.

“I’m very disappointed and cross because people have a right to expect the bar to comment on matters of legal importance,” he said.

“When you look at this bill, there are elements of it that [are] fundamental to the lives of Victorians … and some of them are appalling.

“This is a bill that fundamentally interferes with the rights of citizens in some very basic ways. It abrogates the privilege against self-incrimination and you’ve got detention at the whim of the minister. It’s just appalling stuff.”

Under the new laws, the premier will need to table a report in both houses of the Victorian Parliament setting out the reasons for declaring a pandemic, while the health minister and chief health officer will need to make their advice public.

An independent committee made up of health, legal and community group experts will scrutinise decisions, but their advice and objections will not be binding.

A pandemic can initially be declared for four weeks. Once that declaration is renewed, it can be repeated at three-month intervals thereafter until the disease no longer presents a risk to the community.

Police will be able to access QR-code check-in data as the state reopens only if there is an imminent threat to someone’s life and they acquire a Supreme Court order, and the right to privacy will be enshrined in law.

Mr Blanden said the government’s proposed legislation did not have the appropriate checks and balances because if the premier, minister or chief health officer did not table their reports in Parliament, it would not affect the validity of their decision.

He called for changes to the bill to give Parliament the ability to vote on whether a pandemic declaration should be extended, and disputed that it would lead to the politicisation of a public health disaster.

“Once a declaration is made, the health minister is given the extraordinary power to make an order necessary to protect public health, including the power to order detention, restriction of movement …. They can be enforced and punishable if you breach them by imprisonment for an unspecified period of time, effectively at the whim of the minister,” Mr Blanden said.

“And then they’ve got this bizarre system where the only way you can challenge that is by making an application for review to someone called a detention review officer … not to the courts.” 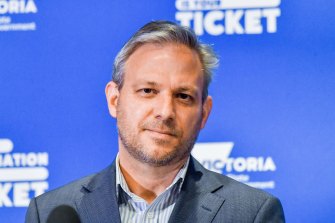 Greens leader Samantha Ratnam, who was involved in negotiations for the bill, said the new legislation was “better and fairer” than the current arrangements.

“There were a number of improvements we secured including the privacy protection for data, the COVID fines system being review, oversight, accountability and transparency,” Ms Ratnam said on Tuesday. “We’re looking through the details of the bill now. We’re pleased with the improvements that this bill includes.”

Get a daily update on the climate summit that will shape our future. Sign up to our Clear Air newsletter here.

Meet Ruth Bader Ginsburg's Personal Trainer, Who She Called 'The Most Important Person' in Her Life