South Dakota House lawmakers on Tuesday began impeachment proceedings against the state’s attorney general, who is facing misdemeanor charges for striking and killing a man with his car and is already under pressure to resign. A bipartisan group of lawmakers filed a resolution in the House to impeach the state’s top law enforcement officer, Jason Ravnsborg, after he indicated he would not heed calls for his resignation. 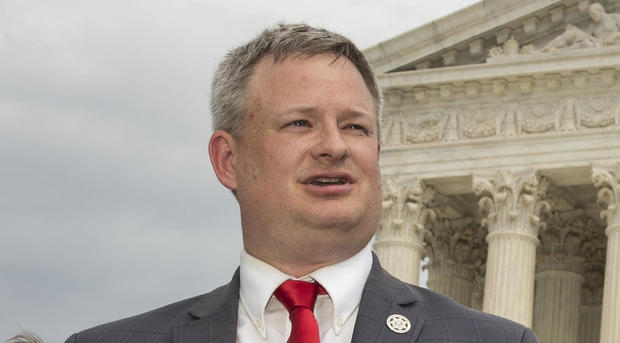 The Republican attorney general faces three misdemeanor charges  but no felonies in the September death of 55-year-old Joseph Boever.

Gov. Kristi Noem released videos of Ravnsborg’s two interviews with law enforcement late Tuesday. In the videos, investigators confront the attorney general with the gruesome details of the crash, at one point telling him, “His face was in your windshield, Jason, think about that.”

Ravnsborg appeared unsure of many details in the crash, but investigators told him Boever’s glasses had been found in the attorney general’s Ford Taurus and bone scrapings were found on the highway shoulder. As investigators described how his car swerved onto the shoulder and struck Boever, causing major damage to the car hood and windshield, Ravnsborg appears distressed.

CBS affiliate KELO-TV reports that during the first interview, Ravnsborg told investigators that he thought he may have hit a deer.

“I’m thinking it’s a deer at this point, but I had, I did not see anything. I didn’t have a time to swerve or accelerate or decelerate or anything,” Ravnsborg said. “I didn’t see anything.”

KELO reports that when investigators arrived at the crash scene the next day, they say they found a working flashlight next to Boever’s body which was still on. They told Ravnsborg the light was shining just inches from the road, and they didn’t know how he could have missed it. Ravnsborg repeatedly told investigators he was driving on the road, not the shoulder, and that he didn’t know that he’d hit a man until the next day.

Lawmakers argued in the impeachment resolution that Ravnsborg should be removed from office for “his crimes or misdemeanors in office causing the death” of Boever.

The resolution also stated that Ravnsborg’s conduct following the crash was “unbecoming” and his “statements and actions failed to meet the standard” of his office.

“When we started looking through and thinking about the duties that the attorney general owes to the people of South Dakota, and I think he owes a special duty to protect the people and uphold the laws. And I think that the actions in these incidents fell short of that duty,” said Rep. Will Mortensen, who represents the area where the crash occurred and who sponsored the impeachment resolution.

“Now that the investigation has closed and charges have been filed, I believe the Attorney General should resign,” Noem said in a statement.

But Ravnsborg’s will not be stepping down, according to spokesman Mike Deaver.

“As an attorney and a Lt. Colonel in the Army Reserves, AG Ravnsborg has fought for the rule of law and personal liberties and would hope that he is afforded the same right and courtesy,” Deaver said in a statement.

While Ravnsborg has not been convicted of any crimes, Mortensen said he felt it was the “right time” to begin impeachment after looking through the publicly available evidence and prosecutors announced their charging decision.

It would take a simple majority in the House to advance the impeachment charges to the Senate. There, it would require two-thirds of senators to convict and remove him from office. State law requires senators to wait 20 days from when the attorney general receives a copy of the impeachment charges before beginning the trial. Noem would get to appoint a replacement if Ravnsborg leaves or is removed from office.

The attorney general, who was elected to his first term in 2018, was driving home to Pierre from a Republican fundraiser late on Sept. 12 when he struck and killed Boever, who was walking on the shoulder of the highway. Ravnsborg initially told authorities that he thought he had struck a deer or another large animal and said he searched the unlit area with a cellphone flashlight. He said he didn’t realize he had killed a man until the next day when he returned to the accident scene.

After an investigation that stretched over five months, prosecutors said they still had questions about the crash but were unable to file more serious criminal charges against Ravnsborg. They charged him with careless driving, driving out of his lane and operating a motor vehicle while on his phone.

Prosecutors found he was not using his phone at the time of the crash, but had been using it while driving about one minute before. The attorney general could face up to 30 days in jail and up to a $500 fine on each charge, if convicted.

Michael Moore, the Beadle County State’s Attorney who is assisting in the case, said Monday that when Ravnsborg was interviewed by law enforcement following the crash, he was not clear about what had caused him to swerve on to the shoulder of the highway and gave “varying examples of possibly what could have happened.”