To use such racy language in front of so respectable an audience was quite a prospect. Top-shelf stuff.

Come the moment, Sir Vince proved unequal to the task. Out it popped, and flopped. Brexit, he declared, was ‘an exotic sprezm’. 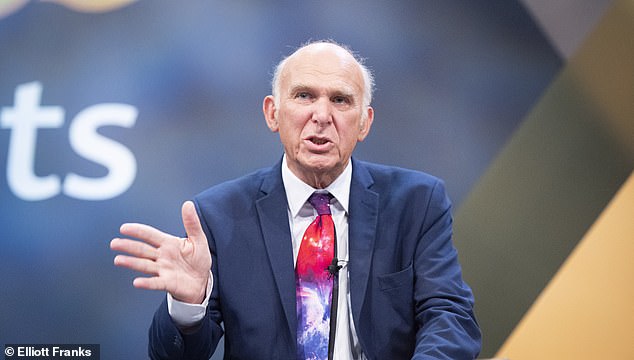 In the Brighton conference hall, mouths dropped open in gummy puzzlement. One or two punters fiddled with hearing aids.

Others looked askance at the loudspeakers, wondering if some fluff had got into the electrical gubbins.

Sprezm? Has Sir Vince just sneezed? Sprezm? A border town between Croatia and Montenegro, perhaps? Sprezm? A new brand of detergent for dentures: Spearmint Sprezm, to give your gnashers that tingly feeling.

If there was a smacking sound after Sir Vince had uttered this immortal goof, that will have been his spin doctor whacking his brow against the nearest concrete pillar. Repeatedly. And hard. 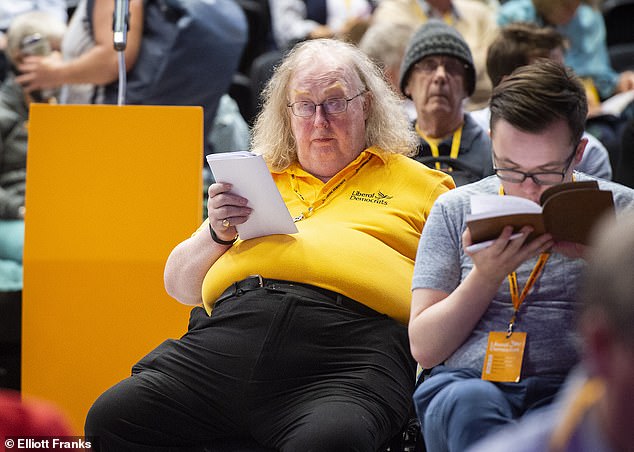 Liberal Britain: Liberal Democrat supporters gather for their conference in Brighton. Attendees looked askance at the loudspeakers, wondering if some fluff had got into the electrical gubbins

Instead the old donkey head- wobbler – the silly old fool, the clot! – had uttered a phrase like a man asking for a jug of water after taking too incautious a bite of vindaloo’d goat. Imagine a circus trapeze artist miss his big connection and go sailing out of the tent, screaming ‘nooooo!’

Sir Vince had intended his soundbite to make people laugh at Brexit. Instead the laughter was at his expense.

The speech was generally low-key, discursive rather than dramatic, delivered with a sense of calm, or perhaps glumness.

Yet in places it was markedly more acidic than one might expect from a politician who claims to disapprove of ad hominem attacks. He slipped in barbs about Boris Johnson’s marriage and about his weight, furthermore calling him ‘rabid’.

He again referred to the gentlemanly Jacob Rees-Mogg as ‘nasty’. He called on Labour to dump Jeremy Corbyn as leader, and said many of those around Mr Corbyn were ‘until recently on the Stalinist wing of the microscopic British Communist Party’.

He accused the referendum campaign’s Leavers of racial prejudice. There was more negativity in this speech than there was positivism. Yet Lib Dem activists are a pretty tolerant lot. An hour or so earlier, sinking a crafty pint at the Hop Poles pub just round the corner from the conference hall, I met some charming trans rights campaigners. They said they did not intend to listen to Sir Vince’s speech. ‘Why should we listen to a politician telling us what to think?’

In his low-energy oration, Sir Vince accused Labour and the Tories of becoming ‘intolerant cults’ and praised the work of Lib Dem councils which just ‘got on’ with their duties with ‘no ideological dogma’. 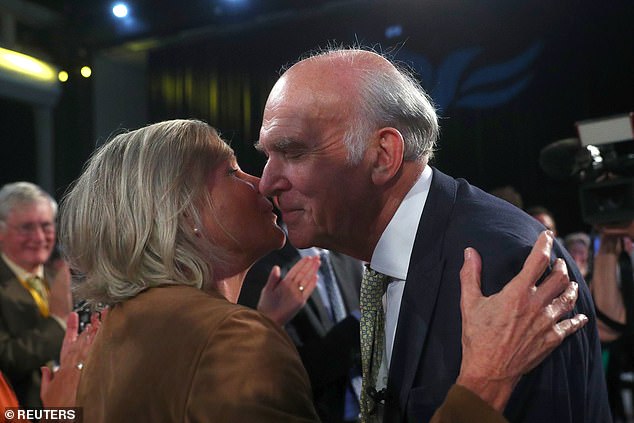 Sir Vince, right, pictured with his wife Rachel at the Liberal Democrat conference yesterday. If his hunched shoulders and his permanently morose cast of face are much guide, leading the Lib Dems is not much fun

Yet his speech yesterday was full of dogma about the EU (very much pro), grammar schools (very much against), housing firms (anti) and tax (oh yes, he likes that).

It was the speech of a Social Democrat, not a Liberal, a top-down, do-as-I-say type, not a live-and- let-liver.

He also said that many Britons have ‘crap jobs’. Perhaps he would include himself in their number.

If his hunched shoulders and his permanently morose cast of face are much guide, leading the Lib Dems is not much fun

They creaked to their feet at the end. They clapped, as any audience of political delegates will clap their nominal leader. But there was no instant adoration. They were ungalvanised.

For all the talk about a second referendum, and how Sir Vince would lead us back to Brussels, they did not seem in his thrall.

But at least the exotic sprezm had given us all a laugh.

‘Independence is our greatest strength’: The impact of your support for The Age in 2020