Workers can expect stronger wage growth over the next two years as the federal government looks to drive unemployment to near 50-year lows, with economists predicting even a surge of skilled migrants won’t cool the jobs market.

Prime Minister Scott Morrison has set a goal to push the jobless rate towards 3 per cent as the economy recovers from the coronavirus pandemic. 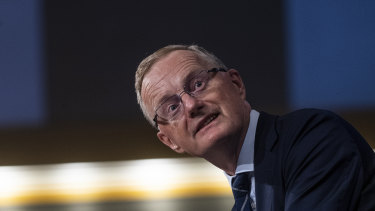 With inflation rising faster than expected and unemployment falling to a 13-year low of 4.2 per cent in December, the Reserve Bank has forecast wages growth to pick up as demand for workers increases.

Wages growth hit record lows during the coronavirus pandemic before ticking up 0.6 per cent in the September quarter, or 2.2 per cent over the year.

However, Australian Council of Trade Unions secretary Sally McManus said unemployment was low due to the closure of the international border rather than the federal government’s economic management.

“As soon as the election is over they will rush to return to huge levels of wage theft and exploitation of visa workers,” Ms McManus tweeted.

In an address at the National Press Club on Wednesday, Dr Lowe said the main driver of the low unemployment rate was not closed borders but high levels of fiscal stimulus and monetary policy support.

“That’s a very powerful combination. One that we haven’t seen for a long time,” he said. “That’s what’s driven the unemployment rate down and, in time, wages up.”

He said this had been the case in the United States and Europe where high levels of stimulus were resulting in low joblessness.

He said letting skilled workers into the country was critical, with businesses indicating they were delaying investment or unable to expand as they could not get people with the skills they needed.

“If you look at momentum in the labour market, we could easily get there [below 4 per cent unemployment] in the next couple of months,” Mr Aird said.

CBA modelling of internal data on wages and salaries deposited into clients’ accounts indicates wage growth accelerated by about 0.8 per cent over the last quarter of 2021, taking the annual rate to 2.5 per cent. In November, the RBA estimated wages would end the year up 2.25 per cent.

“In terms of international migration impacting the supply of workers … I think it’ll take time for the stock of overseas workers to build up,” he said.

“Every industry right now in Australia has an above-average level of job vacancies, it’s right across the country, across all skill levels. That dynamic won’t change overnight because more foreign workers are arriving.”

The Australian Retailers’ Association used its pre-budget submission to call on the federal government to retain changes made to working holiday and overseas student visas, which removed the cap of 40 hours a fortnight of work for students and doubled the old limit of six months with one employer.

Deloitte Access Economics partner Chris Richardson said some long-term features had left wages growth more sluggish than in the past and behind other nations, including multi-year workplace agreements.

“It is important to remember that over the longer term, wages rise for a reason, and it might be as simple as better educated workers … better equipment to work with, technological breakthroughs,” he said.

“[Low wage growth is] not as simple as [businesses] ripping them off. The profit share is growing for lots of reasons, one is industry concentration and the other is resources have done better than they used to.”

Young people are getting more and more addicted to phones, researchers warn