Our brains are hard-wired to do this stuff: to fill in the missing number, letter or word; to complete a sentence or extrapolate the meaning of a look. So when we see a life-size, artificial horse clearly being manipulated by three puppeteers, we'll expunge the human hands and legs from what we see, and fill in the flesh, hair, teeth, muscles and even the heart – not because the other actors treat it like a horse, but because it is one. 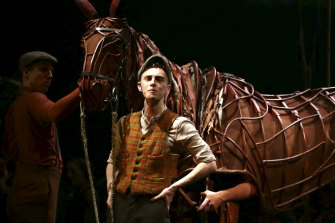 War Horse – The story of a horse and his boy who survive the horror and inhumanity of World War I.Credit:Andrew Tauber

That's the wonder of National Theatre of Great Britain's War Horse, which first opened in 2007, and now returns to Sydney for a second season. That stupendous success is not so much due to the script or actors, as to this non-speaking star of a narrative drama, Joey the horse, created by the brilliant Adrian Kohler and Basil Jones of Handspring Puppet Company.

The magic they wrought, the reason puppets have existed for about 4000 years, is that our minds fall in love with what our imaginations have created. In fact, and this is the play's problem, the humans seem pedestrian by comparison. While Joey and the other horses fire our minds into a frenzy of synaptic activity, the actors are just ordinary creatures who are obliged to marginally overact and marginally overemote in a theatre that's too big for the subtle nuances of human facial and verbal communication. 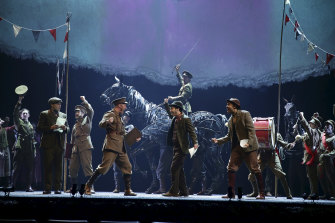 War Horse starts in 1912 when Joey is bought as young colt for Albert (Scott Miller). Two years later he is sold as a full-grown horse to the British Army by Albert's father (William Ilkley) and shipped to the Western Front. Most of the story concerns the wartime trials and tribulations of Joey and of Albert's desperation to find him.

Amid endless ingenuity in Joey's creation, three aspects forge the bond we feel: his breathing and sounds, his life-expressing (yet unmoving) eyes, and his flickering, twitching, nervous, eager ears. Then there's the puppeteers' artfulness in conveying the animal's weight. When one horse dies and the puppeteers emerge from within, it seems the soul is leaving the body.

Without the horses this would be an engaging anti-war story (based on Michael Mopurgo's eponymous book) with both epic and soppy elements. With the horses it must be seen to be believed.