CHOCOLATE fans are being warned about a Cadbury scam on Facebook offering a "free" hamper.

The Facebook post claims Cadbury is giving away the treats to celebrate its 126th birthday, but it's fake and could actually steal your bank details. 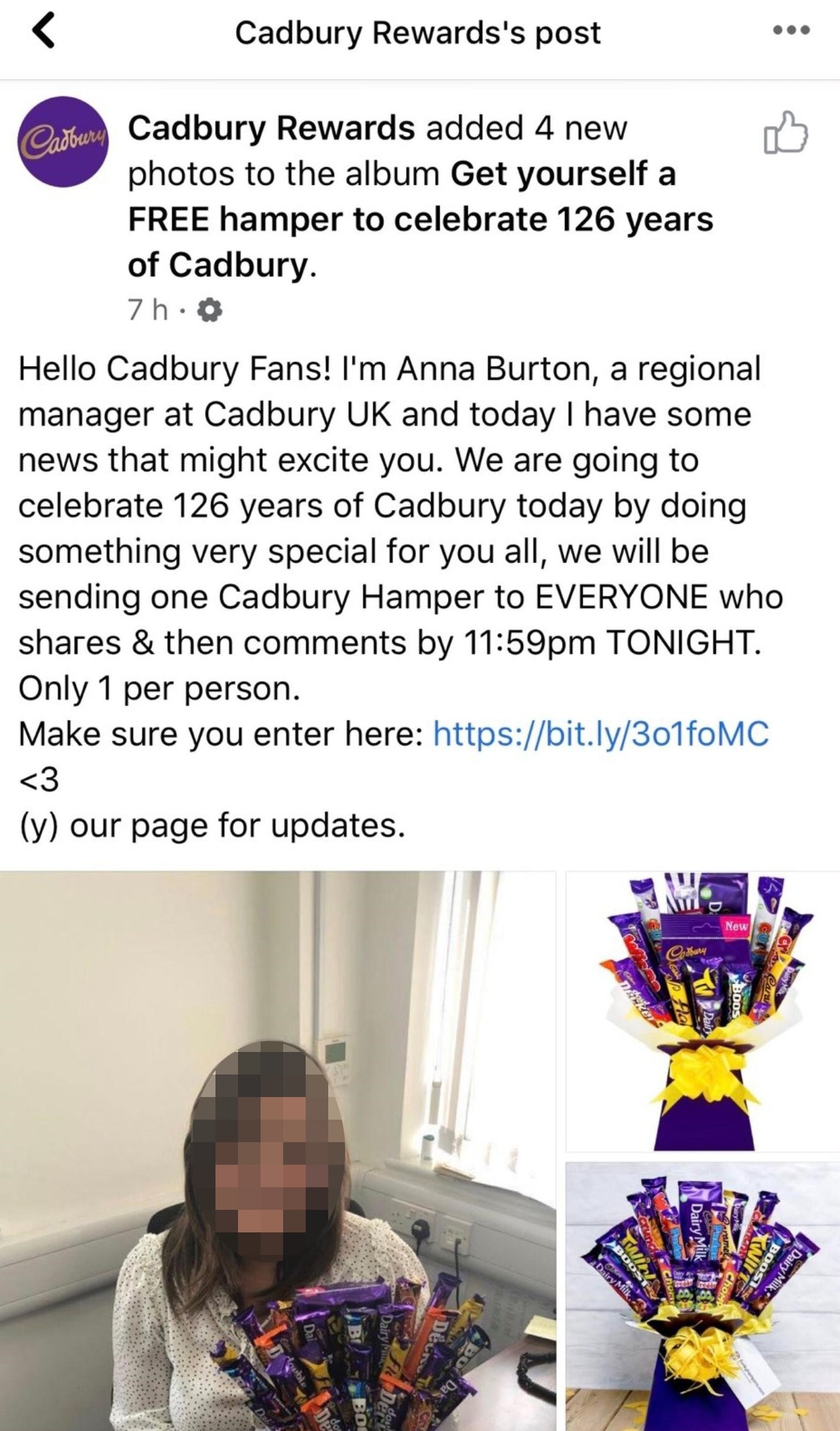 Researchers at think tank Parliament Street first uncovered the post by a Facebook group called "Cadbury Rewards", which is full of mistakes.

Someone who claims to be called Anna Burton and says she's a regional manager at the firm writes in the post: "We are going to celebrate 126 years of Cadbury today by doing something very special for you all.

"We will be sending one Cadbury Hamper to EVERYONE who shares and then comments by 11.59pm TONIGHT."

Users are then urged to click on a link, which leads to a fake website using Cadbury branding.

How to protect yourself from scams

BY keeping these tips in mind, you can avoid getting caught up in a scam:

Parliament Street reportedly warned about the group, which now appears to have been deleted, after not finding any records of an "Anna Burton" at Cadbury.

The confectionary giant was also founded in 1824, meaning it's 196 years old rather than 126, which is another red flag.

Plus, Cadbury's official Facebook page doesn't mention the competition nor the anniversary.

The scam post was accompanied by an image of a women clutching a hamper of chocolate including Twirls, Curly Wurlys and Dairy Milk.

The advert was posted on Facebook over the weekend and by November 8, it'd racked up over 1,700 likes and hundreds of comments.

Some Facebook users were convinced by the scam, with one user saying: "I work for the Royal Derby Hospital on a ward caring for the elderly, we are a Covid ward again, all the staff work so hard, it would be lovely to win one of these and share with the staff."

While another wrote saying she'd like a hamper to go to her elderly friend who carried on working to support patients affected by Covid-19.

She added: "She’s just retired from the NHS where she has worked for 43 years… but she’s stayed on as she felt like she couldn’t go."

A spokesperson for Mondelēz International, the owner of Cadbury, has confirmed that the hamper is a scam.

The firm told The Sun: "We’ve been made aware of a circulating post on social media, claiming to offer consumers a hamper of free Cadbury products.

"We can confirm that this has not been generated by Mondelēz and would urge the general public to not interact or share personal information through the post.

"The security of our customers is our priority and we’re working with the relevant organisations to ensure this is resolved."

Andy Heather, vice president of cyber security experts Centrify, added: "This is the latest in a series of scams whereby social media platforms are being used to elevate awareness and spread the fraud, hijacking official branding and making use of photos and testimonials to fool victims.

"We urge all members of the public to remain vigilant against these phishing attacks and always double check that an apparently sweet deal isn’t going to leave a bitter aftertaste."

A few years ago, another scam offering free chocolate hampers were being shared on Facebook.

And in May, Cadbury warned of a Whatsapp scam that lured users to sign up for a free hamper too.

Other recent scams to watch out for include a Primark scam email that could steal your personal details.

Is Peter Laurence in Roadkill based on a real person?

More than 47,000 British Airways passengers are waiting for refunds