WASHINGTON CROSSING, Pa. — Hundreds gathered on both sides of the Delaware River to watch an annual Christmas Day reenactment of George Washington’s 1776 crossing, a year after pandemic restrictions forced viewers to watch it online.

Reenactors in three boats completed the crossing in about an hour Saturday afternoon under overcast skies but in fairly mild temperatures, a spokesperson for Washington Crossing Historic Park said.

Earlier in the month, about 5,000 people attended a dress rehearsal of the Revolutionary War reenactment amid good weather and good water conditions, volunteer Tom Maddock of the Friends of Washington Crossing Park said, calling it “a great day.”

In 2020, after crowd-size restrictions barred holding the traditional in-person event, park officials posted a video of a reenactment filmed earlier in the month providing what they called a “close-up view.” This year, people entering the visitor center were asked to wear masks, and workers were also masked, officials said. 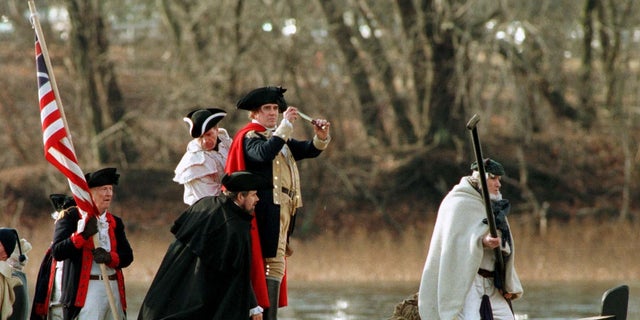 Gen. George Washington, portrayed by Bob Gerenser, 43, of New Hope, Pennsylvania, second from right, crosses the Delaware River with his troops to Trenton, New Jersey, from the Washington Crossing Historic Park in Pennsylvania, during a past crossing.

In years past, thousands have often gathered every Christmas morning on the banks of the river in Washington Crossing, Pennsylvania, and Titusville, New Jersey, to watch historical reenactors set out in boats to retrace the daring 1776 voyage of Washington and his troops.

In 2019, the crossing was completed for the first time in three years with what the Friends of Washington Crossing Park said was probably a record crowd of 4,500 to 5,000 people looking on. The crossing had been scuttled during the previous two years, first by high winds and then by high water.

Other activities at the annual event include reenactments of Washington’s address to his troops, historical speeches and processions, and staffers in period clothing providing public interpretation.

In the original crossing, boats ferried 2,400 soldiers, 200 horses and 18 cannons across the river. Washington’s troops marched 8 miles (13 kilometers) downriver before battling Hessian mercenaries in the streets of Trenton. Thirty Hessians were killed, and two Continental soldiers froze to death on the march.

'It's a Wonderful Life': Jimmy Hawkins and Karolyn Grimes Disagree Over Color Edit

More snow is predicted to arrive over the weekend