Waving goodbye to Scotland! Queen and Prince Philip are driven away from Balmoral estate as they cut short their summer holiday to spend two weeks at Sandringham together

The Queen and Prince Phillip have now departed from Balmoral Estate as they cut short their annual summer holiday in Scotland.

The royal couple, who have spent the last six weeks at their Aberdeenshire home, waved to photographers as they were whisked away by car for the airport, roughly an hour away.

Meanwhile Prince Andrew, 61, was also seen departing from the estate after spending roughly two weeks with his parents, amid claims he had been visiting his 94-year-old mother for ‘crisis talks’.

The Queen, 94, and her husband, 99, are now set to travel to Sandringham for a fortnight break before their return to ‘HMS Bubble’ at Windsor, with reports claiming Prince Philip is ‘being made’ to return to Windsor Castle because there is not enough staff to create two anti-Covid-19 bubbles. 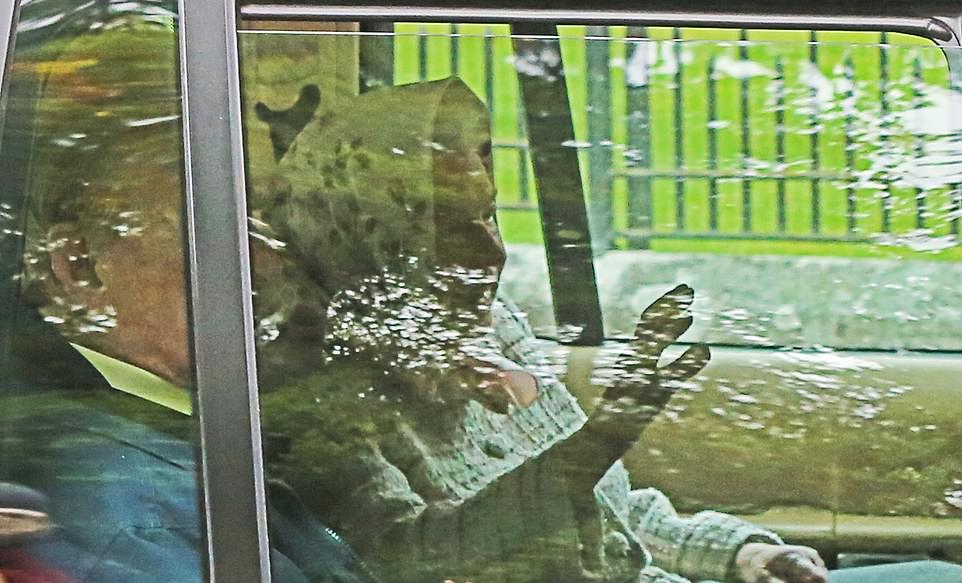 The Queen, 94, and Prince Phillip, 99, offered a wave as they departed from their Balmoral estate at the of end their annual summer holiday in Scotland 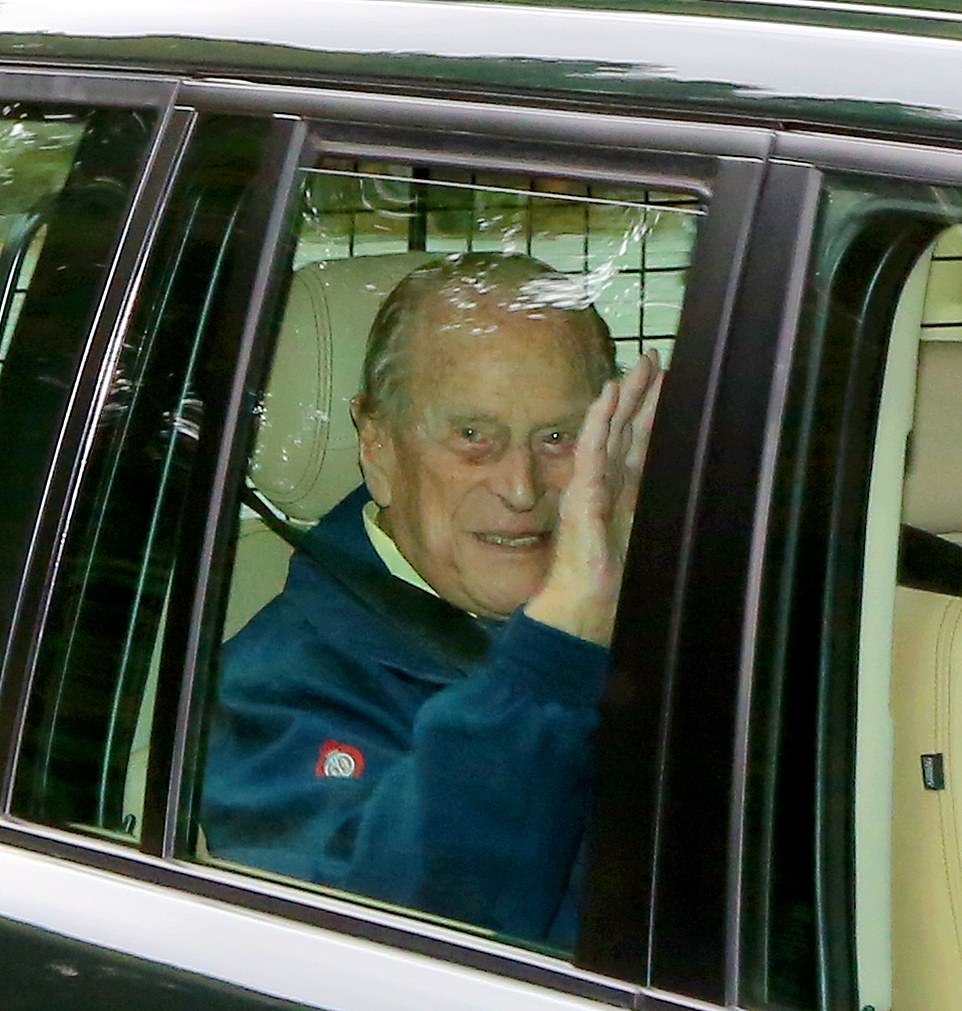 Prince Andrew is believed to have been in Balmoral for a week with reports suggesting he journeyed up to Scotland for crisis talks.

He has been accused of failing to help US prosecutors in their investigation into paedophile billionaire Jeffrey Epstein and the financier Ghislaine Maxwell.

A source told the Sun: ‘The Queen and Andrew will have lots to discuss. So much has come out over the summer.

‘The Queen wants to be kept informed and she will not be back at Windsor until early October.’ 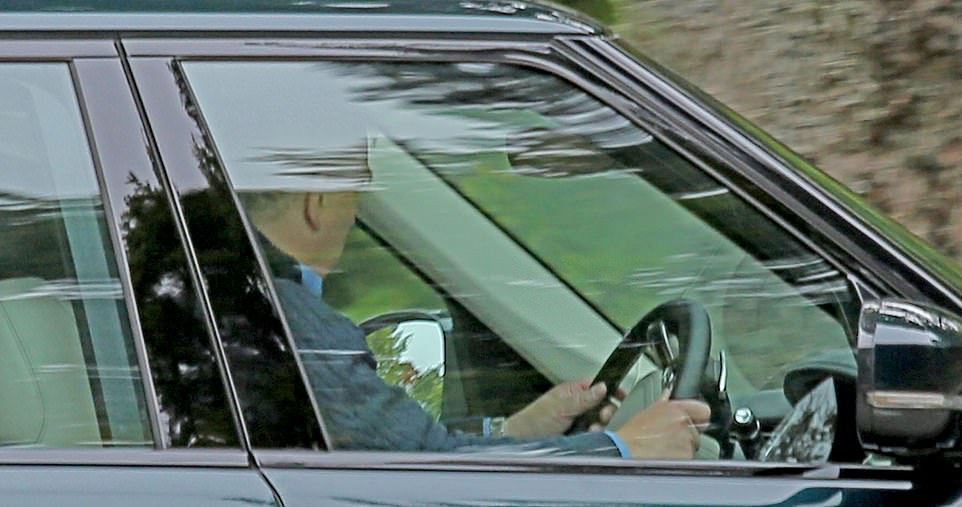 Meanwhile Prince Andrew, 61, who is believed to have spent two weeks with his parents at the estate, also departed earlier today

The monarch and Duke of Edinburgh typically remain at Balmoral, in Aberdeenshire, until next month but surprised many royal fans by leaving early and spending time at Sandringham instead.

The Palace confirmed the Queen hopes to resume ‘selected audiences and engagements’ in London in October for the first time since the coronavirus crisis struck the UK in March.

She and Philip are now due to travel to Norfolk together to ‘spend time privately’ at the Sandringham Estate, where the Duke spends much of his retirement at Wood Farm.

The Queen will then return to Windsor in October, from where she will travel to Buckingham Palace for working visits. 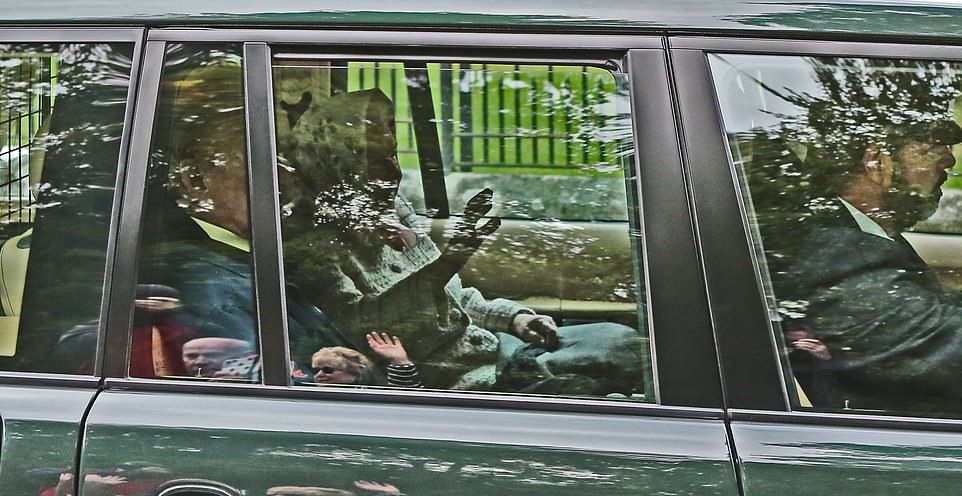 The royal couple raised a hand in greeting as they were whisked off to an airport in Aberdeenshire, roughly one hour from Balmoral estate 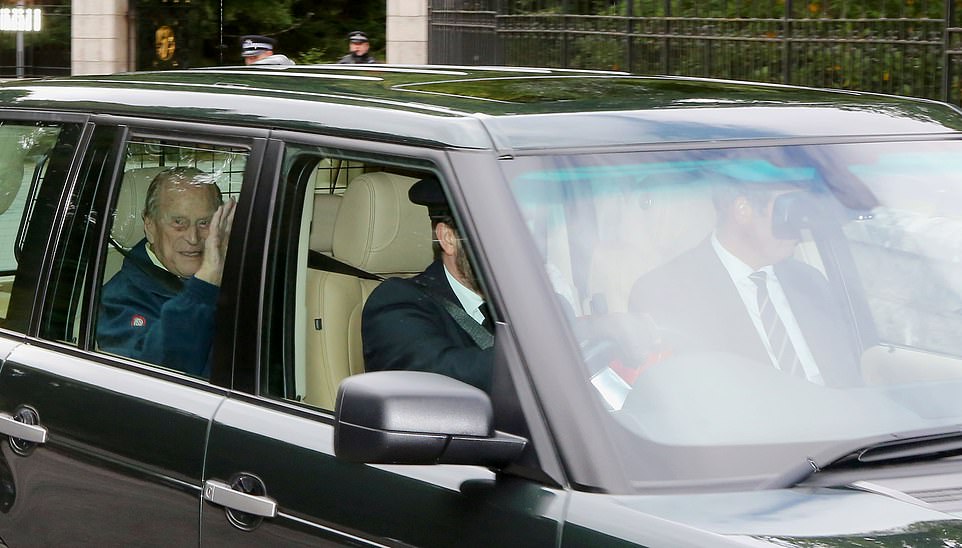 Prince Philip and the Queen have spent six weeks at their Scottish home, and will now return to Sandringham, where the Prince of Wales spends most of his time

In a statement confirming the news last week, the Palace said: ‘The Queen and The Duke of Edinburgh will depart Balmoral Castle during the week commencing September 14 to spend time privately on the Sandringham Estate.

‘Subject to the finalisation of the autumn programme, Her Majesty’s intention is to return to Windsor Castle in October and to resume the use of Buckingham Palace for selected audiences and engagements.

‘These plans will be kept under review and will of course be subject to all relevant guidance and advice.’

An insider told The Sun last week that Prince Philip, who normally spends most of his time at Sandringham Estate, would also return to Windsor as ‘a compromise’, adding:  ‘Philip didn’t want to go to Balmoral and doesn’t want to go to Windsor.

‘But there is not enough staff to make two bubbles so he is being made to go. It makes far more sense to keep them together.’ 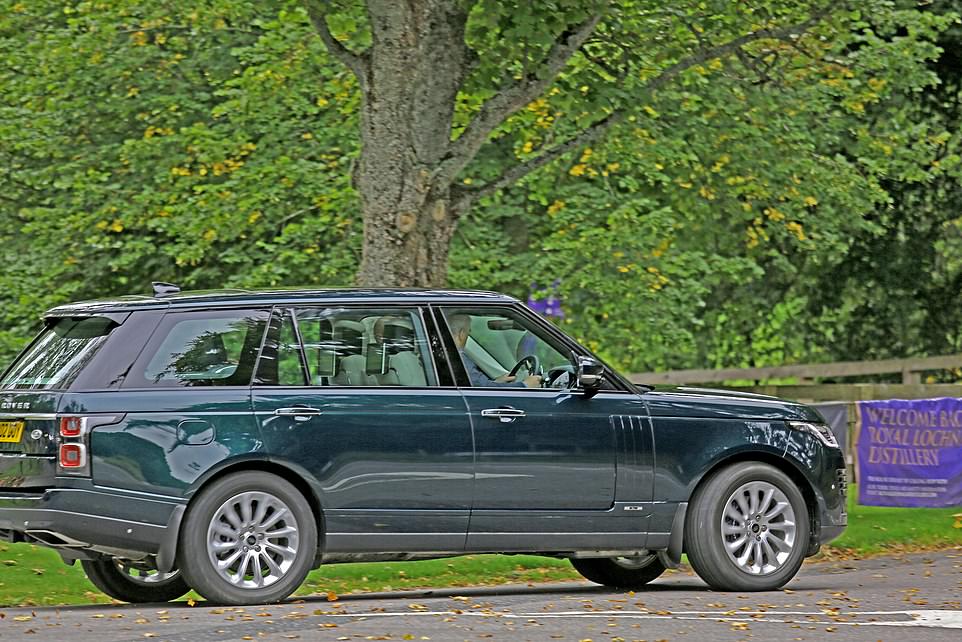 Earlier today, their second eldest son Prince Andrew could be seen leaving the estate amid claims was visiting his 94-year-old mother for ‘crisis talks’.

The Queen and the Duke of Edinburgh arrived at Balmoral, in Aberdeenshire, at the start of August and have enjoyed visits from family in the weeks since.

The monarch’s annual holiday to Balmoral has been a little different this year amid the coronavirus pandemic.

It is understood staff quarantined for two weeks in order to minimise the risk of the Queen or Prince Philip, who are both in their 90s, being exposed to Covid-19 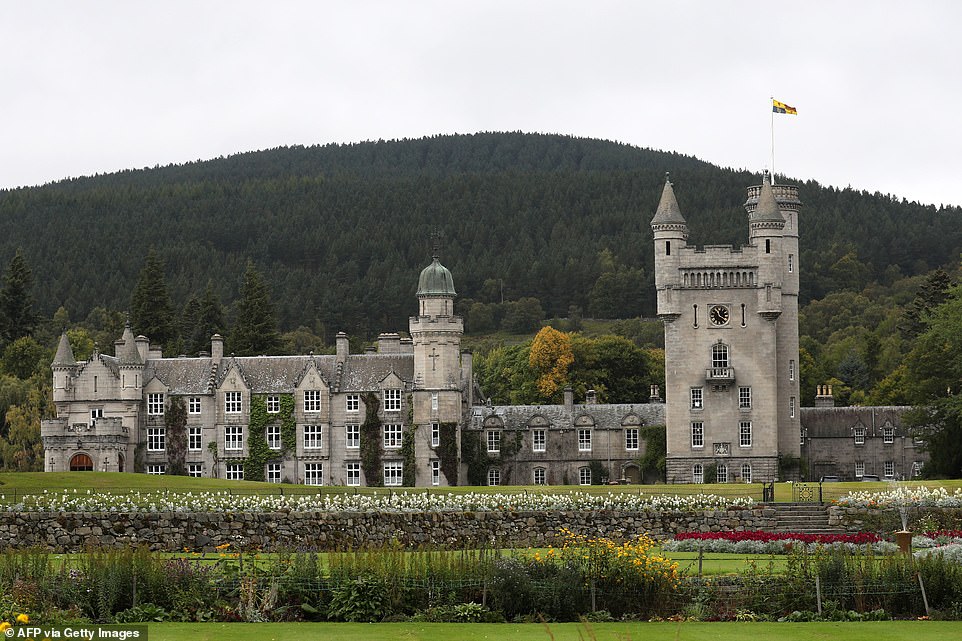 The Queen and the Duke of Edinburgh arrived at Balmoral (pictured), in Aberdeenshire, at the start of August and have enjoyed visits from family in the weeks since. Stock image

It is thought staff also minimised their contact with people outside the royal household in order to create a ‘Balmoral bubble’ designed to keep the Queen and Prince Philip safe.

Measures were also taken by other members of the royal family who came to visit.

The Duke and Duchess of Cambridge have spent time on the estate, as have Princess Anne and Prince Andrew.

But family members did not stay in the castle with the Queen and Duke of Edinburgh as they had done in previous years and were instead housed in other properties in the grounds of the 50,000-acre estate.

They were able to meet the royal couple for outside activities instead including walks, horse riding and picnics. 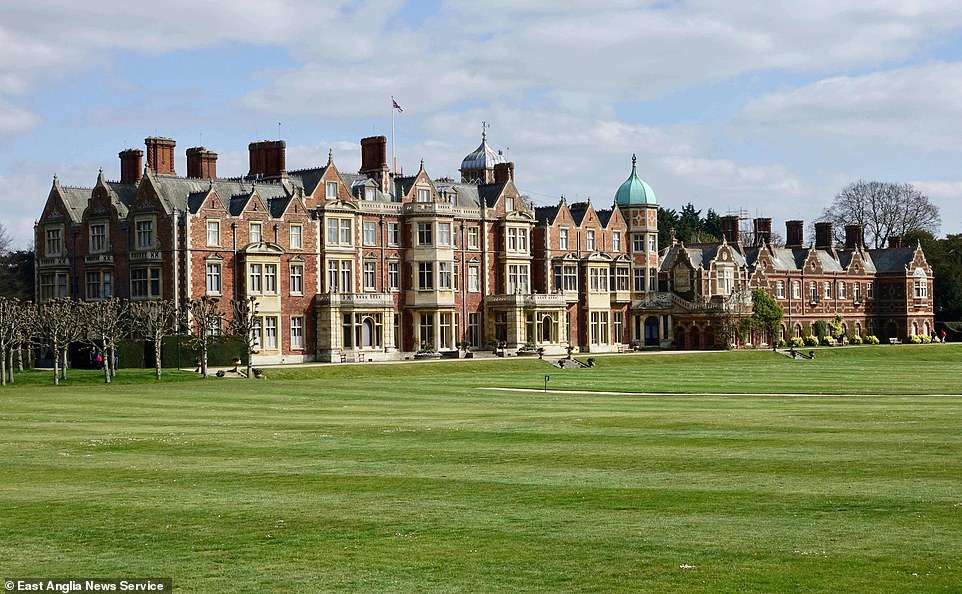 It comes following reports that the Queen is set to make Windsor Castle her main home and won’t resume residence at Buckingham Palace this year, according to a royal source.

Her Majesty would like to ‘commute’ to London for engagements if it is safe to do so, the Sunday Times reported.

It is believed the Queen’s absence from Buckingham Palace will be her longest during her 68-year reign.

The Queen would usually go back to the premises in October following her summer break in Balmoral. 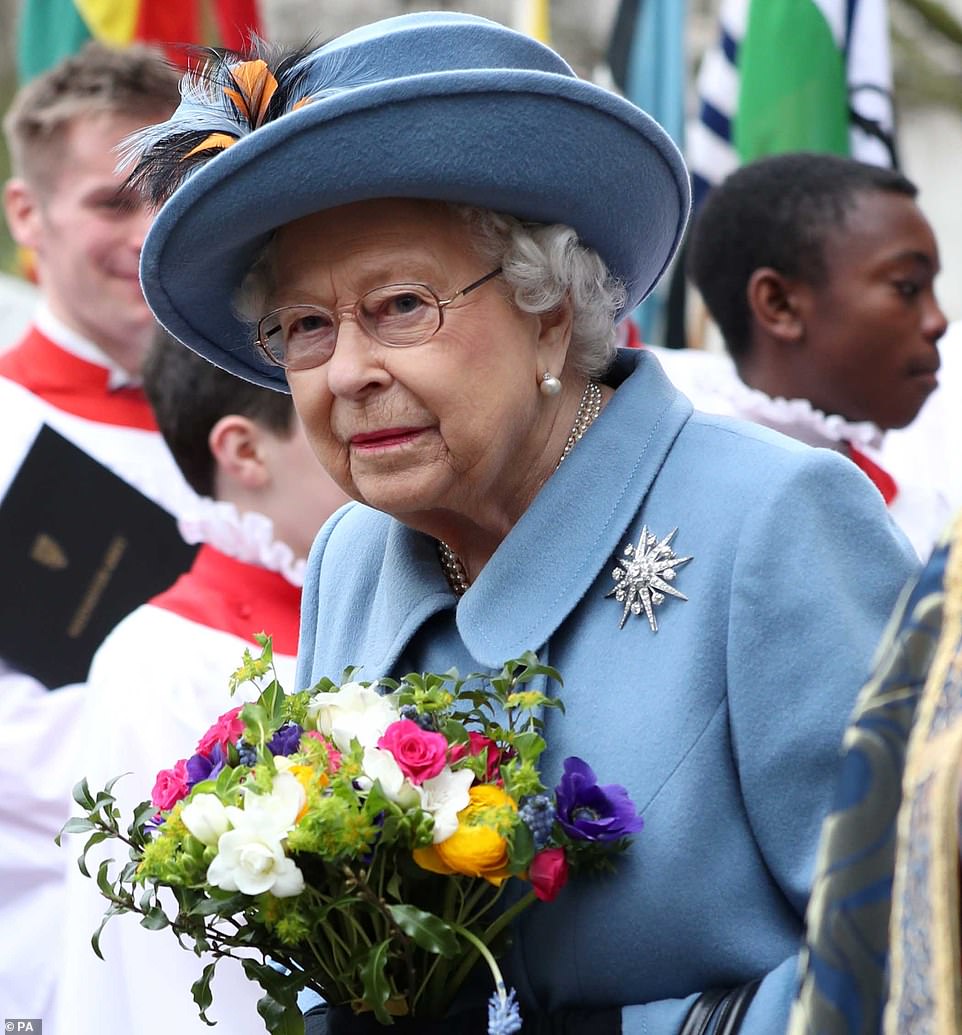 Instead, following her time in Sandringham, she will return to Windsor Castle where she self-isolated with the Duke of Edinburgh from March 19 prior to their Scottish holiday.

A royal source said: ‘There is a desire to get Buckingham Palace up and running again as a working palace, but only if all the relevant advice suggests that it is appropriate to do so.’

It is believed that proposals are being reviewed for how the Queen could safely attend commemorations at the Cenotaph on Remembrance Sunday in November.

But Her Majesty apparently won’t be returning to Buckingham Palace again until the threat from COVID-19 is extinguished.

However, it is thought that the Queen will be spending her usual Christmas break at Sandringham in Norfolk.

Neo-Nazi, 32, who made racist posts as Joker sobs at sentencing

Bake Off The Professionals 2019 start date: When does it start? How many episodes?

Family share harrowing pics of gran, 90, after she was 'sexually assaulted and beaten by fellow care home resident'