Home » Lifestyle » ‘We tried it the other way’: Morrison and ministers push Liberals to adopt quotas

The Liberal Party’s long-held resistance to quotas to ensure women get elected is shifting after Prime Minister Scott Morrison flagged he is very open to the idea and senior women frontbenchers said it was time they were introduced.

A hunt is also on for Coalition staffers involved in sharing videos of lewd acts performed in Parliament House, with the government promising they will be sacked once they are found. 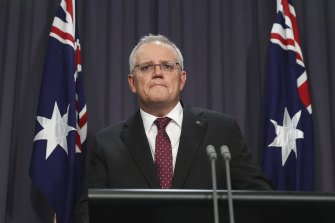 An emotional Prime Minister Scott Morrison said women had put up with too much “rubbish and crap” for too long.Credit:Alex Ellinghausen

Mr Morrison gave an emotional speech in public and to the Coalition party room meeting on Tuesday morning about the “absolutely shameful” explicit videos, and the treatment of women more generally.

“These events have triggered, right across this building, and indeed right across the country, women who have put up with this rubbish and this crap for their entire lives, as their mothers did, as their grandmothers did,” Mr Morrison said on Tuesday.

“We have been talking about it in this place for a month, they have been living with it for their entire lives.”

Mr Morrison has also opened the way to stand Mr Porter aside. The Prime Minister has taken advice from the solicitor-general and is now talking it through with his own department “about how that sits with ministerial standards” and intends to make “further decisions” about the West Australian MP’s future.

The Prime Minister said he was “very open” to the idea of introducing quotas for female MPs. Labor introduced quotas for women running in winnable seats in the mid-1990s, which has led to almost half the federal caucus being female compared to just one quarter of the Coalition.

Ministers Marise Payne, Karen Andrews, Sussan Ley and Melissa Price spoke out in support of the measure along with a slate of other Liberal MPs as the party searches for ways to recruit more women into parliament in a bid to change its culture.

“We tried it the other way and it isn’t getting us the results we would like to see so I would like to see us do better on that front,” Mr Morrison said, adding he thought many other Liberals were coming to a similar view.

Ms Andrews is one of those changing her mind, saying the work done so far “hasn’t had the success that it’s needed so far”. 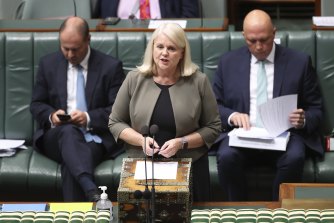 Cabinet minister Karen Andrews has flipped her “anti-quotas” stance because the Liberals hadn’t been successful at getting enough women into parliament.Credit:Allex Ellinghausen

“I’ve always been quite anti-quotas because I felt that it was a disadvantage to women because they would be perceived as only getting promoted, only getting a job because they were a number,” she said. “We can’t continue doing the same thing and expect a different outcome. So I’m certainly open to a discussion about quotas.”

Ms Ley said that right now she was “for the outcome more than the mechanism” but she had called for a debate on quotas for some time.

“We need more women believing they can run for politics and knowing they will be supported in doing so,” she said.

Senator Payne, the Minister for Women, said there were “significant frustrations” in encouraging more Liberal women into Parliament and the party should take a “good, hard look” at quotas “because clearly, there are ongoing issues that mean in parts of our organisation, we have not been able to achieve the outcomes we want”.

Ms Price said the party had to have a “serious conversation” involving men and women about what quotas would mean, although she didn’t see them as the only answer.

Liberal backbencher Katie Allen said she was open to quotas if they helped get more women “in the decision-making room” and Senator Hollie Hughes said everything should be back on the table. Veteran MP Russell Broadbent, who has asked the Prime Minister to convene a summit of women’s organisations, also thinks quotas are a good idea.

Melissa McIntosh, who represents western Sydney seat Lindsay, said she had an “honest and detailed discussion” with the Prime Minister last week that included talking about the experience in the corporate sector with quotas and other mechanisms like mentorship programs that were effective at elevating women into leadership positions.

However, other female MPs including Fiona Martin and Nicolle Flint believe reportable targets are a better option than mandatory quotas.

“I didn’t come to Canberra to fill a quota,” Dr Martin said.

The Liberal Party’s federal executive has recently backed a range of measures aiming to increase the number of women among its ranks, including continuing the Enid Lyons Fighting Fund to support Liberal women running for office or re-election. Half of the new federal MPs elected in 2019 were women.

“Progress has been made. However, much more needs to be done,” a party spokesman said.

Mr Morrison acknowledged that many people had not liked or appreciated his own personal responses to the allegations of sexual assault and harassment, and the tens of thousands of women who rallied around the country in the March 4 Justice last week.

He has come under criticism first for saying his wife Jenny had told him to think about Ms Higgins as if she was one of his daughters, and for making remarks in Parliament that were interpreted as saying women should be grateful they were not shot for protesting.

But he said he had listened to the stories of women over the past month.

He spoke of women being too afraid to call out bad behaviour for fear of losing their job, of being “overlooked and treated like they have nothing valuable to contribute”.

Colleagues in the party room said they believed the Prime Minister was now leaning into the issue and pointed out he had a history of only getting behind issues when he intended to act.

Mr Morrison addressed all Coalition staff on Tuesday afternoon and said there would soon be mandatory face-to-face workplace health and safety training for MPs and staffers. He also intends to establish a Coalition staff reference group as a catch-all advocacy team where people could raise issues informally, ask for advice and have complaints taken forward anonymously, and a Coalition human resources team to provide more formal guidance.

Finance Minister Simon Birmingham, whose department is the formal employer of all political staffers, said the only thing standing between other staff members involved and being sacked was their identification.

He said colleagues were “engaging” with the female MP and she had been made aware of her options if she wanted further support.

Labor’s Don Farrell asked Senator Birmingham in an estimates hearing whether he was aware that non-political staff in Parliament House had attempted to meet union representatives with concerns about the Ten News reports, but the union officials were blocked from entering the building. Senator Birmingham said it was the first he or Senate President Scott Ryan had heard of the matter and undertook to investigate.

Ms Jenkins is also starting a review of the workplace culture within Parliament House, and outlined her plans to coalition MPs on Tuesday. She met with Labor MPs and staff last week. She made it clear her intention was not to investigate individual complaints but to outline how to create the cultural reform needed.

Man, 21, dies after being stabbed in leg during brawl outside pub as two teens arrested – The Sun

Jeremy Kyle in furious rant at 'disrespectful' guest who burst out on stage singing 'belly's gonna get ya!'