Wedding photographer divides opinion by DELETING couples’ snaps when they refused him food, water or a break after paying just $250 for a 10-hour job

A photographer has ignited a furious debate online by revealing he deleted a couple’s wedding photos after being expected to work in the searing heat all day without a break for water and food.

The anonymous poster, who shared the story on Reddit, asked forum users ‘Am I the A******’ explaining he’s a dog groomer and not a professional photographer, other than taking pictures of pooches for social media all day.

He ‘d agreed to help out a friend who was getting married on a shoestring, for a fee of $250, and after working all day, he was refused a break by the groom.

His friend gave him an ultimatum saying he had to continue with food or water, or go home, so the photographer deleted the wedding pictures and left.

While some commenters said his actions were too ‘harsh’ the majority sided with the photographer, saying he’d been taken advantage of by the couple. 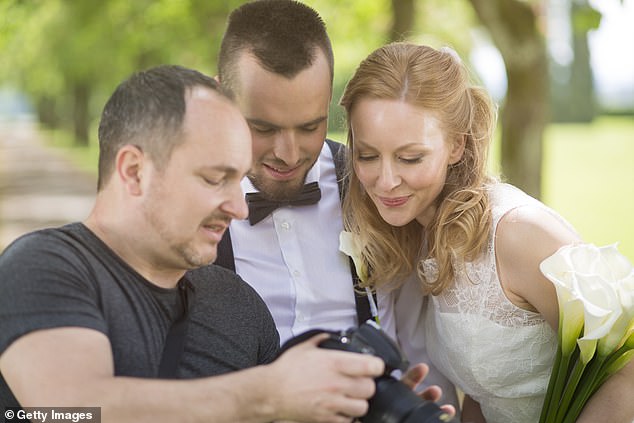 A photographer as asked people online whether it was unreasonable to delete wedding photos after being denied water, food, and a break (stock image) 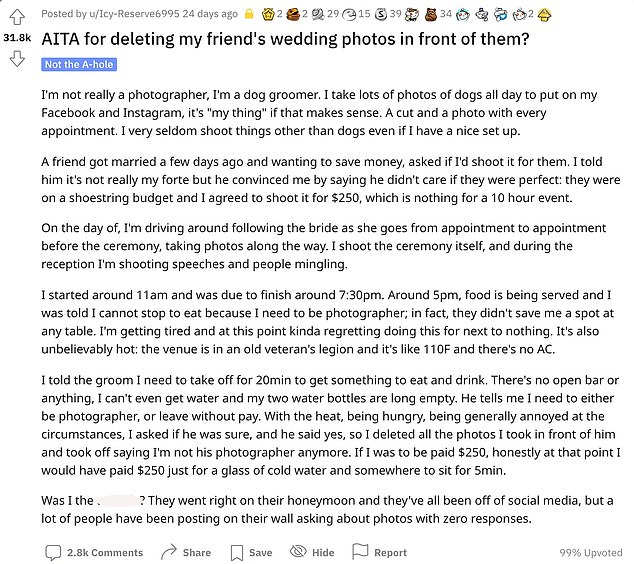 The snapper explained the situation on Reddit’s ‘Am I the A******’ forum, prompting a fierce debate from other users

‘A friend got married a few days ago and wanting to save money, asked if I’d shoot it for them. I told him it’s not really my forte but he convinced me by saying he didn’t care if they were perfect: they were on a shoestring budget and I agreed to shoot it for $250, which is nothing for a 10 hour event.

‘On the day of, I’m driving around following the bride as she goes from appointment to appointment before the ceremony, taking photos along the way. I shoot the ceremony itself, and during the reception I’m shooting speeches and people mingling.

‘I started around 11am and was due to finish around 7:30pm. Around 5pm, food is being served and I was told I cannot stop to eat because I need to be photographer; in fact, they didn’t save me a spot at any table. I’m getting tired and at this point kinda regretting doing this for next to nothing. It’s also unbelievably hot: the venue is in an old veteran’s legion and it’s like 110F and there’s no AC [air conditioning].

‘I told the groom I need to take off for 20min to get something to eat and drink. There’s no open bar or anything, I can’t even get water and my two water bottles are long empty.

‘He tells me I need to either be photographer, or leave without pay. With the heat, being hungry, being generally annoyed at the circumstances, I asked if he was sure, and he said yes, so I deleted all the photos I took in front of him and took off saying I’m not his photographer anymore. If I was to be paid $250, honestly at that point I would have paid $250 just for a glass of cold water and somewhere to sit for 5min.

‘Was I the a******? They went right on their honeymoon and they’ve all been off of social media, but a lot of people have been posting on their wall asking about photos with zero responses.

Social media users were quick to jump in with responses lambasting the couple for how they had treated the photographer.

One commentator wrote: ‘Yeah seriously, what kind of friend is this?

‘We had almost this exact situation with one of our friends, but we paid her 250 just to s*** photos before the wedding and then during the 20 minute ceremony, nothing else. She of course had a seat and we would never have denied her a break or food. Just awful.’

Another agreed, adding: ‘Got married, and anyone we hired was provided a meal and allowed to take breaks. They swindled you.’

A third was even more damning of the wedded couple, saying: ‘These aren’t “friends”, these are leeches.’

And another poster said: ‘You could have risked your health and they treated you like s***.’

Some users pointed out how risky it was of the groom to issue an ultimatum – and that when doing so, people should be willing to accept the consequences

One Redditor wrote: ‘That sounds horrible. I understand making rash decisions like this and then regretting them.

‘But IMO that was not an a****** move. Nobody who gives ultimatums can then fault people for choosing one of the two options presented. Like what kind of logic is that? Groom: OP you either choose 1. Or 2. OP: I choose 2. Groom: shocked pikachu.’

While another said: ‘A hard, but important, lesson to learn in life is to never issue an ultimatum unless you are ready, willing and able to accept either choice.

‘Too often people are bluffing to get their way but then learn the hard way when said bluff is called.’

Some users felt the photographer should take pre-emptive measures in case they got badmouthed by the couple.

One Redditor wrote: ‘You should make a post explaining the situation before they get back and blame it all on you.’

Another agreed, writing: ‘I would make a post explaining to people, because the groom has had all honeymoon to make up some excuse or story if he hasn’t already told her ( I doubt it as you would’ve heard from her) so you need to get there before they do!’

A third concurred, saying: ‘I agree. This could get ugly fast. Protect yourself.’ 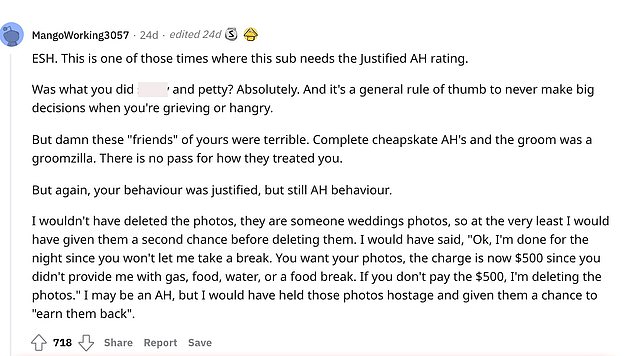 Some posters did think the photographer had behaved badly by deleting the photos, with one describing the move as ‘pretty harsh’

However, a few posters did have some sympathy for the couple, saying the photographer should have not deleted the pictures.

One wrote: ‘As satisfying as it is, they should have just left and then when her friend asked about them later should have said she’d sell them the pictures for double or triple the price.’

And another said: ‘Didn’t have to delete the pictures but I don’t blame you for leaving.’

A third blamed all parties for the unfortunate outcome, writing: ‘I’m surprised this is so low. Groom is an a******, but damn, just wiping out every single wedding photo like a chaotic evil Thanos? That’s pretty harsh…

‘I agree with taking the ultimatum, leaving and not documenting the rest of the wedding. I don’t know about holding the photos hostage for payment or demanding more money or anything.

‘That’s all hypothetical and really outside of the requested judgement here. Whatever agreement y’all might have come to afterwards isn’t relevant anymore because the wedding photos are gone. And that kinda makes ESH [everyone sucks here].’

Minari's Alan Kim Steals The Hearts Of Twitter After His Emotional Acceptance Speech At The Critics Choice Awards!

Spike Lee is Getting His Very Own Funko Pop