The unionist who led workers through the Hawke and Keating era reforms that modernised Australia's economy and underpinned years of economic growth has warned Australia's workers have already shouldered their fair share of the costs of the coronavirus pandemic.

Former Australian Council of Trade Unions secretary Bill Kelty said workers had run down their holidays, long service leave and superannuation instead of drawing an income to keep businesses afloat. Mr Kelty, who ran the ACTU from 1983 to 2000, branded calls for workers to be more flexible from some politicians and employer lobbies as "irrelevant" and "ideological" in a defence of Australia's industrial system. 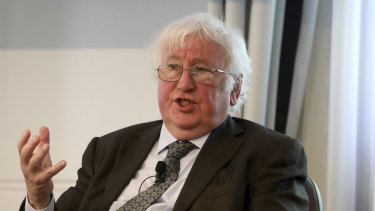 The government has said industrial relations reform will be its first step as it tries to get jobs growing after the coronavirus pandemic recedes.

Unions and employer bodies have collaborated to change pay and conditions agreements for workers, the minimum wage panel handed down a small rise delayed for hard-hit industries last month and JobKeeper has allowed businesses to drop staff hours. "What more do you want of working people?" said Mr Kelty, who added he supported all those measures.

"I would’ve thought we've got a society right now where the industrial relations system is proving its mettle," Mr Kelty said. "It’s not an obstacle to anyone."

Late last month Treasurer Josh Frydenberg said labour market flexibility would be the "first cab off the rank" for the government's reform agenda and said the government wanted businesses to retain the powers to change staff hours and duties that came with JobKeeper even when that scheme ends. Some employer groups have also called for changes to workplace laws to make it easier for businesses to hire casual workers and employ workers outside industry awards.

State and federal governments' priorities, Mr Kelty said, should be fixing "gaps" in the system that had allowed the coronavirus to spread. He joined a chorus of calls from business groups and unions for the government to give workers paid pandemic leave to remove any financial cost from workers who have symptoms of the coronavirus. "You want people to be tested?" Mr Kelty said. "Protect them."

Attorney-General Christian Porter is running five working groups with a view to longer term industrial relations reform, and Mr Kelty, who led the Hawke-era Accord process with business, unions and government, said the collaborative approach was "absolutely smart". Giving more training and better pay to aged care workers and nurses and restricting sub-contracting in the security industry were two industrial lessons Australia could learn in the wake of the crisis, he said.

Poorly paid and trained aged care workers have been blamed for spreading the coronavirus between nursing homes in Victoria in a major source of infections. Hotel quarantine in Victoria was managed on the ground by security guards, including some employed by sub-contractors, who unintentionally allowed the coronavirus to spread from travellers.

Prime Minister Scott Morrison on Monday announced a paid pandemic leave disaster payment of $1500 for workers without sick leave who need to self-isolate for 14 days.

Conor McGregor Still Training His Ass Off Despite 'Retirement'

What's the Worst Guess on The Masked Singer?

True Thompson Takes Her First Steps — And Khloé Kardashian Captured It All On Video! So Cute!

'90 Day Fiancé': Big Ed Brown Is Selling Costumes So People Can Be Him for Halloween