Who Do You Think You Are? Boy George

Boy George grew up believing that he was related to Irish republican Kevin Barry, who was executed by the British in 1921. That's part of what the pop star, DJ, fashion designer and judge on The Voice aims to investigate in this episode. 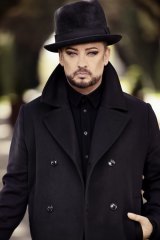 Boy George is going back to his roots in Who Do You Think You Are? Credit:SBS

Focusing on his mother's side of the family, he travels to Dublin and meets with a number of historians who reveal different chapters of his family history. "I hope it's not too sad," his mother, Diana, says of his project before he departs. But it is. And he finds it quite confronting at times, for while there are indications of stoicism, strength and survival, there is also information about hard lives lived in harsh conditions. "I'm proud and I'm sad," George declares at the conclusion of his voyage.

When a naval intelligence officer is kidnapped, the NCIS team is ordered into action. Their mission is to find her before she can be traded to an unidentified power keen on extracting the information she possesses about US security operations.

Armed with their usual bag of tricks – state-of-the-art surveillance equipment, quick thinking and a surfeit of smart-alecky banter – the team is quickly on the case. There's nothing here that departs from the series' tried-and-true formula. However, occasional guest star Gerald McRaney, as retired Admiral Kilbride, an old-school warrior who bangs on about how things were better in the good ol' days, is a bonus.

'The Bachelor': Hannah G. Had to Stay in Portugal Without Her Phone For Over a Week After Colton Broke Up With Her

Mark-Paul Gosselaar Joins Mixed-ish in a Key Role — Meet the Rest of the Cast!

Jerry Weintraub Approved of ‘Ocean’s 8’ Before His Death