A mother has been left furious after she was branded a ‘racist’  by a stranger for calling her mixed-race son a ‘cheeky monkey’.

The Mumsnet user, who is white, was confronted by a black woman in the park who told her she needed to ‘educate’ herself about her son’s race.

The mother, known only by her username, Jumpiin said she was ‘reeling’ at the accusation, and asked other parents if she was right to be upset.

The message board was divided, as some accused her of being insensitive for giving a mixed-race boy the nickname because ‘monkey’ is an offensive term used against black people. 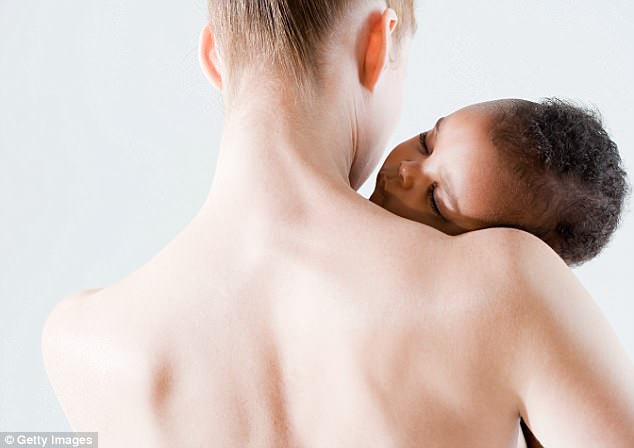 The woman accused Jumpiin of treating her son like an accessory and accused her of not knowing anything about her son’s race.

She revealed that she’d actually been learning about her partner’s Swahili culture, and was learning the language with her son.

She said: ‘Aibu (am I being unreasonable) to think that she was in the wrong here and that she is a part of the problem?

‘And to think that I can call my child whatever I want as long as there’s no malice behind it?!’ 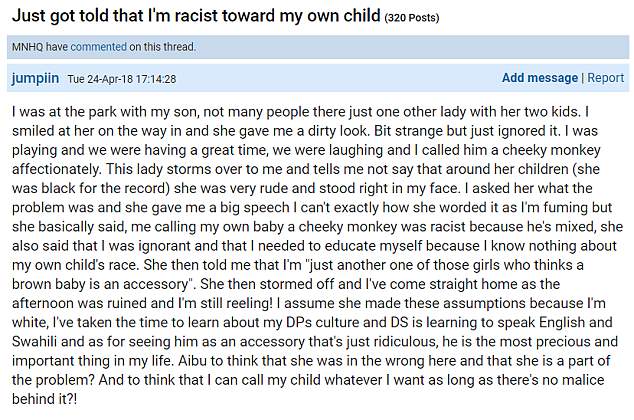 But some Mumsnet users didn’t join in with her anger, and accused her of being ignorant of the history behind the word.

ArcheryAnnie posted: ‘I can understand you feeling defensive, but honestly, if you want to continue to do the best for your child, please do listen to other people who have much more experience of racism than you do.

‘You might not always agree with them, but getting defensive and asking for validation from others about how mean they were to you really doesn’t help either you or your child.’

EnthusiasmIsDisturbed said: ‘I would have thought if you have a mixed race child you would be aware of racist terms that’s have been used and avoid them

TinklyLittleLaugh agreed: ‘I’m inclined to think that, on the whole, a black woman is going to have a better understanding than a white woman, of what is or is not racist, regardless of the white woman’s relationships.

Others shared the mother’s anger, and called the unnamed woman ‘ridiculous’ and ‘mad’

However, many agreed with her, calling the unnamed woman ‘ridiculous’ and ‘mad’.

LorelaiRoryEmily said: ‘Wow. That is ridiculous op, I wouldn’t give her head space. People are mad.’

JamieFrasersKilt posted: ‘Does that mean when I called my socially anxious kids, chicken, I was committing some sort of faux pas? She was being completely ridiculous.’

Greenlynx agreed: ‘She behaved very rude towards you. You were playing with your child. it’s none of her business.’

Stars Celebrate Their Kids Who Virtually Graduated as Class of 2020