Home » Who Is Michelle Buteau? Netflix’s ‘The Circle’ Host Is Way More Than A Narrator IRL

Netflix has introduced you to many a talented entertainer over the years. The streaming service’s hit reality TV show, The Circle, which debuted stateside in January 2020 and returned April 2021, brought the voiceover skills of Michelle Buteau, 43, to your living room. The contestants got most of the attention in season one, but Michelle appears as herself, no #catfishing here, to kick off season two. She’s back with all her witty quips and commentary on the secluded contestants.

If this is your intro to her, there’s so much more to her career and personal life than what you hear on the streaming service. Michelle is a respected comedian, mom, and author.

Here’s what to know about the multitalented host of The Circle, Michelle Buteau.

Michelle is a longtime stand-up comic.

She quit her job editing the local news at WNBC after 9/11. “I was like, ‘Well this is crazy,” she told Variety. “Now we’re working 16-hour shifts to basically edit a real-life horror movie.’ My news director said they would be offering free therapy for everybody, and I was in my 20s, so I was like, ‘I don’t need therapy! I’m going to try stand-up!’ And it’s so many years later, and I could kick myself: ‘You should have had f—ing therapy.’ But I started stand-up and I never stopped.”

In 2006, Comedy Central tapped Michelle for her first TV spot. “When that happened, I felt like I became part of this club where the industry wanted to hire me,” she told The Cut. “It took a good four or five years of doing this thing that I love to do, and having no idea where it would go and whether it could make me money.”

She’s landed multiple TV and movie gigs since then.

Michelle played Veronica in the Netflix rom-com Always Be My Maybe and appeared in BET Plus’ series The First Wives Club with Jill Scott and Ryan Michelle Bathe. She also co-hosts the podcast “Adulting” with fellow comedian Jordan Carlos.

She also has a one-hour Netflix special, Welcome to Buteaupia, streaming now. It was filmed in New York City on March 1, 2020. “I miss stand-up and realize now how therapeutic it was for me to connect with people—just to yell righteous stuff onstage,” she told Parents. “I’m glad my special is out—it was taped right before New York City was locked down.”

And, of course, she’s the host with the most roasts on The Circle for two seasons and counting.

Michelle published her memoir Survival of the Thickest in 2020.

Yes, you can buy it and pour over all her hilarious musings anytime. 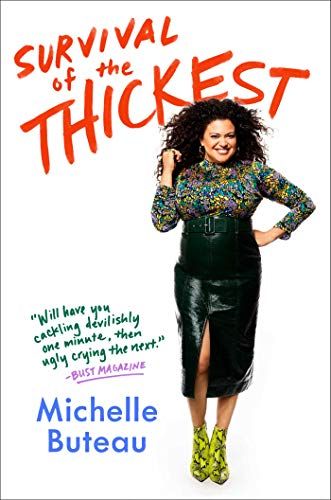 Michelle admitted that her writing process was anything but efficient in an interview with NPR. “I thought ‘I’m gonna bring the twins home and write while they’re sleeping.’ WHAT?! And then I was like, ‘I’ll take the twins to Majorca with a nanny and then I’ll write in the cool, Mediterranean breeze while eating a paella in between.’ WHAT?! Cut to me on the subway with one finger trying to type… girl it was a mess.”

Michelle grew up in New Jersey.

Both her parents are from Caribbean islands, Haiti and Jamaica. When she’s not touring comedy clubs around the country, she calls The Bronx home with her family.

She’s a mom to adorable twins.

Truly, her toddlers are the cutest. Michelle married her husband Gijs van der Most, who’s a Dutch photographer, on July 31, 2010. They share daughter Hazel and son Otis, who were born via gestational surrogate January 2019.

Michelle opened up about her five-year fertility struggle in a recent Parents interview: “We just need a hug and perhaps a glass of wine. Honestly, sometimes people going through it don’t even know what they’re going through. I didn’t realize I was in a world of hurt until the kids arrived. Then I thought, ‘How did I just walk around with bruises all over my body and needles in my suitcases, trying to be funny onstage?’ That is wild. But to get back to that question, it’s mostly not even in what you say, it’s in how you say it.”

“I’m an only child, and I think it’s a miracle that they will always have each other and have this bond,” she added. “Plus, people are into twins. I get stopped in the street. Twins make people happy.”

The cameras don’t miss much on The Circle, but if you want more intel on the living sitch for all the contestants, Michelle’s gotchu.

Michelle supports several causes that are important to her.

On the top of her list are education in Jamaica, Planned Parenthood, ACLU, Black Lives Matter, and women’s marches. “To name one organization is like to name your favorite Whitney Houston song, you can’t; there’s always going to be more than one,” she told Variety.

Chromecast owners poised to get a massive Netflix redesign

The IndieWire Sundance 2020 Bible: Every Review, Interview, and News Item Posted During the Festival