Home » Lifestyle » Who was happier at 60? LIZ JONES says her mum was the lucky one

Who was happier at 60? Our star writer LIZ JONES say her mum was the lucky one

Who was happier at 60? When her mother reached the milestone, she was grey, had false teeth and could barely walk… so why, as she hits the same age, does our star writer LIZ JONES say her mum was the lucky one

We could be two entirely different species. From different worlds or even galaxies. Separated by centuries. Not a mum and her daughter, divided by a single generation. Because this is my mum as she approached her 60th birthday, and this is me just after mine.

In her picture, my mum is unashamedly an old woman. I remember the day I took this snap of her, on holiday in Jersey in the summer of 1979. Mum had limped and hobbled to the beach, gallantly carrying our buttered rolls. But still she got the giggles as we pulled her up from the sand at the end of the day.

She would no more have worn a swimsuit, or put on sun cream, than fly to the moon. Having had seven children, she had no desire to look young, or thin. In this photo, she already had a full set of false teeth and grey hair. Normally, she wore glasses. 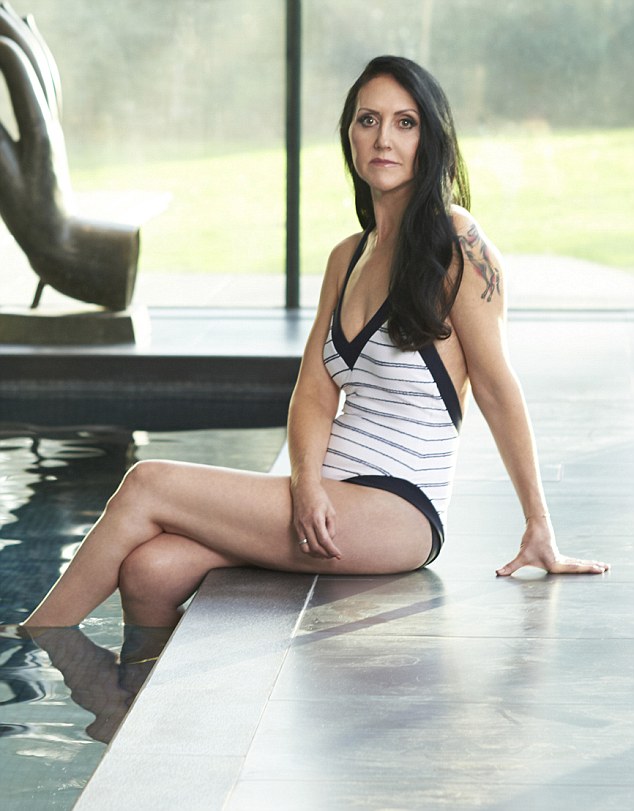 Now look at the photograph of me. I’m the same dress size as when I turned 16. You can tell I’ve dedicated my life not to raising a family, or giggling, but to being ‘beach body ready’. Effort is etched on my face. I’m anxious, too: do my arms look fat? Is my hair, dyed fortnightly from the day I turned 25, looking crispy? I only have a half-smile because, if I’m not smiling a little, my face falls. My teeth are veneered, not false. I don’t hobble; instead I walk and run, every day, for miles: a good thing, certainly. But all I can think when I look at the photo of me is my God, how exhausting, and how desperately unhappy. How lonely, too.

I’d been dreading my 60th (Wednesday was the Big Day) from the day I turned 50. It has loomed, large and dark, like an empty grave, because I fear it will mean the death of all I’ve strived for: to be desirable, sexy, fashionable, in and certainly not out. I don’t want to be invisible. I really, really don’t want to be old. I don’t want to start saying things such as: ‘It’s warmer out than in!’

I had always imagined that, turning 60, I would suddenly look like my mum, which terrified me. Now I’ve arrived, I realise what should have worried me was not turning out like her – loved, happy, content – at all.

In the few days before my birthday, I’d hoped something might happen to fend it off: time might slow down. The world might end. It didn’t.

I’ve tried to buy into 60 being the new 40, and how liberating it will be to not feel obliged to Hollywood wax, but the truth is I know I will continue to battle to keep the years at bay. Why? Because I’m not where I should be: I’m single, not secure, not loved. I can’t relax. I have to keep trying.

My mum was born on December 23, 1919, and in the photo she is 60. She has shortish grey hair that has never been dyed. She is wearing a touch of red lipstick, and a smudge of mascara from an ancient block she had to spit on. She is wearing a home-made shift, and her head is tilted towards the sun – it would never occur to her to hide from it.

Her only concession to being on holiday is that she has removed her (much darned) stockings to expose legs that had not only never been waxed, they had never been shaved or even thought about, much.

Her toenails are not polished; she couldn’t reach her feet by this stage, as she suffered from arthritis. My dad had to help with the stockings, and place a built-up shoe on each foot. You can’t tell from the photo she had already had a hip and a knee replaced. She was in constant, excruciating pain. And yet she is smiling.

My mum had never heard of grooming, except when it applied to horses: her beauty routine extended to using Pond’s cold cream and letting any make-up ‘wear off’. She had never had a massage. She owned one handbag, one pair of shoes. She never drank water, still or fizzy, but subsisted on tea and Rich Tea biscuits.

She never ate a ready meal or drank coffee from anything other than a cup. She never had a job, other than as a dinner lady at my primary school, or a bank account. She never learned to drive. She never exercised after she got married other than endlessly hoovering and Pledging surfaces. She wouldn’t have dreamed of wasting any time on herself.

Having endured rationing, she certainly never dieted. She never owned a pair of trainers, a tracksuit, or jeans.

‘Oh,’ she would say, as we sat on that beach. ‘My arms are dreadful!’ But there was no thought she might strive to be ‘beach body ready’. It was just how she was. She knew her husband didn’t love her any less because she had aged. Unlike me, who lied on my CV about my date of birth as, even in my late 30s, I felt past it, she had no shame in the passing of time.

My mum and I are probably from the last generation to have diverged so completely. She didn’t dread her birthdays, as I do. She never mentioned the big Six-O or expected a fuss; she probably spent the evening ironing.

I wonder what she thought of her teenage daughter, as I slathered on sun screen and Parasol hair products, and performed endless sit-ups, even on that holiday. I wonder what she thought when I fell into a depression aged 25, just because I’d wasted a quarter of a century. Or when I turned 30, still on the shelf, and had a breast reduction. She must have thought me an alien indeed. She had no concept of who I was.

I got a high-paying job, which meant I didn’t have time for children, let alone a husband.

Passing 40, I panicked, lied about my age again, and hurriedly married a younger man who cheated on me. When I told my mum what he’d done, all she would say was: ‘Just be patient, darling.’ It wouldn’t have occurred to her not to forgive, not to expect a man to provide, to chauffeur her everywhere, to map-read, to book hotels and holidays, to nurse her when she could no longer walk. When, coming round from the breast surgery, I phoned my husband, he replied with a distracted: ‘Who’s this?’ It’s not just women who’ve changed; men have changed with us. As we’ve demanded less they’ve given up, retreated.

It had seemed a good idea at the time, being so very different from my mum, rebelling against her lack of vanity, ambition, selfishness.

I was born just in time to surf the wave of self-improvement. I’m ashamed to admit I looked down on my mum and her unaspirational life: the worn three-piece suites, the awful china, the even more awful clothes from Marks.

I started buying her things she didn’t want: cashmere sweaters, opera CDs, designer handbags, scent. Moisturiser, tons of it. ‘I think that ship has sailed, Dear. Don’t you?’ she’d tell me. 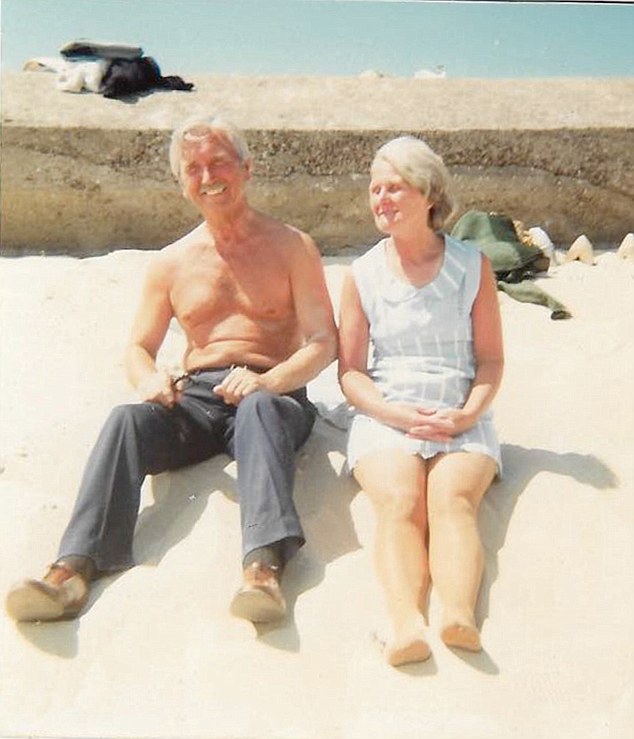 And while my mum and I are different species, mothers my age seem exactly like their daughters: they speak the same language of Topshop, Facebook, texts, box sets, boys. They go underwear shopping together; I think my mum went to her grave not knowing I wore a bra.

Perhaps seeing an image of yourself in a shiny, expectant teenage face is what keeps you sane: there’s no need to preserve yourself in aspic because ‘This is what I looked like earlier!’

I imagine, too, that having children makes you feel you’ve achieved something, so you rail less at the number of candles on the cake. And because your kids grow up, you must, too.

Perhaps my mum thought I’d get advice about love and relationships from my three older sisters, but they were too busy chasing boys to care about me, the baby of the family.

Whatever the reason, I went out into the world armed only with what I’d gleaned from my sisters’ Cosmo magazines. I looked down on the fact my mum had to ask my dad for housekeeping money; that she could no longer take a bath, as she couldn’t get in or out, and could only ‘have a good go’ with an oft-boiled flannel.

Compare again my mother’s picture with mine. My face, never exposed to the sun in case it turned me into a prune, has been surgically lifted. Cellulite pummelled. Cheeks and tramlines filled. Forehead Botoxed. Eyes lasered so I no longer need contacts. Eyebrows tattooed. I once asked my mum where her brows had gone and she said, ‘Oh, I’ve no idea!’

But most importantly, I’m not really smiling in my picture. My mum was content with her lot, she lived in the moment, she didn’t put off life, thinking: ‘As soon as I’m eight stone… As soon as I’ve bought that new house…’

Asked about the war, she would say: ‘We just got on with it.’ Imagine how women from my generation would have coped!

My overriding feeling, as the Big Day came and went last week, was that my generation of women was sold a lie. We were told our mothers’ lives were disgracefully submissive. We were told we must battle our bodies into submission, land a career in order to hold all the power.

Problem is, a great job doesn’t bend down each morning, without a murmur, and pull stockings gently over toes, as Dad did for Mum.

My mum died on August 9, 2014. She had spent more than a decade on her own after my dad passed away. She suffered some terrible times, to be sure, but at the age of 60, a snapshot in time, she was fulfilled, loved and happy.

And how am I in my snapshot? All I can see is that I spent my life clinging on to ‘things’ in the hope they would break my fall.

Instead, I’ve landed with a bump on the road to old age realising too late that time won’t be stilled, whatever the promise on the jar of unguent in my bathroom.