America, built on the dream of upward mobility, has become a country of deepening divide between rich and poor. The surest way to narrow the wealth gap is to earn a college degree. As we first reported in April, major universities including Princeton are working to lower the price of admission through a new kind of affirmative action, not based on race, but on low-income status. It began with two of America’s wealthiest parents, Bill and Melinda Gates. They spent more than a billion dollars putting low-income, minority students through college. But before they tell you what they learned, come meet some of the Gates Millennium Scholars. 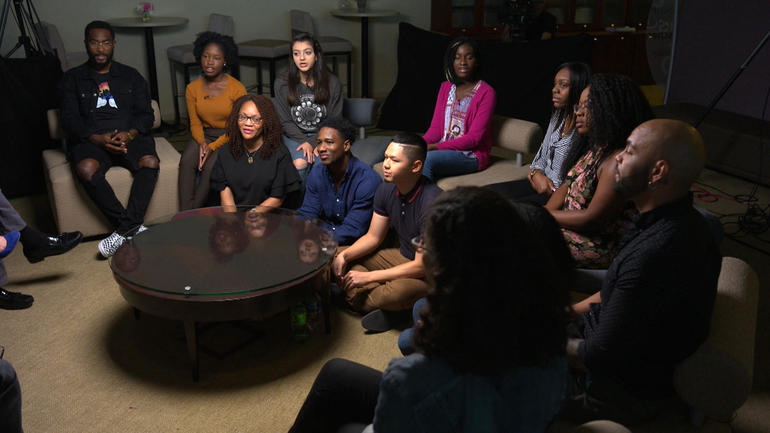 Gates Scholars from the University of Central Florida

Imagine having a couple of billionaires walk into your life and make the seemingly impossible, possible.

That’s what Bill and Melinda Gates did for these students at the University of Central Florida. They’re among 20,000 nationwide whose tuition and expenses were paid in full.

“I guess I never really dreamed of going to college. I just knew I just had to do what I could do to make sure that my family and I could survive.”

Scott Pelley: When you were notified that you’d received the scholarship, was that a letter, an email, a phone call? How did that come to you?

Daisha: Yeah. I think it was priority.

Scott Pelley: The founder of Microsoft, and you got a snail mail acceptance letter? When you got that letter, what did you think?

Daisha: My mom, she opened my mail. (Laugh) And then that’s when she broke the news to me that I got the scholarship. (Crying) I’m sorry.

Nearly 70 percent of Americans don’t have a degree and Kaira Kelly was destined to be one of them. She grew up in poverty and even today, she wastes nothing because as a child she often had only one meal a day, the free lunch at school.

Kaira: I guess I never really dreamed of going to college. I just knew I just had to do what I could do to make sure that my family and I could survive.

Scott Pelley: When you started the scholarship what were the big questions that you wanted to answer?

Bill Gates: Well one was whether a group of minority students could have very high achievement, go to the toughest universities if there was no financial constraint.

Scott Pelley: You assumed that minority students would do as well in higher education. But what you were looking for was data, hard facts?

Melinda Gates: You bet. What’s proven itself out now with the scholarship program, is you remove that barrier, they not only do as well as their white peers, no matter what zip code they’re from. They often actually do better.

The Gates program looked for good students but not necessarily the top of their class. The results have been remarkable. Nearly 90 percent of the Gates Scholars have earned a degree and that’s life-changing because, on average, graduates earn a million dollars more in their lifetimes.

Now it’s Kaira Kelly who’s doing the teaching after earning a bachelor’s and master’s degree in education with her Gates Scholarship. 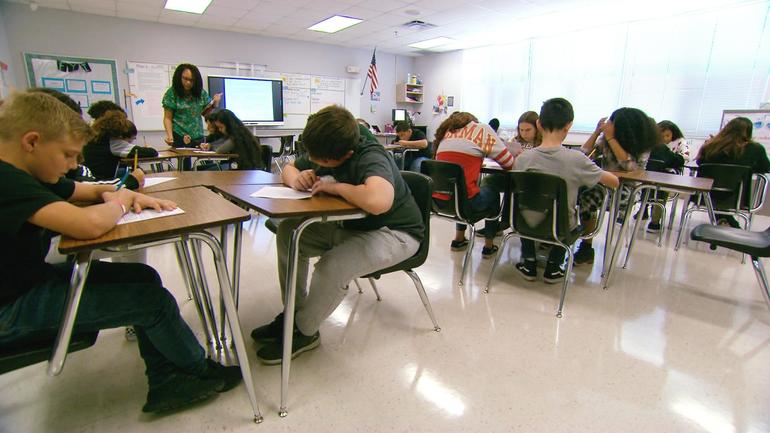 Bill Gates: Well, it’s a huge problem. We’ll have a two-class society where the richer families are able to support the scholarship and you’ll have an inner-city, mostly minority group that’s no longer going to those elite colleges and therefore a lot of the high paying professions are out of their reach. So that’s really bad at an individual level. It’s also very bad for the country and our basic founding credo of equal opportunity and our economic strength.

Bill Gates’ warning echoes on the quad of Princeton University.

Christopher Eisgruber: We have to be a place where people can come together from lots of different backgrounds.

President Christopher Eisgruber is leading the nearly 300-year-old school through a radical transformation.

Scott Pelley: You know, the 20th century activist, Upton Sinclair, described Princeton as, quote: “the most perfect school for snobbery in America.”

Christopher Eisgruber: We look back and we see those kind of quotations about us and we have been working to produce a very different Princeton. And this commitment we have to be a real leader on socioeconomic diversity is a big part of taking the next step for us and making the right kind of difference in the world.

To make his point, Eisgruber showed us yearbooks going back a hundred years.

Christopher Eisgruber: This one’s from way back in 1915. And you can see obviously we’re all male and we’re all white.

Scott Pelley: Now we have women.

Christopher Eisgruber: Now we have women.

Scott Pelley: And here’s an African-American student. But only occasionally in 1983. 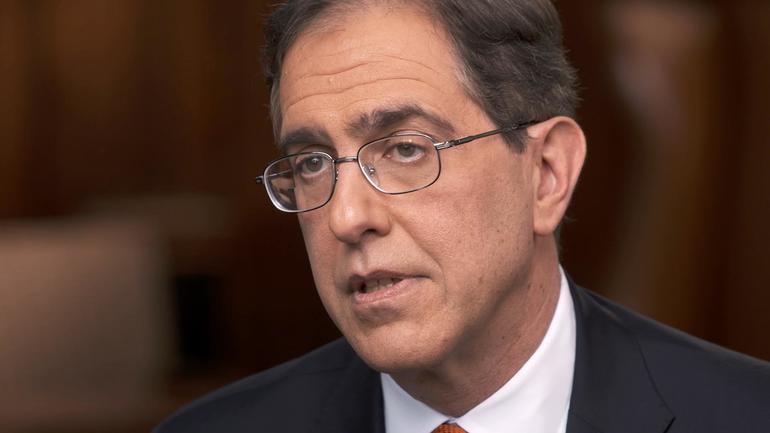 Over the next 30 years minority representation more than doubled to 40 percent. But it wasn’t enough. 60 percent of its students were still from the top ten percent income bracket. So Princeton decided to start recruiting students based on socio-economic status.

Christopher Eisgruber: We realized we had to train our readers in the admissions office to look for different things in these applications. A kid who’s working two jobs to help bring money home and achieving great grades isn’t going to have the same kind of extracurriculars as a kid from an elite private school in New York.

Scott Pelley: But if two applicants with the same test scores, the same GPA apply, are you going to prefer the first-generation, low-income student?

Christopher Eisgruber: We do think those students supply something special on this campus. So yes, we’re looking for that.

Scott Pelley: It’s a new kind of affirmative action, it sounds like?

Christopher Eisgruber: Yes. It’s a new way of making sure that we have the diversity on our campus to deliver on the kind of education that we care about and that the world needs.

Last fall we met some of Princeton’s chosen ones: Toyin, Mason, Kelton, Jackson and Jaylin are first in their family to go to college. With Chris and Tylor, they’re considered low-income. At Princeton, that means household income of less than $65,000 a year.

Scott Pelley: Be honest, how many of you stepped onto the Princeton campus for the first time and thought to yourselves, “I may not make it?” (hands raise)

Jaylin: Almost immediately. Like two seconds in, (claps) there it was.

Scott Pelley: What intimidated you?

Jaylin: And I had never been in an institution that looked so expensive and old in my life. It just seemed like everyone was so much more capable. And it made me feel very small.

But Jaylin figures she’s part of a new community – the “FLIs,” that’s short for first-generation, low-income. 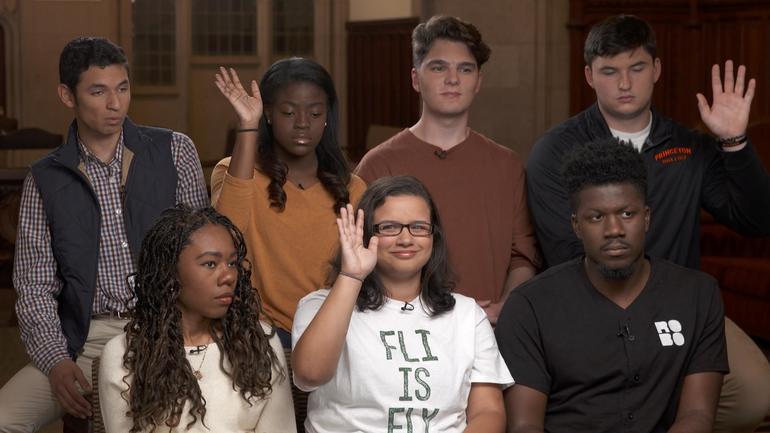 Scott Pelley: You’re sitting here wearing a “FLI is Fly” t-shirt. What does the shirt mean?

Jaylin: So, “FLI is Fly” is a campaign educating Princeton students on the resources available to first-generation low-income students. And also working to destigmatize the sort of first-generation, low-income, low-socioeconomic status.

Toyin: I feel like a lot of our peers knew from the jump how to navigate college. Their parents were like, “You need to do this. You need to do this.” And a lot of us did not have that privilege. And then it felt like they already had a leg up, and that we’re struggling to catch up.

Scott Pelley: Your student body isn’t infinite. By accepting some of these first-generation, low-income students you must be turning down some highly qualified kids, maybe kids who have Princeton in their family history?

Christopher Eisgruber: Yeah Scott, one of the things that is so tough about our admissions situation right now is we’re turning down 93 and a half percent of the kids who apply. So as we’ve taken up our low-income students, who are still underrepresented in our population, we’ve had to make other tough choices about other students.

Scott Pelley: Is this idea of bringing up the lower socioeconomic class into higher education, a movement in this country?

Christopher Eisgruber: I think it is a movement right now, at least among college and university presidents. I think there’s a recognition that in this country right now some of the divisions that we need to heal are around economic class and we need to be paying attention to that.

Among those paying attention are the presidents of some of the largest public universities. In 2013, backed by the Gates Foundation, they formed the University Innovation Alliance – headed by Michael Crow, president of Arizona State University.

Michael Crow: Within each school, what’s worked and what hasn’t worked?

Scott Pelley: How’d you do it?

Michael Crow: We did it basically by innovating our culture. We changed our culture from faculty centrism, that is we’re there for the faculty, to student centrism, we’re there for the success of the students. Now that might sound like we should have been doing that all along, but the academic culture is often built around the academic as opposed to being built around the student.

They’ve lowered tuition costs by making it easier for students to transfer from community college and by increasing online learning so students can both work and stay in school. 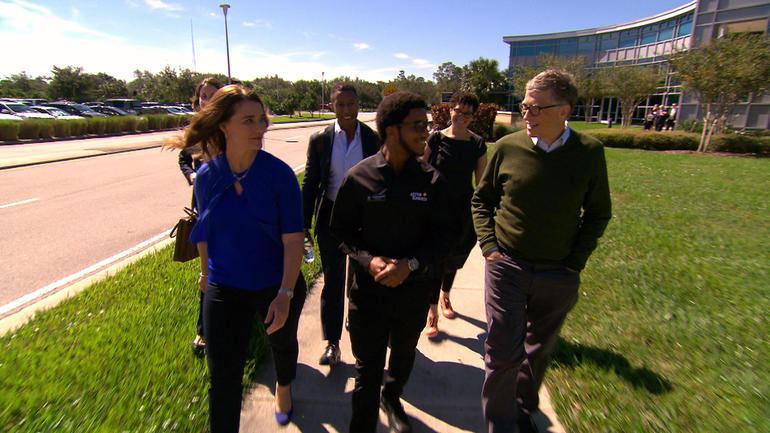 Scott Pelley: Bill, we’ve talked a lot about the needs of the students. But what are the country’s needs going forward in terms of a workforce and education?

Bill Gates: Well, the economy is constantly changing. And automation is taking away a lot of the jobs that you could do with only a high school degree. And so if you look at the current trajectory of how many kids are going to college, we’re gonna fall over 10 million jobs short of being able to fulfill the demand. Also, as we’re competing with countries, China and many others they will get ahead if their education level gets beyond ours. And so it’s great for the individual. But it’s also important for the strength of this country.

A country that, if their dreams come true, can expect from these low-income students – a future lawyer, entrepreneur, president and professor.

Scott Pelley: What do you think the class of 1970 would think of this group?

Scott Pelley: They wouldn’t be able to believe that you were at Princeton, their Princeton.

Toyin: I hope they wouldn’t think it’s their Princeton. It’s kind of like our Princeton now. Like,

Wife of Suspect in Utah Couple's Home Invasion Killing Is Arrested, as Police Search for Husband

‘Get the f–k out my building’: Cops harassed after responding to apartment fight