Spoilers ahead for Manifest Season 1, Episode 1. Manifest is about to leave you with a million questions. From the curious plane incident that kicks off the series to the supernatural elements introduced by premiere’s end, the new NBC drama has already drawn just comparisons to ABC’s Lost. And, like its predecessor, it has no shortage of mysteries, beginning with: What it the voice on Manifest suddenly following flight 828’s passengers?

For one, it’s definitely something that came from their strange flight. In the show, a seemingly normal group of people take a routine flight that lasted only a few hours — for them. When they land, it turns out the world moved on five years without them, but the plane passengers haven’t aged a day. It can’t be explained — at least not yet — but it’s only one of the puzzles still to be solved on the show.

Not only do the flight members have to make sense of what happened on what was, for them, a totally ordinary flight, but also the psychic abilities now infiltrating their minds. They can hear a voice in their head, but it’s not some stranger or power from beyond ― it’s each person’s own voice warning them of future dangers, only they’re not the ones thinking it. 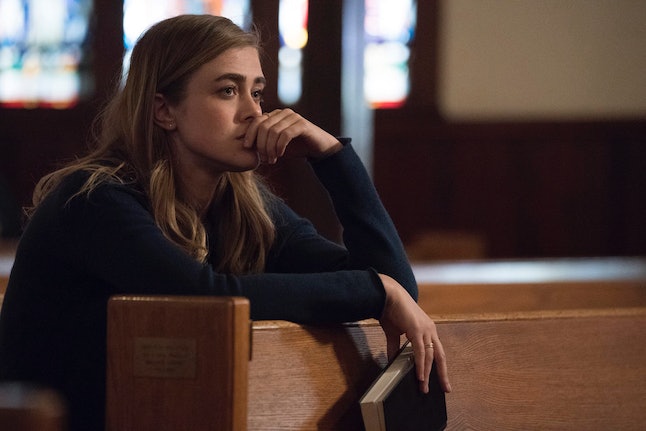 The voice is first revealed to viewers via plane passenger Michaela Beth Stone, who suddenly hears the phrase "all things" when hugging her sister-in-law post-flight. Later, she hears "slower" while riding the bus, and when she shouts at the driver to do so, he narrowly avoids hitting a child that had run into the street. After that, the voice moves on to Michaela’s brother, Ben, who was also on the flight. By the end of the episode, it becomes clear that the passengers are all bonded by this new power: Just before government agents can dismantle the plane and begin figuring out what happened, it explodes, and almost all of the 828 members are drawn there to see the whole thing unfold.

As for what the voice is — on the surface, it seems good. It helped Michaela save that child from a bus crash, as well as two girls imprisoned by a kidnapper. The "all things" that Michaela first heard seems to be a reference to a Bible verse her mother embroidered on a pillow: "All things work together for good." Perhaps now these passengers will all be instructed to work together for the betterment of their community. It’s almost as if they’ve been imbued with some sort of godly prescience. The Bible quote seems to hint that this is a plan bigger than the passengers — something designed to work toward a greater good. 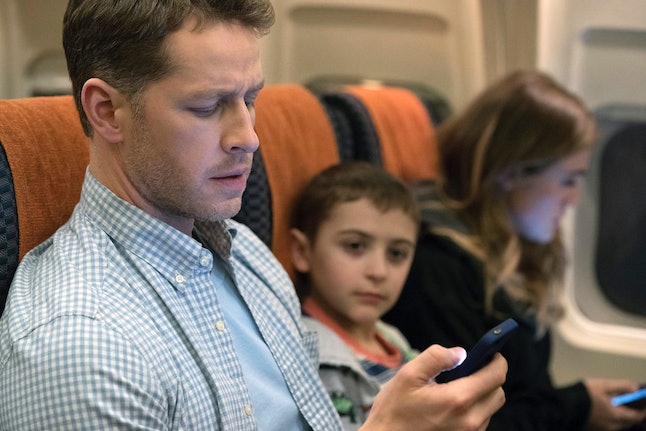 Of course, as we saw when Ben and Michaela almost got arrested after following the voice’s instructions to set the dogs free, their directives are not always clear. In the end, it wasn’t the dogs that needed saving, but the kidnapped girls on the same property. If Manifest‘s characters aren’t able to decipher exactly what the voice is telling them to do, they could quite easily land in more dangerous situations down the line.

The passengers’ powers also seem to be dependent on their proximity to those in need. Ben and Michaela only heard "set them free" after passing directly by the imprisoned girls, so it’s likely that not everyone hears the same things at the same time — unless, of course, the voice wants to call them together, as it did at with the plane’s explosion. It’s also possible that only some of the passengers are affected. Ben’s son, for example, only woke up after the plane burst into flames. Does that mean sleep impedes the voice, or that it only called certain passengers to witness the explosion? If so, why? Or were they all supposed to see the explosion, but some repressed the voice? And what happens if their newfound powers are ignored?

So far, it seems like the voice wants to use Flight 828’s passengers as a vessel for good, but if they have to break more rules or laws, bettering the world could come at a cost. It’s never as simple as suddenly being able to predict the future, and the passengers of 828 are sure to endure a lot more trouble before anyone figures out what’s going on.

I met the beefy guys on Muscle Beach in LA… watch them take me through my paces with a workout (HINT: I failed miserably)

Shop the Trendy Leith Midi Coat Under $100 for Fall