Wife is left shocked after her wealthy father-in-law sends her a £156 bill for a broken WINE GLASS (so would YOU pay?)

An angry mother-to-be has slammed her parents-in-law for demanding money after she accidentally broke one of their expensive wine glasses.

The unnamed woman took to Mumsnet to ask other parents if she should pay after her father-in-law sent her an email asking for £156 to cover the cost of a replacement.

The woman, who is expecting a child with her husband, added that she had always got on well with her ‘well off’ in-laws, leaving her even more shocked at the demand.

While most mothers reacted with shock at the request, some argued that the woman should have offered to pay for the damage. 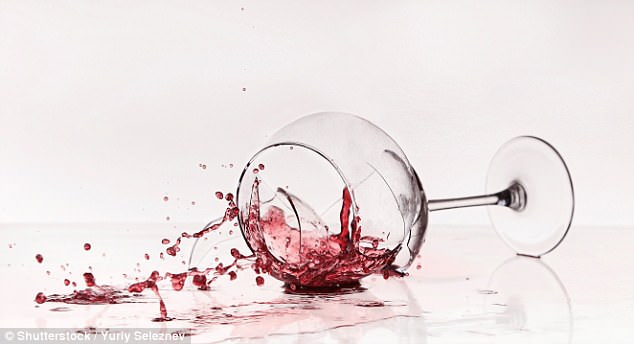 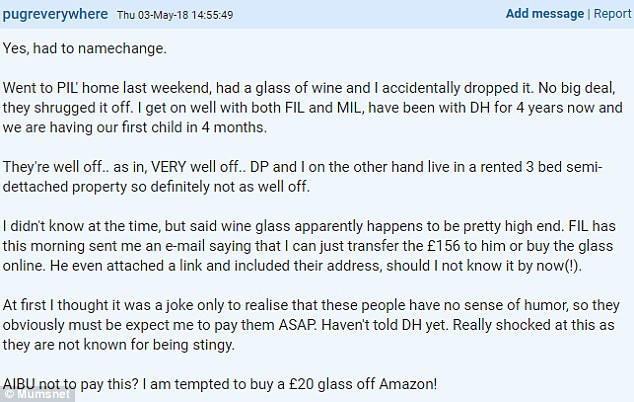 Explaining that she was five months pregnant with her husband of four years, the woman added that she had always got on well with her in-laws, leaving her even more shocked

Kicking off the lively thread, the expectant mother said: ‘Went to PIL’ (parents-in-law) home last weekend, had a glass of wine and I accidentally dropped it. No big deal, they shrugged it off.

‘I get on well with both FIL (father-in-law) and MIL (mother-in-law), have been with DH (dear husband) for 4 years now and we are having our first child in 4 months.’

Explaining her in-laws are not short of cash, she continued: ‘They’re well off.. as in, VERY well off.. DP and I on the other hand live in a rented 3 bed semi-dettached property so definitely not as well off.

‘I didn’t know at the time, but said wine glass apparently happens to be pretty high end. FIL has this morning sent me an e-mail saying that I can just transfer the £156 to him or buy the glass online…

Most parents slammed the woman’s parents-in-law, arguing they shouldn’t give guests glasses they couldn’t afford to risk losing

‘At first I thought it was a joke only to realise that these people have no sense of humor, so they obviously must be expect me to pay them ASAP. Haven’t told DH yet. Really shocked at this as they are not known for being stingy.

‘AIBU (am I being unreasonable) not to pay this? I am tempted to buy a £20 glass off Amazon!’

Agreeing with the request, one mother replied: ‘Think you should pay for the replacement if you broke it. I’d be annoyed if somebody broke such an expensive wine glass in my house.’

But most parents slammed the woman’s parents-in-law, arguing they shouldn’t give guests glasses they couldn’t afford to risk losing.

‘It’s not poor form not to offer payment. I’d never expect a guest to pay for a broken glass…much less my DIL. The richest people can be tight g**s.’

Another added: ‘If he couldn’t bear for it to be broken, he shouldn’t have given it to you to use,’ one parent argued.

One woman wrote: ‘We are not talking about the OP breaking the TV or putting her foot through the patio door, we are talking about wine glasses. If you can’t accept the risk of an accidental breakage don’t hand them them out. 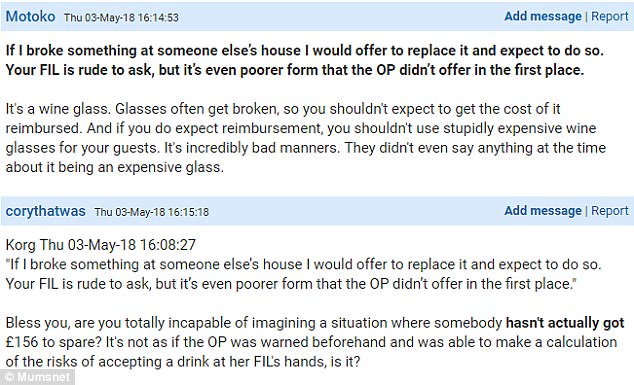 ‘To expect you to pay such a ridiculous amount for a glass is awful especially when there is a baby on the way. As if you have £156 spare for wasting.

‘What a horrible horrible man. How on earth are you ever going to be able to take your child to visit, you will live in fear of them breaking anything and receiving a bill!’

Another mother joked that she should take her own glasses in future, adding: ‘My word. Who does that? From now on I’d take my own glass when visiting… if I actually bothered to visit.’

And many mothers advised her to pass the email over to her husband, with one writing: ‘That is insane. I’d speak to DH and let him respond.’

UK heatwave could BREAK your iPhone: Everything Apple says your phone can’t do in the heat

Amber Ruffin Joins Creative Team of ‘Some Like It Hot’ (EXCLUSIVE)