A John Lewis customer claims she has been left with a fridge in the middle of her living room for six weeks because the retailer has failed to collect it.

Lauren Williamson ordered the large £2,000 American-style fridge for her Edinburgh home in June, only to discover on delivery that it was too big for her kitchen.

She ordered a second fridge from the High Street giant but was left distraught when the delivery team failed to remove the first appliance.

In a series of angry social media posts tagged #fridgegate, Lauren explained there was a second failed collection and that she has been left £2,000 out of pocket because she cannot receive a refund until the original fridge has been returned. 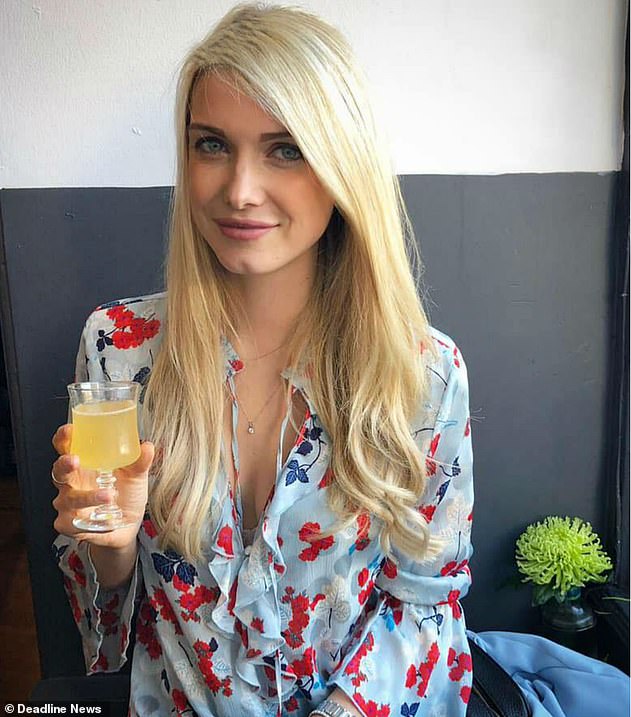 Lauren Williamson, pictured, ordered the large £2,000 American-style fridge for her Edinburgh home in June, only to discover on delivery that it was too big for her kitchen 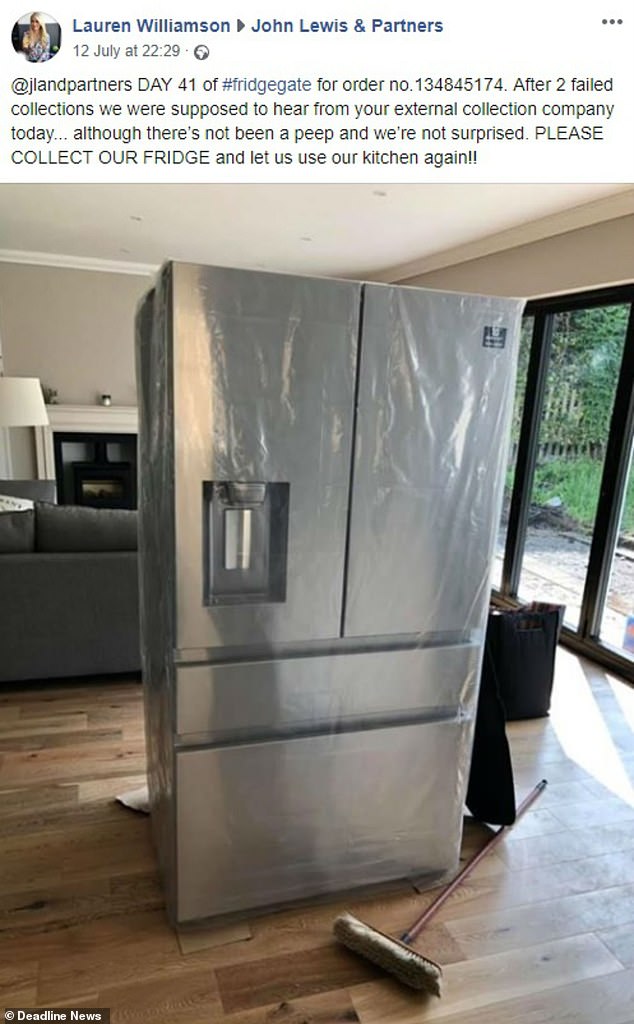 Lauren has been taking to Facebook with her complaints over #Fridgegate,  revealing she has been left with the huge fridge in the middle of her home for over six weeks, pictured

She has now had a fridge in the middle of her living room for 45 days.

Speaking about the ordeal today, she said: ‘We’re completely shocked that John Lewis would leave us in such an awful situation.

‘We’re £2000 out of pocket and they’ve been so incompetent sending people who aren’t able to collect the fridge to collect it twice.

‘We just want our savings back, and to be able to use our kitchen again.’

She continued: ‘When the new fridge arrived, the delivery team told us they couldn’t collect the old one even though we were promised that they would. 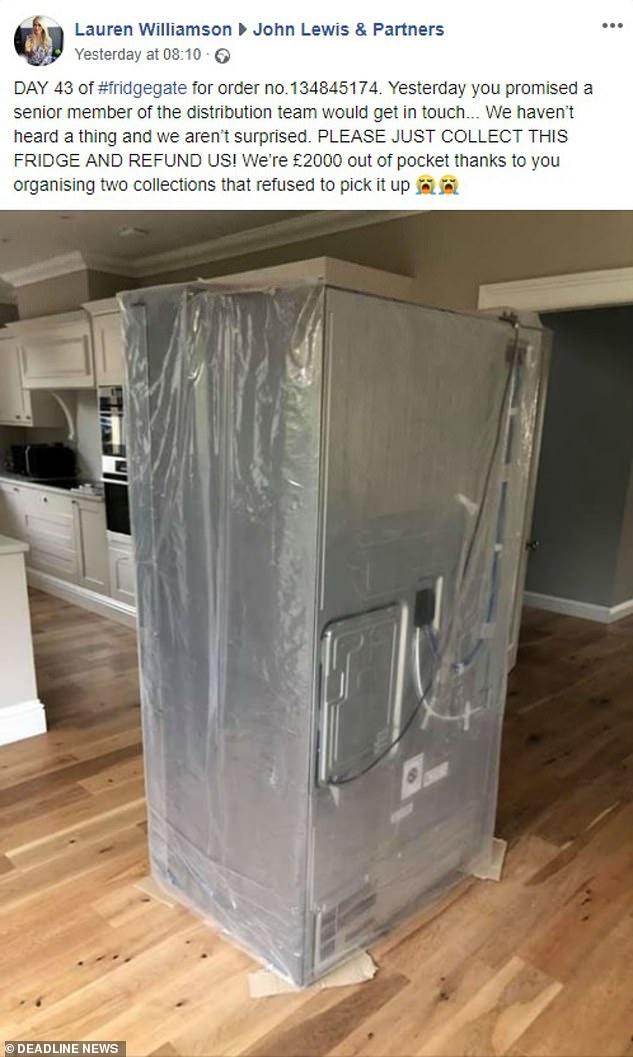 Lauren admitted she’d been ‘completely shocked’ by John Lewis, who won’t offer her the £2,000 refund until they collect the fridge 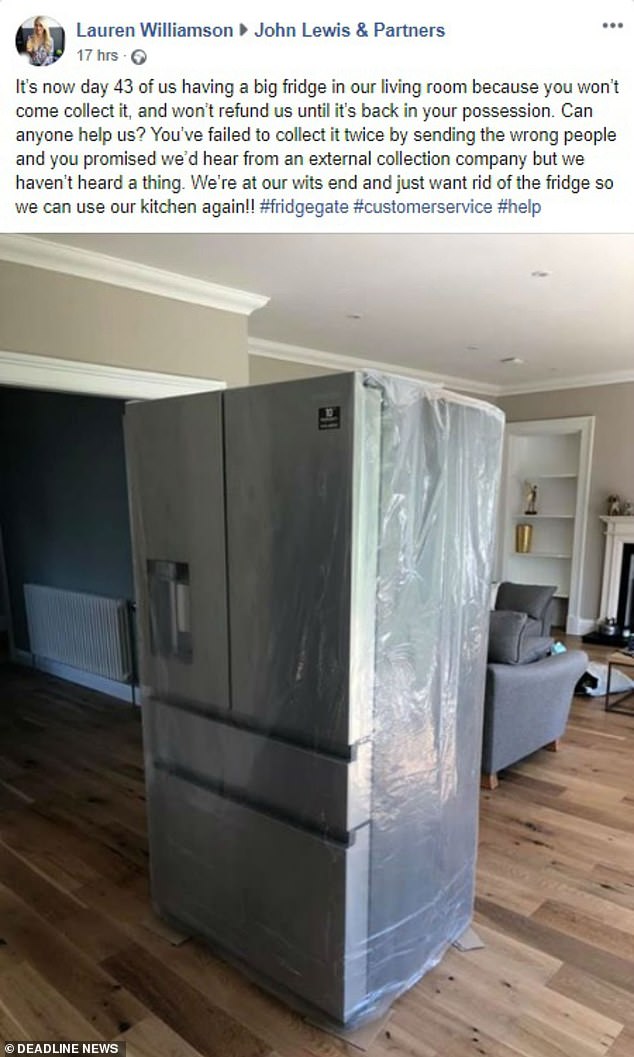 Lauren revealed she was ‘at her wits end’ over the enormous product, and said it had become ‘a complete nightmare’. She has shared her ordeal on social media

‘John Lewis organised another collection but when they came they were the wrong team and couldn’t pick up an American fridge in the size of their van.’

‘We haven’t been able to use our kitchen in 45 days due to firstly having no fridge and then secondly having a giant fridge taking up all the space. You couldn’t make it up, it’s such a nightmare.’

Lauren has been attempting to put the retailer under pressure by posting on Facebook.

‘Please collect our fridge and let us use our kitchen,’ she wrote in one public post on the John Lewis & Partners Facebook page. 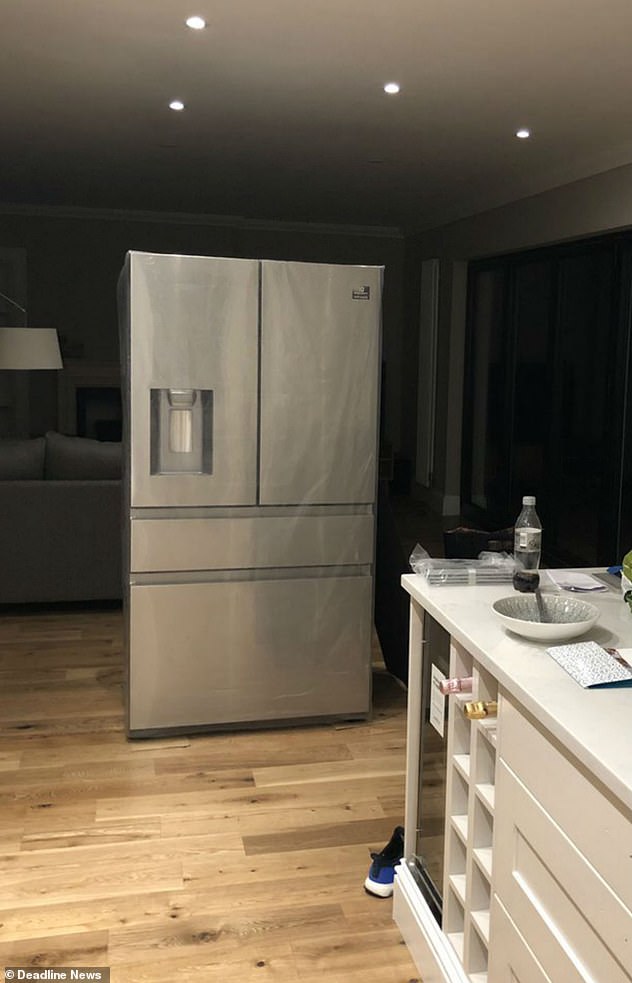 John Lewis have twice tried to collect the huge fridge, but Lauren said both collection teams were unable to take it. Pictured, the fridge in the middle of Lauren’s living space

Sharing another photo of the fridge in the middle of her house, she posted: ‘ Can anyone help us? You’ve failed to collect it twice by sending the wrong people and you promised we’d hear from an external collection company but we haven’t heard a thing.

‘We’re at our wits end and just want rid of the fridge so we can use our kitchen again.’

Social media user Seona MacMillan reacted to one of Lauren’s posts by commenting: ‘Shocking! I would be demented.’

John Lewis said in a statement: ‘We are very sorry about the delay in collecting Ms Williamson’s fridge.

‘We have arranged for the fridge to be collected as soon as possible. We have apologised and will offer a gesture of goodwill for the inconvenience caused.’

FEMAIL tries out the warmest shoes on the market