The XPT Sydney-Melbourne passenger train that derailed in February, killing two people, was travelling at more than six times the speed limit when it entered a loop track at Wallan, the rail safety watchdog has found.

A preliminary report into the derailment found the train was travelling over 100km/h on the main line when it entered a passing loop in Wallan that had a 15km/h speed limit. 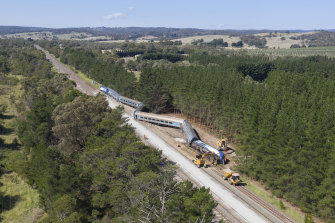 An aerial view of the XPT train that derailed at Wallan North in February.

Well-placed sources have told The Age that pages of written instructions about the diversion were in the train driver's cab when the derailment occurred.

The diversion was at odds with instructions drivers had received over the weeks leading up to the crash, which were to continue travelling at line speed along the main line. This was in place following a signal hut fire.

Chocolate that's 99% carbon free… but costs you a packet!