Home » Lifestyle » Your Zodiac Sign Can Reveal What You Should Drink At Happy Hour, According To A New Book

Your horoscope can drop hints about the direction the emotional, financial, or professional aspects of your life are taking, but about when you leave work and hit happy hour with your friends? According to astrologer Aliza Kelly Faragher, your zodiac sign plays a role there, too, and her new book, The Mixology of Astrology shows you how.

“I tried to compile the essence of what each sign would want in a cocktail for the book,” Faragher tells Bustle. “There’s so much that can be extracted through the lens of astrology.”

Faragher argues that you can align your choice of cocktail with your sun sign, all based on the personality traits imbued to you by the stars. Take the perfectionist Virgo, for instance. If you were born under the sign of the maiden, you’ll likely prefer straightforward, simple beverages like the 7&7, a combination of Seagrams and Sprite, or the gin Gimlet, which consists of gin, lime juice, and soda. Meanwhile, the sensory Taurus, who has a gourmand’s spirit, will probably avoid cheap or low quality liquors, and instead gravitate toward drinks with a foodie element like the Bacontini (that’s just a regular martini, but made with bacon-infused vodka). The element — fire, earth, water, and air — you’re born under matters, too: Earth signs (Virgo, Capicorn, and Taurus) won’t appreciate excessive garnishes, like a superfluous slice of orange, on their cocktails, while water signs (Cancer, Scorpio, Pisces) prefer the strongest drinks on the menu, like the Mind Eraser, which combines vodka and coffee liquor. 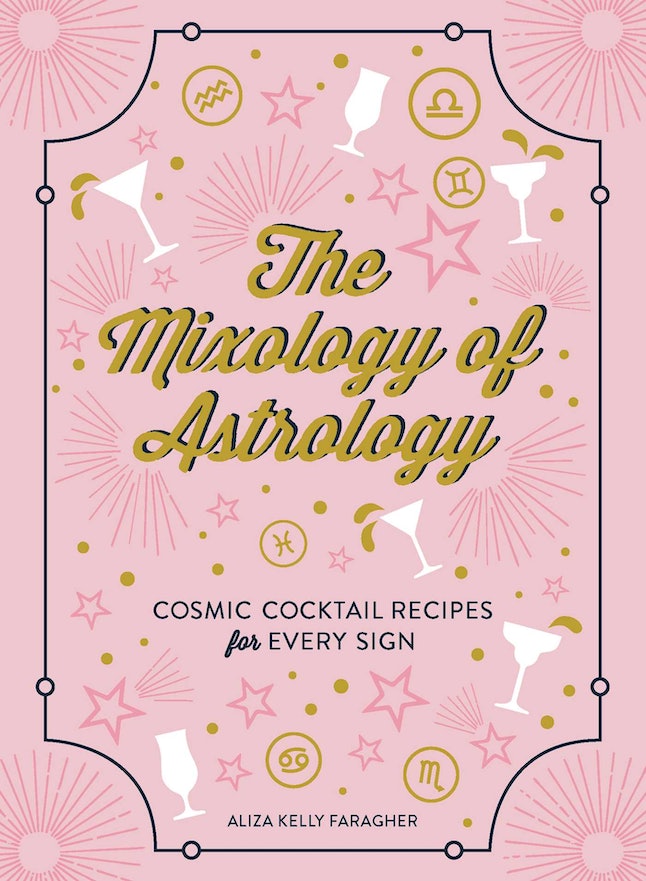 The Mixology of Astrology: Cosmic Cocktail Recipes for Every Sign by Aliza Kelly Faragher, $15.99, Amazon

However, the zodiac can do more than provide guidance on what cocktail to order off the menu; it can also give you insight into what type of drinker you are. Are you more likely to shut down the bar and head to the after party? Or quietly sip on the same artisanal cocktail all night long? Depends on your sign, according to Faragher.

“Aries, as a fire sign, is impulsive and spontaneous and loves to stir the pot, so they want drinks that other signs might not be able to handle,” Faragher tells Bustle. “Virgo will be a bit less party-centric than Aries or Gemini, who are more likely to get the party going.”

Faragher’s book doesn’t just give vague advice on what the different signs might want to drink; she actually provides 16 cocktail recipes for every zodiac sign: Each of these sections not only outlines their strongest personality traits, but also reveals what the signs should avoid. For instance, “you should never serve a Leo a carelessly thrown together concoction,” while a Sagittarius probably won’t be happy with a “simple mixed drink.” Remember, none of these are hard and fast rules that you should take as gospel — more like strong recommendations.

In fact, you might be asking yourself why you should even consider astrology when ordering a drink. Sure, it can be helpful when you’re trying to decide if you should quit your job, or download that dating app you delete every couple months. Can it really apply to the more minute aspects of life? Why not just order the vodka soda and get on with your night? Well, your horoscope is meant serve as a guide, not a directive, and that guidance is only meant to strengthen your relationship to your psyche.

“I very adamantly believe that astrology helps people understand themselves in a deeper way and then feel more comfortable in their own skin,” Faragher says. “It’s about living your best and truest life.”

So yes, Aries, go ahead and keep ordering the vodka soda (this sign usually isn’t inclined to sip on conventional cocktails), but trying the spicy jalapeño margarita might unleash your fiery side, or at the very least teach you to indulge an aspect of your personality that you might be prone to ignoring or suppressing. There shouldn’t be any shame in expressing your authentic self.

“I think that one of the beauties of astrology is that people can understand themselves from a different perspective,” Faragher says. “For instance, Scorpios are intense. There’s no reason to apologize for it.”

Ultimately, Faragher hopes to make astrology accessible to people in their everyday lives. Her book is about having fun, not dramatically changing your drinking habits to match her advice. Most of all, she hopes that practitioners, however serious or casual, use astrology as a way to be more compassionate to each other.

“I used cocktails as the primary vocabulary of this book, but the message is so much greater in terms of embracing individuality and recognizing that astrology can be a lesson in empathy,” she says, “both finding empathy for others — even if that means excusing their drink orders from time to time — and ultimately finding empathy for yourself.”