For years, Ahmed Shrif managed delis for other people. Now he has his own business, a corner store called Chippendale Scoop he purchased from the Greek family that had long operated the bodega near Sydney’s Redfern station.

One of his first moves was putting the store’s small but tasty selection of hot and cold takeaway food online through delivery providers DoorDash and Menulog.

It has done quite well, but there aren’t as many orders as Shrif, who is also dealing with the loss of custom from the students that normally parade from the station to the University of Sydney nearby, would like. 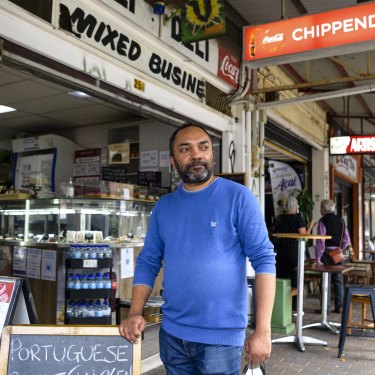 Like thousands of other business owners, Ahmed Shrif is trying to bring his corner store into the 21st century. But with instant online grocery stores arriving, he has new competition.Credit:Rhett Wyman

So his next move will be to make the rest of the store’s range, from ice cream to fruit, pet food to toothpaste, available online. “There are lots of people who don’t want to go to the shopping centre, so they come here,” Shrif says. “But it’s more convenient online maybe.”

In a way, Shrif will join a gold rush that has led to a flurry of Australian startups vying to become the country’s next billion-dollar company, all promising to deliver grocery essentials at retail prices within 10 or 15 minutes.

Milkrun, Voly and Send (which all stylise their names with block capital letters in an apparent consensus on Millennial tastes) are the three most advanced new players, all launched last year. 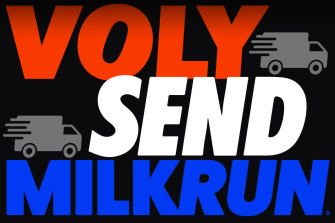 With brands catering to millennial tastes, Milkrun, Voly and Send are all hoping to build a cult like following of early adopters before branching out.Credit:Composite: Monique Westerman

The playbook, tried and tested overseas by companies such as Germany’s Gorillas — the fastest firm in its country to reach a $1 billion valuation — is to set up a network of “dark stores” in inner-city locations that hold supermarket goods but are inaccessible to the public.

Riders on electric bikes then zoom from the stores to customers’ homes when orders come in through a smartphone app. It’s not just fruit, milk and canned goods either. Users can order tampons, condoms and RATs — at least when they’re in stock.

So far, Voly and Milkrun are only in Sydney while Send has also launched in Melbourne, but the firms will not be constrained to those cities for long.

And in a departure from the last wave of delivery companies such as Uber Eats, Deliveroo and DoorDash, the newcomers are employing their staff directly, meaning they have a minimum wage, workers’ compensation and superannuation payments among other benefits. They also only use their own facilities, rather than partnering with major supermarkets or corner stores.

The prize is a share of the $100 billion Australians spend every year on supermarket items but the newcomers will have to contend with the giants of the sector: Coles and Woolworths.

Then there are the convenience chains like 7-Eleven and independent grocers such as IGA and, far further down the scale, people like Shrif, who still knows many of his customers by name.

So far, the service from the new apps is very good. 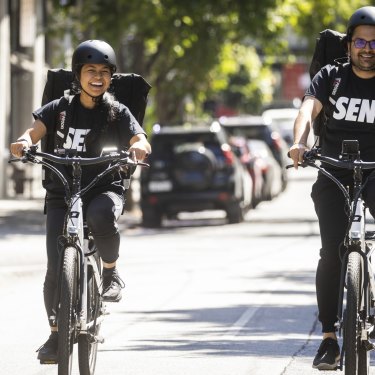 The Sydney Morning Herald and The Age ordered a single apricot from Voly for $1.70, with no delivery fee, at 9.29pm on a Thursday night in mid-December. It arrived at 9.37pm with a hand-drawn card of a smiling, anthropomorphic avocado ($?), a real free avocado (approximately $1), and a packet of Green & Black’s chocolate (about $4.25).

The delivery, of course, lost money for Voly. Indeed, as startups, none of the three are profitable and available measures of their scale are limited. Voly says it serves 42 suburbs in Sydney, Milkrun 34, and Send says 46 across Sydney and Melbourne.

Voly co-founder Mark Heath is open about the company’s strategy. “The reality is the industry as a whole is focusing on growth more than it is profitability,” he says. “But Australia, in particular, as a market is one in which that path to profitability is incredibly clear.”

He has a few things in mind: encouraging customers to buy more items per order, defraying the delivery cost over more goods; negotiating better deals with suppliers as the company grows; and tailoring each dark stores’ goods to its small local area.

By holding only a few thousand different items sourced from wholesalers and merchants, the companies aim to be able to pivot quickly.

(Encouraging customers to buy more goods per order could be tricky for Voly and its rivals because their lack of a minimum order size and quick speeds are part of what differentiates them from the established delivery services operated by Woolworths and Coles.)

One thing Voly’s founders say it will not do is jack up its prices. “That’s definitely not part of our plan,” says the company’s other founder, Thibault Henry. “And the reason why this model will work is stickiness. If you sell at retail price, people just come back.” 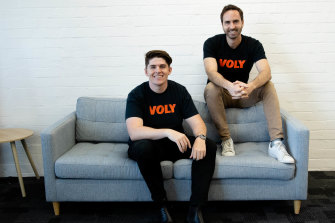 Mark Heath (left) and Thibault Henry, the co-founders of Voly, say they want to keep prices in line with retail stores.Credit:Janie Barrett

Milkrun, which charged $2.99 for a sample delivery, is seen by some as the market leader because of its rumoured fundraising prowess and high-profile founder Dany Milham, who was also behind the Koala mattress brand.

Milham sees his company as eventually among the largest in the country, perhaps a $10 billion business. It’s evident in his description of the company’s branding.

“We chose the blue, the very strong Milkrun blue, because Woolies is green and Coles is red and we have to be able to stand out,” Milham told The Sydney Morning Herald and The Age in his first interview since founding the company.

Milham is aiming high, building a legion of customers that will come back to Milkrun again and again as it expands into a burgeoning range of products and services far beyond supermarket goods. “We could sell them anything,” he says.

Milham’s rejoinder to the critics who see Milkrun and the other players as corner store rivals with an expensive delivery network is that they are only seeing part of the picture.

He envisions Facebook groups to let users have input on products, such as Jewish users recommending good Kosher foods, and a Discord online forum for the most dedicated users. If Milham can make it a reality — and Milkrun’s social media feeds already show enthused customers — it would be a far cry from Australians’ relationship with the supermarket majors, which already take advantage of their customer base to offer everything from insurance to credit cards.

Others familiar with the industry, but who spoke on condition of anonymity, are deeply unconvinced.

They see a business model that has to rent stores in expensive suburbs because they tend to be full of dense housing and well-off customers but charges no or minor delivery fees, and uses none of the same labour cost savings that companies such as Uber benefit from.

University of Western Australia senior lecturer Caleb Goods, an expert on the gig economy, says: “Often when these platforms start up they’re trying to gain market share, they price the deliveries quite low, they pay workers a reasonable hourly rate.”

But “there are questions about the financial sustainability of Uber Eats and Deliveroo and they’re using a very different non-employment model”.

In the sceptics’ view, the instant grocery apps will go one of two ways: sell out to an established player keen to enter a new market segment and benefit from its brand and customers or gradually raise prices, especially if some of the other players bow out.

Already, German multinational food delivery company Delivery Hero is one of the largest investors in Gorillas. Major retailers, such as Woolworths, Coles, and 7-Eleven, all declined to comment.

Rob Adams, the founder of Send, insists his business can be profitable long term, looking to overseas progenitors that have already reached markers of sustainability and Australians’ high grocery expenditure compared to other countries.

With the use of delivery apps skyrocketing during the pandemic, Adams is bullish on the sector’s future. “I think we’re seeing a profound shift away from the conventional sort of big weekly shop behaviour over to a more frequent, small shopping format of rapid grocery delivery,” he says.

But for Send, Milkrun and Voly to be successful an enormous amount of venture capital cash will be required.

“So the cap raising environment for this business is a super intensive one,” says Send’s Adams. “Already a considerable amount of capital has been poured into the space, and I’d imagine hundreds of millions of dollars will be poured into the Australian rapid grocery delivery market over the coming years.”

Voly’s latest capital raising round saw it take in seed funding of $18 million, led by the Indian arm of Sequoia Capital, one of the oldest and most storied Silicon Valley venture capital funds, while Send’s latest round was $4 million. Milkrun did not disclose how much it had raised.

Another key piece of potential profit for these apps is selling so-called ‘sin goods’.

The Voly document describes adding alcohol and cigarettes to its store as a “quick win” and the appeal, both for users and the company, is evident.

But the health questions of adding such items are obvious.

In response to written questions, a Voly spokeswoman confirmed the company planned to add a “range of products over time” but said it wouldn’t be rushed and would come with tech and processes to ensure customers’ safety.

Safety more broadly has been a problem for the gig economy delivery companies, which saw their brands battered when five riders (who were contractors rather than employees and consequently paid per delivery rather than by the hour) were killed in two months in late 2020. There have been improvements since.

Transport Workers Union secretary Michael Kaine, a critic of the independent contractor model, said: “We welcome these newer companies directly engaging their riders, rather than taking the low-road of forcing workers into precarious and insecure arrangements with no rights.

“But the reality is that without blanket minimum standards applying across the industry for all workers, we risk continuing the same cycle of pressure and abuse which makes food delivery so deadly.”

Uber has long defended its contractor model, pointing out that its riders enjoy the flexibility of setting their own hours. A spokeswoman did not comment on the newcomers but said Uber Eats was helping businesses from national retailers to local fishmongers get online and deliver goods to help them grow.

Whether that model, which serves the likes of Shrif’s Chippendale Scoop, or the dark stores of Milkrun, Send and Voly ultimately triumphs is a multibillion-dollar question, and one that will have profound consequences for that most local institution: the corner store.