Tel Aviv: Israeli researchers have printed a 3D heart using a patient's own cells, something they say could be used to patch diseased hearts, and possibly in full transplants.

The heart that the Tel Aviv University team printed in about three hours is too small for humans – about 2.5 centimetres, or the size of a rabbit's heart. 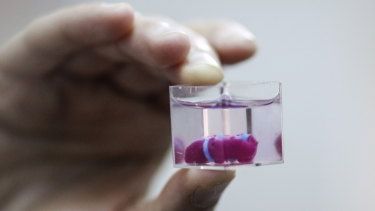 A researcher holds a 3D-printed prototype of a human heart at Tel-Aviv University.Credit:EPA

But it is the first to be printed with all blood vessels, ventricles and chambers, using the cells and an "ink" made from the patient's own biological materials.

"It's completely biocompatible and matches the patient," said Tal Dvir, the professor who directed the project, adding that reduced the chances of rejection inside the body.

Researchers took fatty tissue from a patient, then separated it into cellular and non-cellular components. The cells were then "reprogrammed" to become stem cells, which turned into heart cells. The non-cellular materials were turned into a gel that served as the bio-ink for printing, Dvir said.

Previously, only simple tissues – without the blood vessels they need to live and function – had been printed, according to a press release from the university. The breakthrough was reported in a paper in Advanced Science on Monday. 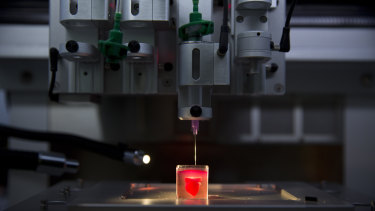 A 3D printer prints a heart with human tissue at the University of Tel Aviv,Credit:AP

"Patients will no longer have to wait for transplants or take medications to prevent their rejection," the press release said.

"Instead, the needed organs will be printed, fully personalised for every patient."

In a room off a warren of laboratories, a massive 3D printer sent a thin stream of "bio-ink" into a small square container. Inside sat a small heart the size and colour of several pencil erasers.

The cells need to mature for another month or so and then should be able to beat and contract, Dvir said. The printed hearts could be tested on animals but there's no timetable for testing hearts on humans, he said.

A human-sized heart might take a whole day to print and would require billions of cells, compared with the millions used to print these mini-hearts, Dvir said.

It's not clear that a printer can produce hearts that are superior to human ones, he said, adding: "Perhaps by printing patches we can improve or take out diseased areas in the heart and replace them with something that works [perfectly]."