The proliferation of smart speakers and compact, portable Bluetooth units has been brilliant for giving people numerous and better ways to consume digital music. But it's also meant that buying a pair of speakers that physically plug into something, and that aren't designed for Bluetooth, Wi-Fi or voice assistants, has become increasingly difficult.

Your options typically are to go very cheap, very expensive, or just find a Bluetooth speaker that also has a line-in. But none of these are great if you need a pair of good, inexpensive speakers to go on your shelf for music, movies or games.

However ideal speakers for these kind of scenarios do exist, such as Edifier's R1280T. In a small bedroom or office, or on the desktop in front of you, I found this $129 set nicer to listen to than some wireless speakers at double the price. 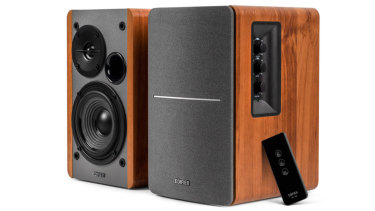 These speakers are powered, meaning they have an amplifier built in and can connect directly to a source like a TV, computer, phone or a pre-amped turntable. They comprise a 4-inch bass unit and a 13mm tweeter, giving crisp highs and great mids. Bass is quite good too at all but the highest volume levels, though obviously doesn't compare to a dedicated sub.

There are volume, bass and treble knobs on the enclosure of the right speaker, and to be honest I forgot how nice it was to set something up without using an app or waiting to connect to a hotspot. There is a wireless IR remote included for volume as well. 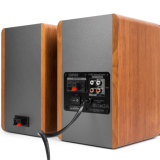 The speakers have two sets of RCA inputs, which is a very handy feature.

The left speaker connects via standard speaker wire (there's some included), and I was pleased to find that volume levels appeared very well balanced between the two, despite only one of them being plugged into the wall.

Another potential annoyance Edifier has side-stepped here is that you won't find yourself constantly plugging and unplugging devices from the R1280T, thanks to the two sets of RCA inputs. So for example you could keep both your TV and turntable permanently connected to the speakers, or you could leave cables from one of the inputs loose so you can connect a phone without unplugging your computer.

Both inputs are active at once, so you don't have to worry about switching. There's a standard stereo RCA cable and an RCA-to-3.5mm cable included.

Aesthetically these look a lot better than the bulk of black wood boxes you mind on the market. The woodgrain finish and grey covers are going for a classic look, but I found them a little bit dated. You can remove the covers to expose the drivers which, at the risk of inviting dust, I thought looked better.

For those that need speakers to go into an amplifier or home theatre receiver, the Chinese manufacturer also makes a passive version for the same price called the P12. Meanwhile step-up models, the active R1700BT and passive P17, go for $179. 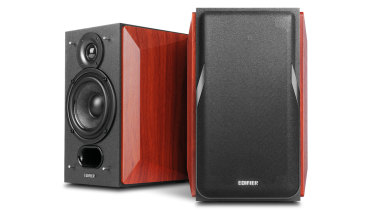 The P17 is a set of passive speakers that look and sound great, even if they don’t pack enough punch to fill a large room.

I tested the P17 with music, movies and video games attached to a Sonos Amp in my spare room. It sounded excellent at close range but, even though the tweeters are bigger at 19mm, I would still suggest these are best for small rooms and desktops rather than for driving your loungeroom. Another use could be as rear surround speakers, and the passive units have wall mount brackets on the back just for that purpose.

The P17 look much nicer than the less expensive models, with a glossy red woodgrain finish and an angled enclosure Edifier claims reduces cabinet resonance. These too come with all the speaker wire you'll need.

The 17 Best Hiking Boots and Sneakers for Hitting the Trail