Pulling obvious influence from a very popular and similarly-named cartoon series, The Adventure Pals stands on its own strengths as a fun, whimsical platformer for the whole family, even if it's a bit less complex than you might expect at first.

Your pop has been kidnapped and it's up to you to rescue him, but in a world where a rotating giraffe tongue can generate enough lift to let you hover through the air, and a bad guy has a nefarious plan to turn all old people into angry hot dogs for some reason, that's not really as dire as it sounds. 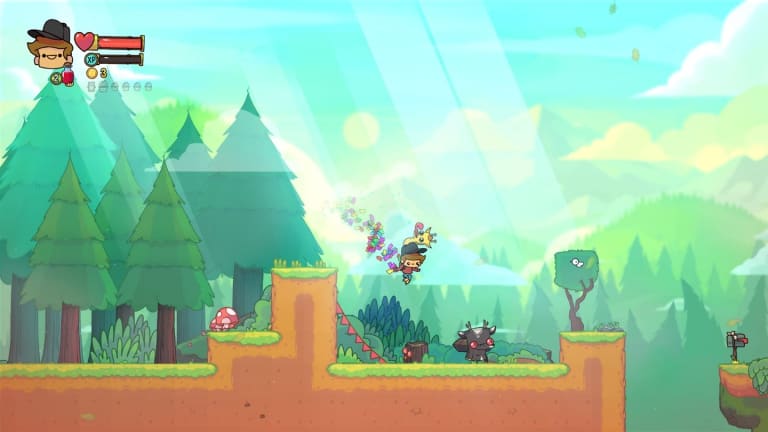 Sparkles the giraffe whirling his tongue madly to slow your descent is never not disturbing.

Whether you're locating a farmer's lost wife or settling a dispute between dinosaurs and sentient toasts, there's always some weird non sequitur driving your progress through Adventure Pals and, while not every joke lands, there are some truly giggle-worthy lines and concepts as you explore the world and towns.

Whenever you get a quest it's time to jump into a set of five fairly simple platforming stages that you, your giraffe and your pet rock must get through. New enemies and fresh platforming mechanics keep you on your toes, whether it's a bad guy that poops land mines or toasters that launch you vertically, but I was a tad disappointed with the lack of real progression here. 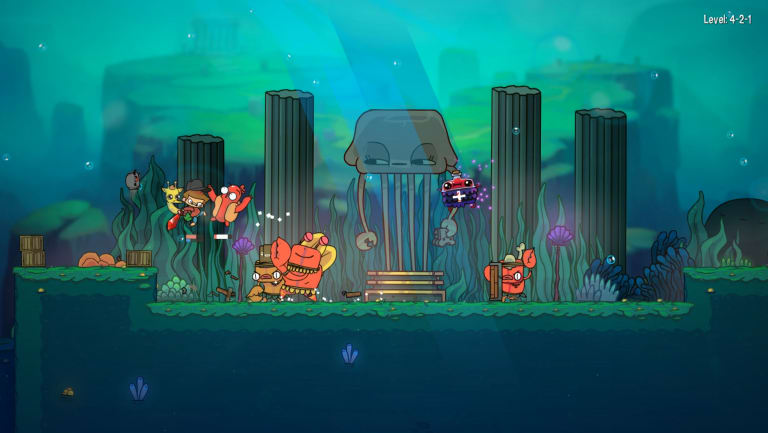 In general you'll be running, jumping, climbing and whacking enemies with a sword in much the same way over the whole ten hours or so. The challenge is minimal, puzzles are very straightforward and combat is essentially a matter of mashing a single button, but the flowing movement, crazy visuals and funny animation makes for an enjoyable ride.

There are a few nice touches to keep things interesting as you run through the stages. For example you can scour every inch of each level to find the hidden cupcakes and sticker packs. The former can be fed to an egg-laying cat in town to unlock new hats while the latter, obviously, fills your sticker book with stickers.

As you bash enemies you'll also gain experience points and eventually level up, at which point you'll be able to select a new perk that makes you deadlier in battle. Like the rest of the game it's a system that feels incredibly random, but it's fun to keep stacking ridiculous combat abilities on top of each other until you're a confetti-fuelled death ball.

There's an option to play Adventure Pals with two players, which makes it a great game for sharing with kids and friends, and while this is overall a very uncomplicated game there's certainly plenty of off-beat charm and family-friendly humour to keep you entertained.

The Adventure Pals is out now for Switch (reviewed), PC, PS4 and Xbox One.

Jersey Shore Packs So Much Drama Into Such a Short Trailer