A smart speaker which can both show and tell thanks to a built-in touchscreen, the Echo Spot opens up a new front in Amazon's smart home war with Google and Apple.

On sale today, the $199 Echo Spot joins the $149 Echo, $79 Echo Dot and $229 Echo Plus as the latest edition to Amazon's smart speaker family in Australia. It's the first to feature a built-in screen, looking like a cross between an alarm clock and a magic 8-ball. 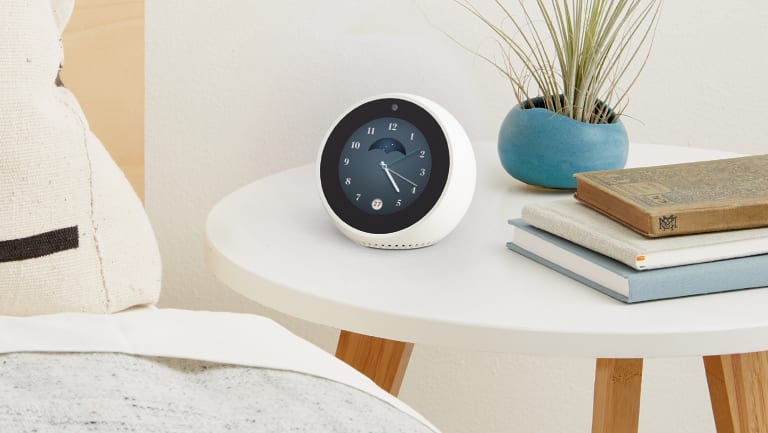 The Echo Spot has a small touchscreen to show you answers and information.

The Spot's sound quality surpasses the woeful Dot but still falls short of the standard Echo, meaning that it's not designed to fill a room with music.

Instead the Spot will likely find a home on the kitchen bench, bedside table or bathroom sink.

The tiny speaker is easily tucked away in the corner thanks to its compact 8-cm footprint, although Amazon won't win any friends with the bulky AC adaptor which blocks adjacent power points.

As with any Amazon smart speaker, the Spot brings the talkative Alexa smart assistant to life so you can ask her a wide range of queries. She can also play music and internet radio stations, set alarms and timers, check your calendar, control smart home gear, order takeaway food, call an Uber and much more. 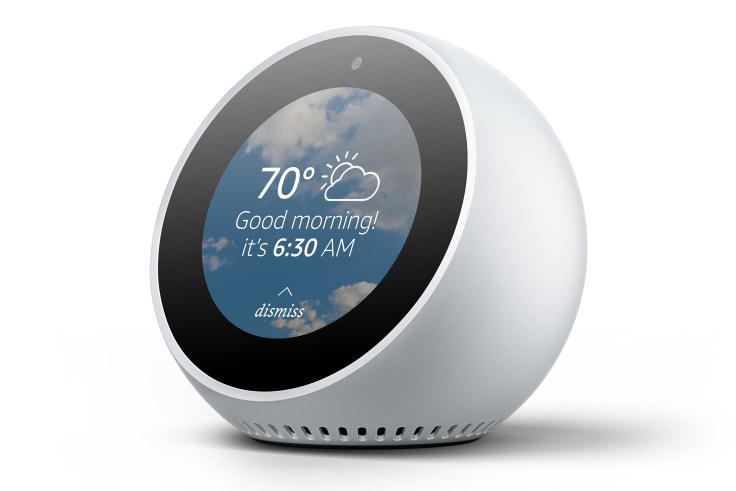 The onscreen experience isn't always as slick as you might hope. Ask for a recipe from Taste and Alexa shows the list of ingredients on screen but doesn't automatically scroll down as she reads it aloud. This list stays on the screen while she talks you through the recipe, rather than showing each step.

Unfortunately, unlike Google Assistant, Alexa still can't recognise different voices in Australia. This means when other members of your household speak to Alexa they're accessing your calendar and personal music library.

The Spot can also act as a digital photo frame, scrolling images stored in your Amazon account. Beyond this you can watch video news clips or tap into the Amazon Prime Video library if you have a subscription. The screen’s colours, contrast, detail and viewing angles are surprisingly good but you obviously wouldn't want to watch your favourite shows on such a tiny display when you probably have a larger smartphone screen in your pocket.

By default the screen displays a customisable clock face, reinforcing the idea that the Spot might best be put to use as a smart bedside alarm clock; like a throwback to the old Chumby which was superseded by the smartphone.

You can ask Alexa to set one-off or recurring alarms, then use voice commands or the touchscreen to cancel or snooze the alarm in the morning. Aside from a normal alarm, the Spot can wake you with your favourite track from Amazon Music Unlimited or Spotify, or your favourite online station from iHeartRadio or TuneIn.

You can also schedule Night Mode, which dims the screen but perhaps not as much as you'd like. You can ask Alexa to disable the screen completely, which is fine unless you want to mute the microphone as this reawakens the display. 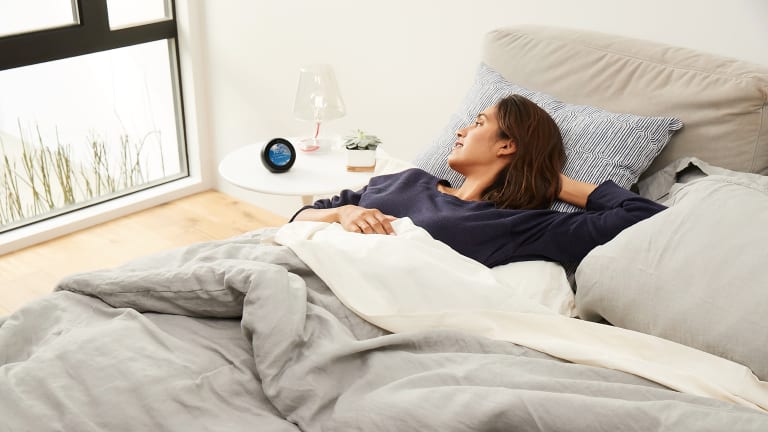 One of the Spot’s most obvious uses is as a smart alarm clock.

Unfortunately the Spot can't be programmed via the touchscreen when you're trying to slip into bed without waking your partner, but thankfully you can set the Spot's alarm using your smartphone. It's a shame you can't use the Spot's screen to silently control smarthome gear.

Of course many people have already abandoned a traditional alarm clock in favour of their smartphone so switching to the Spot might feel like step backwards. Despite the built-in microphone, the Spot lacks the sleep tracking features offered by smartphone and smartwatch apps like Sleep Cycle. You can set the Spot’s alarm to gradually grow louder, but there's no intelligent snooze so each delay buys you another nine minutes in bed.

If none of this is enough to win Amazon’s Echo Spot a place in your home, it’s final trick is the ability to make and receive video calls, thanks to a camera above the screen. You can call other Spots or the Alexa smartphone app, either around your house or in other people's homes.

You can "call" friends and wait for them to answer, with the Echo speakers around their home announcing the incoming call. Or they can give you permission to "drop in" on their Spot which means the call answers automatically with a subtle chime, although the video is blurred for 10 seconds. 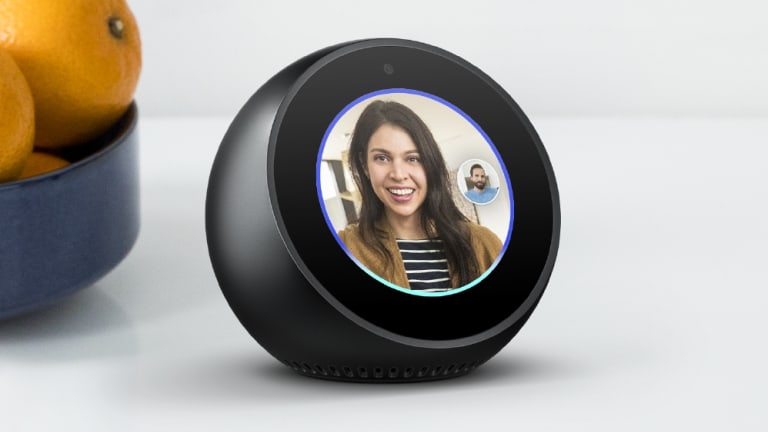 Video calls are neat, but not the best quality.

Voices are clear but the picture quality isn't as good as you'll get on your smartphone. The camera also has a narrow field of view, only letting you squeeze in two people. Apart from video calls, you can also use the Spot to see the view from your security cameras and baby monitor.

The idea of a camera in your home might understandably concern some people, particularly in the bedroom, but the mute button also kills the camera or you can permanently disable it in the settings. You can also set Night Mode and Do Not Disturb times to block incoming calls.

So what's the verdict?

It's good to see Amazon expanding its options in Australia and the Echo Spot is a great size and shape, but you need to decide whether you'd take advantage of the screen often enough to justify the price tag. If you tend to talk to your smart speakers from across the room then the screen perhaps isn't that useful and a cheaper Echo Dot is a better option.

The Spot seems most practical as an alarm clock for your bedside, or video phone for the living area, but $199 might be a big ask when the smartphone in your pocket can do the same job.

British hangman who sent the Beasts of Belsen to hell

Pro-Brexit ‘go-slow’ drivers to be prosecuted