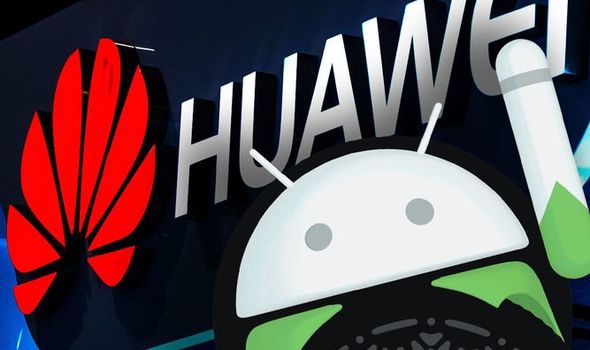 Since 2019 Huawei has been blocked from using any of Google’s apps or popular services due to a US trade ban on the firm. That means if you buy a new Huawei device, such as the P40 Pro, you won’t find any sign of Gmail, Google Maps or the all-important and app-packed Google Play Store.

Ever since the block came into force, Huawei has been busy trying to fix things with the Chinese tech firm launching its own App Gallery store and even moving away from the Android operating system with its next generation of devices all switching over to its own-brand HarmonyOS software.

However, despite all its best efforts, it seems the Google block is really hitting Huawei where it hurts with sales of its smartphones plummeting across the globe. Back in March, it was reported that Huawei had slipped behind rivals such Oppo and Vivo in China and now the same slide has happened in Europe.

According to the new stats from Counterpoint Research, Huawei’s growth fell by a whopping 77 percent in the first part of 2021. 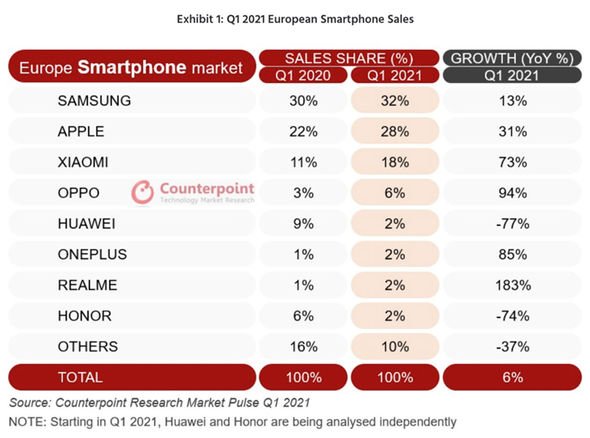 In 2020, Huawei managed to secure nine percent of sales in European markets but this has now fallen to just two percent.

Although that’s terrible for Huawei it has allowed other Chinese brands, which aren’t banned from Google, to fill the void.

Xiaomi and Oppo have both performed well in the first three months of 2021 with Xiaomi seeing 73 percent growth and Oppo getting a whopping 95 percent leap.

That puts these firms in third (Xiaomi) and fourth (Oppo) with Huawei slipping to fifth – just ahead of OnePlus.

Samsung was the main winner of the quarter, having regained the top spot from Apple (although Apple is still the clear leader in France, Germany and the UK).

Speaking about the new stats Counterpoint Research’s Associate Director, Jan Stryjak said, “Q1 2021 was a prime example of the intensely competitive nature of the European smartphone market. January saw Apple as the clear leader following its most successful device launch ever; Samsung rebounded in February on the back of strong sales of its latest flagship Galaxy S21 series and popular Galaxy A series; and then Xiaomi reached its highest market share in Europe ever in March thanks to the launch of its own flagship Mi11 devices. OPPO, OnePlus, realme and vivo also continue to grow strongly, with most having launched new devices in the quarter.”

Huawei is rumoured to be launching its new P50 smartphone soon and this could give the firm a much-needed boost.

However, it’s going to need to convince consumers that they can live without Google before sales will bounce back to levels seen a few years ago.

Will Samantha Markle Ever End the Royal Drama?

The Big Bang Theory season 12: Release date, cast, spoilers and everything you need to know