Apple's big product reveal event overnight was filled with the usual glitzy product videos and new devices but, tellingly, it was the new services that could have more customers reaching for their credit cards.

The addition of a fitness subscription exemplifies Apple's desire to become not only the maker of devices that facilitate content and services for all aspects of your life, but the direct provider and vanguard of those services too. On iPhone this means music, streaming video, news, online storage and video games, and on Watch of course it means keeping fit. 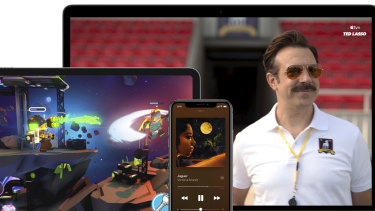 The Apple One bundles will provide customers with savings, but are set to give the company a larger share of the services revenue on Apple devices.

But at a time when Apple is already under scrutiny for its dual role as owner-operator of a massive digital marketplace and as a key competitor in that marketplace, its new Apple One subscription bundle could be seen as an aggressive move to grab a larger share of the services revenue on Apple devices, even if it can also be seen as a potential saving for Apple-loyal customers.

The basic Apple One subscription entitles an individual to Apple Music, Apple TV+ and Apple Arcade access, plus 50GB of iCloud online storage, for $19.95. Unbundled, assuming no student discounts, equivalent a la carte access would cost a minimum of $29.46.

This is a clear value for people who already want to subscribe to these four services, but it also makes competing services much less attractive. Users of Apple devices will be disincentivised to use Google Drive for storage, or Netflix for streaming for example, if they can switch to Apple's bundle and actually save money.

The family Apple One plan, which gives access to those same services to up to six people and increases the storage to a shared 200GB, could also discourage family members from choosing different services, or incentivise families to all choose Apple devices. Of course, as Apple points out, it also makes things easier and less expensive for those already in the ecosystem.

Apple is certainly not alone in leveraging its position to give its services a leg-up on its own platform. Microsoft uses Windows to push its Edge browser almost relentlessly on its users, while Google favours its own Play Store marketplace on Android.

But for Apple, this latest move comes at a time when several big companies — and many smaller developers — are already complaining about how Apple tips the scale by favouring its own offerings, leverages its device software in ways others can't and demands a 30 per cent cut of its competitors' business.

Apple's high-profile legal battle with Fortnite-maker Epic Games has highlighted some of the problems developers have with Apple's practises, with Epic saying the tech giant needs to allow alternate payment methods and storefronts on its ubiquitous platforms. After offering alternative payment methods in breach of Apple's guidelines, Fortnite was removed from the App Store.

Providers of music, ebooks, video and games subscriptions have all complained in the past about the uneven playing field on iPhone and other Apple platforms, and the new bundles are unlikely to make them feel at ease.

Spotify, the music streaming pioneer, has already dubbed the Apple One offerings anti-competitive.

"Apple is using its dominant position and unfair practices to disadvantage competitors and deprive consumers by favouring its own services," the company said in a statement.

"We call on competition authorities to act urgently to restrict Apple's anti-competitive behaviour, which if left unchecked, will cause irreparable harm to the developer community and threaten our collective freedoms to listen, learn, create, and connect."

In a response given to Reuters, an Apple spokesperson said the bundle was designed to save money for existing users of its services, and that "customers can discover and enjoy alternatives to every one of Apple's services."

Services have clearly become a big focus for Apple, with the company attracting tens of millions of subscribers, helping to double its revenue in the past four years. And while the offerings from Apple TV+ to Apple Arcade are slick and exciting enough to warrant every bit of their success so far on their own merits, the decision to bundle them together at a steep discount will surely see still more customers jump ship from competing offerings.

Where to buy the best hot water bottles, including body-length ones

UK could legalise cannabis in next five years say tycoons

Stacey Solomon: Calling me desperate and cheap for being proud of my body is dangerous… and fans are sick of YOU, not me