Apple has embarked on its biggest push yet to dominate the mobile video game industry, greatly expanding the lineup of its subscription Arcade service and shifting its focus from purely new and exclusive games to include more classic and casual mobile-focused fare.

Apple Arcade launched in 2019 and promised more than a hundred console-quality games across all Apple devices for $8 per month. Many games are funded by Apple, none contain ads or additional transactions and you can pick up where you left off during your last game on an iPhone, iPad, Mac or Apple TV. 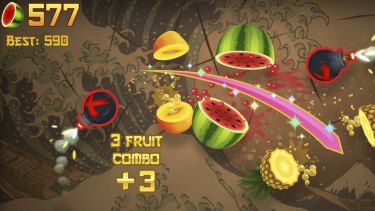 Fruit Ninja is back and free of ads in the “App Store Greats” section of Apple Arcade.

But Apple now appears to be recognising that unique, finite, console-style games aren’t enough to keep a wide base of players engaged. Last week it introduced a significant update that rebranded the existing library as “Arcade Originals”, while also creating two mobile-specific categories in “Timeless Classics” and “App Store Greats”, bringing the Arcade lineup on iPhone and iPad to more than 180 games.

Timeless Classics are the kind of hyper-casual games that for many people typify playing on mobile, like Solitaire, word searches and Sudoku. Meanwhile App Store Greats is exactly what it sounds like, including famous iPhone success stories like Fruit Ninja, Monument Valley, Threes and Mini Metro.

This breaks with Apple’s original vision of exclusive games that don’t appear on any other service; even its own App Store. But these versions differ from the established apps on iPhone and Android by being fully unlocked with no ads or additional purchases.

Developer and conceptual artist Zach Gage, whose games Good Sudoku, Flipflop Solitaire and Really Bad Chess are now included in Arcade, said building in ads and other ways to make money made his games less fun and was a turn-off for his audience.

“One of the biggest things for me is trying to engage with new audiences, and give them the experience of what it’s like to be somebody who enjoys video games … but this is a really hard community of people to reach,” he said.

Really Bad Chess exemplifies the kind of experience Gage is going for. By using the rules of chess but randomising the pieces that each player has to work with, newcomers to the game get to learn without having to worry about memorising specific scenarios. And older chess fans have an easy way in to experiencing the potential of video games.

“The fact that Apple Arcade’s bundled with new devices and comes with all the Apple One plans … for me the most exciting part is being able to access this large new community of people, and be able to hopefully reach out to them and give them something that they’re really going to enjoy and stick with,” Gage said.

Apple Arcade is part of the company’s push into services, along with Apple TV+, Apple News+, Apple Music and Apple Fitness.

Apple doesn’t break out numbers of subscribers for each service, but said in an investor call explaining its first-quarter earnings that revenue from services hit a record high of $US15.8 billion.

In a statement, App Store boss Matt Fischer said Arcade had been a hit with fans and critics alike, but last year a Bloomberg report indicated Apple was looking to pivot from traditional linear video games to more modern designs that drove long-term engagement. The report said Apple had even cancelled in-development games as part of this change in priority.

The selection of Arcade Originals games unveiled last week may bear this out, as they include a version of NBA 2K21 and a collectible heroes battling game based on Star Trek, both of which are designed to be played indefinitely, although they don’t include paid content.

Rumours also persist that Apple is preparing a gaming-focused revision of its Apple TV device that would support 4K 120Hz visuals, like the latest consoles, indicating the company still has an interest in competing in mainstream gaming.

A concise wrap of the day on the markets, breaking business news and expert opinion delivered to your inbox each afternoon. Sign up here.

Sony To Get Away From Gadgets, And Shift To Entertainment And Gaming