Apple is spending "hundreds of millions" of dollars to secure games for its upcoming Apple Arcade subscription service, according to a Financial Times report, with analysts forecasting the program could generate more money for the company than either its news or TV subscriptions.

Citing people familiar with the deals, FT indicates the iPhone maker is spending several million dollars each on most of the more than 100 video games that have been selected to launch with Apple Arcade, with the total budget likely to be more than $US500 million ($697 million). 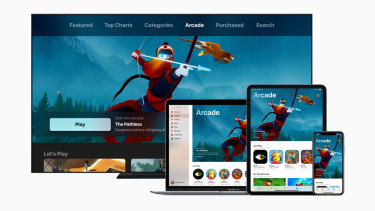 Apple Arcade will be available across iPhone, iPad, Mac and Apple TV.

Apple's biggest move yet into the gaming space comes at a time when watchers of the industry are predicting a paradigm shift away from plastic discs and home consoles, towards subscription services and games streamed over the internet to any device. Google and Microsoft are the first big movers in this space, and Apple clearly wants in as well, but it first needs to establish itself in the market.

Apple Arcade will be part of the App Store, and will focus on games that are exclusive to the service, meaning gamers used to playing on Android, PC or game consoles from Nintendo, Microsoft and Sony will not be able to access them. Arcade games will also not be available to non-subscribers, even if they use Apple devices.

Apple is offering game developers an extra incentive if they agree for their game to be exclusively available on its service, and withhold release on Google's Play store or other subscription gaming bundles such as Microsoft’s Xbox Game Pass, FT says. After a few months, developers would be able to release their games on computers or other games consoles.

Apple Arcade will see players downloading games to their devices, where they can be played even if there is no internet connection available. If they are connected, players will be able to continue their game progress across iPhones, iPads, Mac computers and Apple TVs. The service will be available in Australia in the spring, but Apple has not yet announced a price.

A sizzle reel also showed off games that have previously been announced for other consoles, including The Pathless from Giant Squid, Sayonara Wild Hearts from Simogo and Hot Lava from Klei. Australian-made games confirmed for the service include No Way Home by SMG, Projection: First Light by Shadowplay, Down in Bermuda by Yak & Co and The Artful Escape by Beethoven & Dinosaur.

At the same event, Apple took the wraps off its News+ and TV+ subscription services.

FT cites analysts at HSBC who have have estimated that Apple Arcade revenues will grow from $US370 million in 2020 to $US4.5 billion by 2024. Those figures are greater than its revenue estimates for Apple TV+, at $US4.1 billion by 2024, and Apple News+, which it predicts will generate $US2.7 billion.

Who is Perrie Edwards, who is her boyfriend Alex Oxlade-Chamberlain and when did she date Zayn Malik?