Home » Apple v Samsung: The one big reason why you’re still better off buying an iPhone 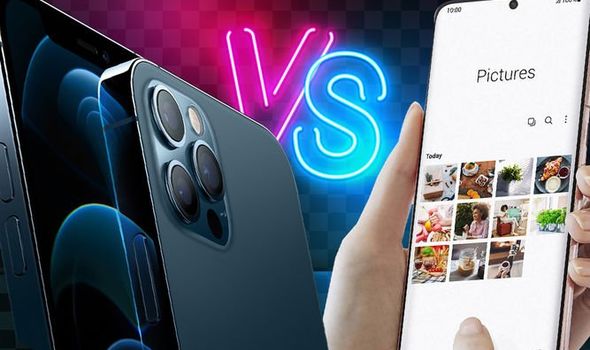 Apple and Samsung remain two of the most popular smartphone manufacturers on the planet. Both have seen huge success over the past six months with the iPhone 12 and latest Galaxy S21 proving to be big hits with their loyal fan base. These devices come packed with market-leading cameras, faster processors and full access to the latest 5G data speeds which allows them to stream and download files at speed of over 300Mbps.

Samsung also added a speedy 120Hz refresh rate display to its S21 whilst Apple tucked its more efficient MagSafe charging into the rear case of its iPhone 12. Having reviewed both devices each certainly has its benefits but it appears there’s one big reason why smartphone fans might still be better off buying an iPhone.

According to new research from US trade-in site SellCell.com, the Galaxy S21 has seen some pretty shocking depreciation rates since it launched in January.

In fact, the firm says that all variants of the S21 have lost almost 50 percent of their value in just a few months.

The same goes for the standard S21 which is now worth 50.8 percent less than its original retail price.

To make matters worse for Samsung fans, the iPhone 12 isn’t suffering anywhere near as badly.

So, why do Samsung phones lose value faster than Apple’s iPhone?

SellCell says that the reasons for this disparity in value are likely to be many. In its recent brand loyalty survey SellCell found that 92 percent of iPhone owners remain devoted to the Apple brand.

Apple owners looking to upgrade their device will, in the majority, stick to the Apple brand. In that sense, demand is high for pre-owned iPhone 12 handsets, meaning that they keep their value as consumers are happy to pay a premium, even for a refurbished or pre-owned iPhone 12.

On the other side, not only do Samsung owners show less loyalty to the brand, but 26 percent of them are happy to consider jumping ship to an Apple device once they’re done with their Android handset.

This has two effects. It decreases demand for Samsung’s handsets, driving the value down, while at the same time increasing Apple demand even further, slowing the rate of iPhone 12 value shrinkage.

EastEnders spoilers: Honey Mitchell set for huge shock as she plans to ask Adam Bateman to marry her

Here’s how Leah Remini reacted to the Danny Masterson charges