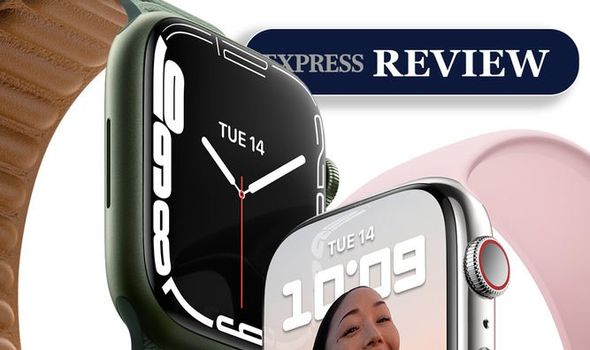 We’re big fans of the Apple Watch and always have been. Ever since the first model launched back in 2014, we’ve had one strapped tightly on our wrists and despite a swathe of rivals – from the likes of Samsung, Huawei, and Fitbit – trying to steal its spot on our arm, this has remained our go-to wearable. Now a brand-new Apple Watch model is launching later this week, which gets a number of upgrades aimed at boosting the overall experience, but has Apple done enough to keep this tech-laden timepiece firmly in the top spot? Here’s our full Apple Watch Series 7 review.

First up, we need to address the design of this new Apple Watch. In the months ahead of launch, there were endless rumours and leaked images purporting to show a radical new look being tested by Apple for its next wearable. The rumoured redesign seemed to take inspiration from the latest iPhone, iPad Pro, and iMac – with sharper edges, flat sides, and a more industrial appearance. This design language has almost completely replaced the soft curved edges that characterised all devices from Apple’s legendary design department a few years earlier …except when it comes to the Apple Watch.

Despite dozens of rumours from usually reliable sources, when you lift the Apple Watch Series 7 out of the box for the first time, you won’t find a futuristic new look. Instead, the case is identical to all of the models that have come before it, including that first version from 2014.

Yes, there are some new colours to freshen things up a little bit, including a striking new Starlight option that replaces Silver and a tasteful Green. But that’s about it and we can’t help feel a tiny bit disappointed.

The Apple Watch Series 7 is available to pre-order from Vodafone on a range on plans. The mobile operator has both the 41mm and 45mm (GPS+4G) models available, with prices starting from £20 a month on a 36 month Watch Plan.

The Apple Watch Series 7 is available to pre-order at O2 from just £17.99 a month. The contract will run for 36 months with the cheapest Apple Watch with O2 being the 41mm GPS and Cellular model with a sports band. This model is available in four colours – green, blue, midnight and starlight.

If you’re looking to purchase the Apple Watch Series 7 in one go then Very has a range of options. From the entry-level 41mm model with a sports band, that’s priced at £369, to the stainless steel 45mm model with a Milanese loop (priced at £699) Very has something for every Apple Watch need and budget.

Gordon Ramsay is selling one of his Cornish homes for £2.75 million after months of rows with locals over lockdown rules