There are the things that happen for consumers who make complaints, and then there are the things that happen for people who write for major websites and newspapers and make complaints. I take the consumer route every time because it tells me how companies treat my readers. So when I complained about leaking Duracell batteries that had a use-by date of March 2024 I raised the matter as long-time consumer of them, not as a journalist.

In May I wrote about the reply I received from the company. Its customer service people told me the company appreciated my message and was concerned. Just not concerned enough to offer me a couple of AAA batteries to replace my leaky ones. Apparently I should have known about removing batteries from devices that were not being used for a few months. Duracell appeared unfazed about its batteries leaking.

The company referred me to an ‘enclosed’ pamphlet on battery care. Given that this was an email the use of the word ‘enclosed’ was puzzling, and no pamphlet was attached to the email. Nor did one follow by mail.

Anyway after the story was published and Duracell realised I was a journalist I was contacted by Nihan Belik Guneri, the company’s marketing and commercial strategy director in Singapore. She apologised for my experience, offered to replace the batteries and the device they were in (which experienced minor, unfatal damage) and asked me to send the leaking batteries in for examination by a quality team. She also arranged a call to Yanira Wells, Duracell’s R&D director for Asia and Australia, who is based in Connecticut, USA.

So I mailed the batteries in and took the conference call from Singapore and Connecticut. 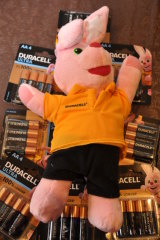 A bunny for my trouble.Credit:Rod Easdown

I guess if I had received Duracell’s ‘enclosed’ pamphlet I would have known all this. I mentioned the pamphlet to Ms Belik Guneri and she seemed to have no knowledge of it, but promised to check with the customer relations folk. It turned up by email a few days later.

Meanwhile I’ve received a slew of messages from readers, and they’re still coming. Lots have experienced leakage with Duracells that in some cases ruined the devices they were in. One reader reported leakage from an Energizer. Lots of people swore by batteries of other brands, ranging from Vartas to K-Mart. Eneloop rechargeables got a big tick from readers.

I sympathise with my readers because I’m pretty sure none of them would have received the attention I got. Duracell’s reaction to me as a reporter for major newspapers and websites was markedly different from its reaction to me as a plain old consumer. Forgive my cynicism, but if I was not a reporter in a big city there’s no sign the matter would have gone any further than it had when I first wrote about it.

You can read Duracell’s ‘Tips for proper battery care and use’ here.